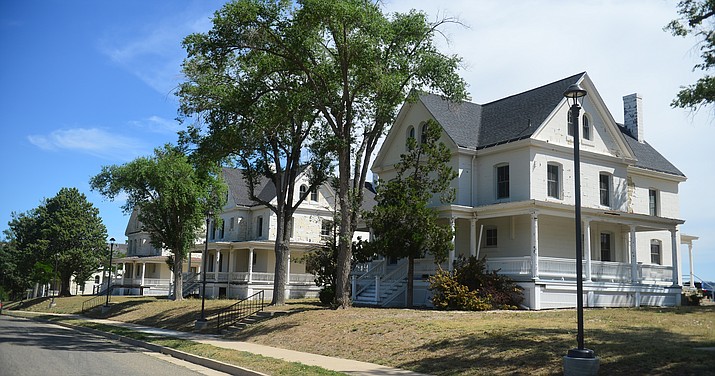 A stately row of one-time VA officer quarters on part of the long-ago Fort Whipple grounds is eyed as a place to give modern and future veterans in need a new chance at dignity.

Local VA leaders have received a federal nod to transform six of the vacant, Victorian-style two-story homes into low-rent studio and one-bedroom apartments for at-risk or homeless veterans.

The way the federal VA intends to do such a multi-million project is through a public/private lease partnership.

The VA will select a private developer, or nonprofit housing agency, to enter into an extended lease of the property — up to 75 years — with the requirements they finance the renovations and restructure the properties into a historically-sensitive veteran neighborhood. In this case, the selected developer can also opt to lease an additional three acres of adjacent open land to build a housing complex.

The lease will be for individual veterans or veteran couples only.

For the most part, the project was viewed as an ingenious way to provide much-needed, affordable and supportive housing for low-income, or homeless, veterans.

VA officials said 116 veterans in Yavapai County are either in transitional or other types of programs in need of long-term, affordable housing. Fourteen of the 80 VA clients with federal housing vouchers are unable to use them because rents in this region are more than the $796 a month allowed with utilities.

The sole concern voiced at the hearing was over future tenant selection.

Several women said they want guarantees the lease stipulates these are veteran-specific apartments.

Local VA Chief Engineer Terry Boyd explained that this is the intent. In the future, however, if needs did change, it is likely a chosen developer could offer a unit to another eligible, non-veteran tenant.

But Boyd suspects that would be a rare, if ever, occurrence.

“I don’t want to live near another ghetto,” declared a woman who refused to give her name.

Another woman, Lyn Anninos, said she wants the lease to be crafted so it is specific to only deserving veterans. If there are not enough at-risk veterans, she and others said the housing should then go to the next tier of veterans, or even veterans who live in other places.

Some also suggested the chosen developer should be required to hire veterans to do the construction work.

A local social worker, Candy Folsom, congratulated the VA on offering this opportunity to preserve historic buildings in a way that offers new life for this nation’s heroes.

“I think this is a beautiful thing that you all are doing,” Folsom said.

The time frame is expected to be between 18 and 24 months, according to Kelli Emery, project manager for the federal VA Office of Asset Enteprise Management.

The next step is to prepare requests for proposals that Emery expects will become available within the next few months. The VA allows a month or so for those to be returned followed by about 60 days before the VA makes a final selection.

To date, the federal VA has entered into 110 enhanced-use lease proposals, 54 of them are veteran housing complexes, Emery said. In all cases, the leases specify veteran preference for the units.

One is a 60-unit complex in Menlo Park, California.

“They are really beautiful projects that we would all be proud to live in,” Emery said.

“We are excited about the opportunity this gives us,” declared Prescott VA Medical Center Director Barbara Oemcke. The VA views this as a chance to answer yet another need of its 28,000 veteran population on a campus where the veterans will have access to just about everything they might need when it comes to medical, recreational, rehabilitation and mental health care, Oemcke said.

John S. Jones, co-founder of the Esperanza En Escalante nonprofit foundation in Tucson, attended the meeting and said his agency operates a 125-unit supportive housing facility for veterans seven miles from their VA campus. This location for permanent supportive housing is simply idyllic, he suggested.

“There is no shortage of veterans who need help,” Jones declared. “A project like this will be enormously helpful.”