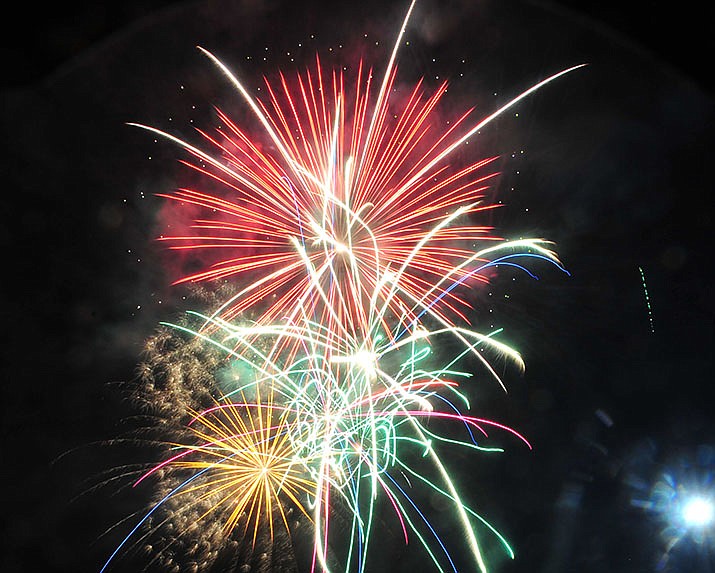 Steve Gottlieb of Prescott Events says he doesn’t want to cancel fireworks in Prescott ever again.

So this year, Gottlieb said he’s shaking things up by shooting fireworks off a barge in the middle of Watson Lake Thursday, July 4. Doing so puts community safety into the No. 1 position, he said.

“Last I heard, water doesn’t burn. It turns to steam,” Gottlieb said. “We’re putting the barge in the direction of the wind flow to take it up the lake, any of the fallout.”

After a disc golf tournament at 8 a.m., the event starts at 1 p.m. and Gottlieb said he estimates the parking to be full by 4 p.m. As such, six buses will be running from Pioneer Park beginning at 2:30 p.m.

In addition to the fireworks, there’ll be nine water slides, three bouncy castles for the younger kids, food trucks and a hydration station with free water bottles for the first thousand kids and refillable water, he said. He’s also licensed the entire ball park to be able to have a selection of beers from Hensley. Music will be provided by the 108th US Army Band, and the Ceremonial Band will perform alongside the fireworks.

Parking is $10, general admission is $5 and an unlimited inflatables pass for the kids that includes general admission is $20. A portion of the proceeds benefits the Boys and Girls Club of Central Arizona. Gottlieb said it used to cost the City of Prescott $100,000 to put on fireworks at Pioneer Park but noted this year, the city isn’t paying for any of it – meaning there’s no taxpayer money going into the event at all.

The fireworks begin at 9 p.m. with a salute to the Granite Mountain Hotshots and Brendan McDonough, the lone survivor, reading the Hotshots Prayer.

“Brendan’s going to start the Hotshots Prayer and there’ll be 19 purple comets that go up singular,” Gottlieb said. “When he finishes, there’ll be a salute going up all at once to them and then we start in with some really big, big fireworks.”

The production of the event has been massive, he said. For anyone who’s never seen a barge show, the reflection off of the water doubles the effect of the fireworks, Gottlieb said.

The event ends immediately after the fireworks. For more information or to purchase tickets, visit www.prescottevents.net/prescott-downtown-fireworks.