Backyard Gardener: What’s up with the beetles that do headstands? 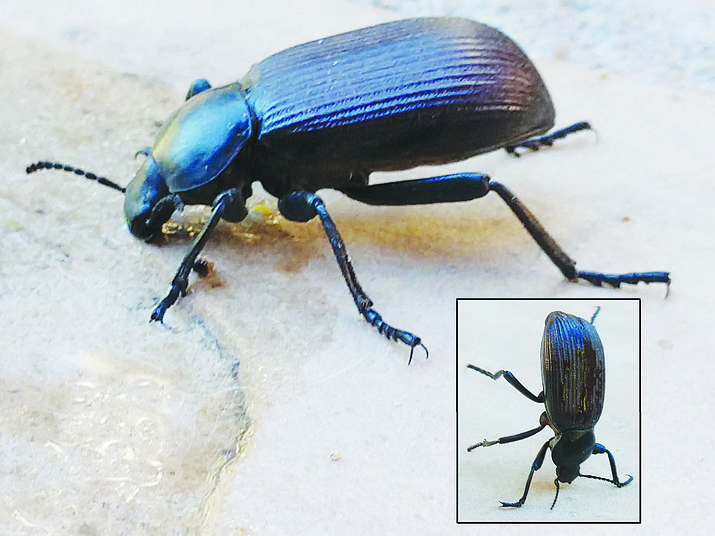 Insects rule in Arizona! New residents and visitors are often surprised by the diversity of insects that live here. The University of Arizona’s insect collection contains approximately two million specimens representing an estimated 35,000 species. Of these, 83% are identified to species level.

I certainly appreciate the diversity of insects we have. In my work with citizens and communities in Yavapai County, the University of Arizona Cooperative Extension is often asked to help identify and suggest management strategies for insects that damage plants and structures.

Pinacate beetles (Eleodes sp.) are a common sight across much of Arizona and there are several species (over 120 species in the Western U.S.). These black beetles are members of a larger group called darkling beetles and can be found across the American West.

Adult pinacate beetles range from 0.4 to 1.4 inches long. They can be observed throughout the year avoiding the hottest part of the day in the shelter of animal burrows and under rocks. Pinacate beetles do not fly and feed on organic debris; they are attracted to moist locations.

Recently, I emptied an ice chest and some moisture was still on the flagstone. Within minutes, a large pinacate beetle appeared and started drinking the water. This beetle is the subject of the accompanying photos and the inspiration for this column.

If you have ever disturbed a pinacate beetle, it probably responded by performed a headstand. It may have also discharged a noxious spray from glands in its abdomen. The compound in the spray is a type of benzoquinone, which has an unpleasant odor and can be irritating to the skin, eyes, and mucous membranes.

I have seen curious dogs get sprayed by pinacate beetles. It is not usually a long lasting effect, but gives the beetle a chance to retreat. It usually requires more than a mild disturbance to initiate getting sprayed.

The above described defense works for many potential predators. However, grasshopper mice are known to grab the beetles and force its abdomen into the soil then proceed to eat the front half of the pinacate beetle. Similarly, scorpions are also known to feed on pinacate beetles by grabbing them with their pincers (pedipalps), pointing the abdomen away, stinging them between body segments, and breaking the beetle apart to eat the soft bits within. It’s a jungle out there for pinacate beetles too!

My retired colleague, Carl Olson, who curated the University of Arizona Entomological collection for many years, wrote a book: Insects of the Southwest coauthored by Floyd Werner. They describe how pinacate beetles can be kept as “pets” in a glass terrarium. They have been observed feeding on a variety of items including dog food, apple cores, lettuce, carrots, and dry corn meal. If moist soil is available and they have mated, they will lay eggs that hatch into larvae appearing similar to mealworms.

Carl recommends feeding them fish food and providing a shallow dish of water. If you or your children want to try this, I would recommend handling the pinacate beetles with gloves and keeping them away from the face and eyes.

In the wild, they are known to feed on Ironwood blossoms, saltbush foliage, and other leaves. They may eat planted vegetable and flower seedlings too. However, I would not get too upset by the presence of a pinacate beetle. They are usually seen walking around all by themselves mostly minding their own business. There is no reason to be afraid of them if you keep your distance from the tip of the abdomen.

As with any of the larger insects, scorpions, and centipedes, the best strategy to keep them out of your house is to maintain weather stripping, caulk around windows and doors, and maintain window screens. Visit the online edition for photos and additional information about pinacate beetles (see URL below).