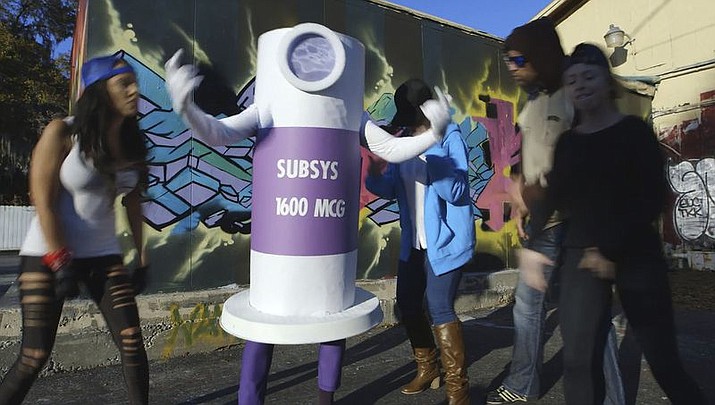 This still image from a 2015 video presented as evidence by the U.S. Attorney's Office in federal court in Boston on Wednesday, Feb. 13, 2019, shows a scene from a rap video made to motivate Insys Therapeutics sales representatives to get doctors to prescribe higher doses of the company's highly addictive fentanyl spray. Prosecutors say 35-year-old Scottsdale native Natalie Levine was sentenced Monday, June 24, 2019, in federal court to five years of probation, the first six months of which are to be served in home confinement. Levine pleaded guilty in 2017 to conspiracy to violate the anti-kickback law. (AP, file)

SCOTTSDALE — A sales representative for a drug maker that prosecutors say schemed to bribe doctors to prescribe its highly addictive fentanyl spray has avoided prison.

Prosecutors say 35-year-old Natalie Levine was sentenced Monday in federal court in Connecticut to five years of probation, the first six months of which are to be served in home confinement. The Scottsdale, Arizona woman pleaded guilty in 2017 to conspiracy to violate the anti-kickback law.

Authorities say in 2013 and 2014 while a sales rep for Arizona-based Insys Therapeutics, Levine paid medical professionals in Connecticut, Rhode Island and New Hampshire to participate in sham speaking engagements to promote the company's medications.

Company founder John Kapoor and four senior executives were previously convicted of their roles in the scheme and the company agreed to pay $225 million.