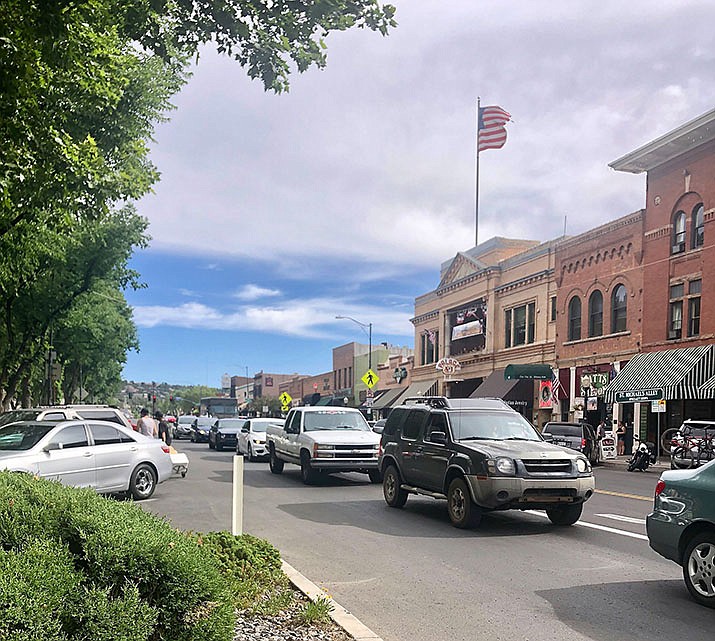 As the summer tourism season heats up, so too does the ongoing traffic jam at downtown Prescott’s busiest corner.

The Gurley/Montezuma intersection lies at the heart of downtown Prescott, and it attracts plenty of traffic – both on the streets and on the sidewalks.

While that is good news for businesses, it can become a challenge for traffic.

As pedestrians fill the crosswalks, vehicles often line up along Whiskey Row, waiting to turn right or left onto Gurley Street.

That intersection and a host of other problems areas were in the spotlight Tuesday, June 25, during a presentation on traffic issues to the Prescott City Council by the City of Prescott Public Works Department.

In the downtown area in particular, it turns out the city’s history is both an advantage and a drawback.

That means the city must work within the parameters of its 1800s-era downtown street layout.

Compounding the situation is a steady increase in traffic numbers. In some areas of town, Mattingly said, traffic counts are already well ahead of projections that were made several years ago for the year 2025.

For several of the council members, as well as members of the public, traffic issues have become a continuing frustration.

Councilman Steve Blair listed a handful of areas that he said are especially problematic. “You have some of these intersections that are so gummed up,” he told Mattingly.

Councilman Phil Goode added that the Gurley/Montezuma intersection is regularly clogged, even though the summer season is just getting started. “During the summer, it’s just a mess,” he said.

Traffic concerns also have come up at two of the recent Prescott City Council candidate forums, with members of the audience pressing the candidates about what can be done to ease the situation.

Mattingly said there are a number of things the city could do to make traffic move smoother downtown. But, he said, “I’ve been hesitant to try some new things, because I didn’t know if the community is ready. But they’re good things.”

One thing that the city has considered in the past is implementation of an “all-walk” or “pedestrian scramble” at the Gurley/Montezuma corner. That would involve regularly stopping all vehicular traffic to allow pedestrians to cross in any direction.

Mattingly questioned whether that would solve the problem at Montezuma and Gurley, however.

“The real solution would be to remove the ‘bulb-outs’ and pull back some of the parking,” he said, referring to the landscaped curb extensions that extend into the street.

Although the bulb-outs lend to the attractiveness of the downtown, Mattingly noted that they also block right turns. That, in turn, causes right-turning cars in the single lane of traffic to stop for pedestrians — effectively blocking all traffic behind them.

Rather, Blair suggested that the city should look into prohibiting right turns onto and off of Whiskey Row, and directing traffic to the next block.

“It’s a good idea,” Mattingly responded, adding that prohibiting a left turn onto Whiskey Row from Gurley would also help. Still, he pointed out that some businesses might have concerns about restricting traffic onto their street.

City Manager Michael Lamar noted that prohibiting left turns onto Whiskey Row from Gurley would have a side benefit of routing more cars past the city’s Granite Street parking garage, which could increase the use of the parking garage.

Public works officials said the purpose of Tuesday’s meeting was to address a list of problem areas that have been identified around town.

Other areas that came up Tuesday included:

• The left turn into the Lowe’s Home Improvement store from Highway 69.

Blair expressed frustration that the left-turn light stays red for the duration of cycle — “for what seems like a half-hour” — even though drivers can clearly see if there is oncoming traffic. “I’ve run that red light numerous times,” he said.

Mattingly pointed out that the light is on a state route, and is under the jurisdiction of the Arizona Department of Transportation.

Even though Rosser is a major east-west route, Mattingly said the street is a special case because of the many homes that border it. Noting that the speed limit “should be 30 or 35,” he said the city set the speed at 25 in an effort to balance the traffic-carrying aspects with the residential uses.

After the meeting, Lamar said city staff would compile a detailed plan for dealing with some of the issues and take the matter back to the council for further review within the next two months or so.