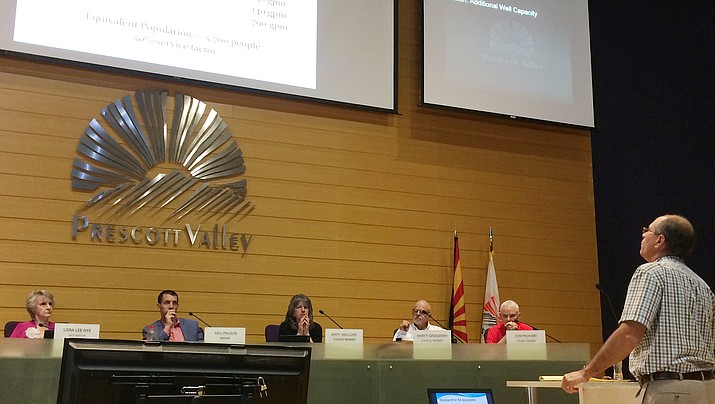 Some of Prescott Valley’s wells could not pump water 24 hours a day, every day of the year. Not because they ran out of water, but because the state water regulator, Arizona Department of Water Resources (ADWR), allowed a specific amount of gallons in a given time frame.

The town now has permission to increase the capacity — not the amount of water — allowed at each well, Neil Wadsworth, Utilities director for Prescott Valley, told the Town Council June 20 at the council study session.

“We can pump more water out of the ground (at each well site), but we still can’t exceed our allotment,” Wadsworth said.

In the past, once a well reached the amount of water allowed, the town took it offline and rerouted water from other wells to continue service to residents and businesses. Now, the state has given permission to exceed each well’s previous capacity per year.

Keeping wells online but unable to pump water because of capacity limits, was expensive. After 2007, Wadsworth said, the town took six wells offline in order to save about $500 to $1,000 per month in electrical power costs.

He also discussed improvements that included the new wells and re-equipping existing wells that added or re-established about 3,290 gallons per minute capacity, or enough water to service 23,700 people.

“That doesn’t mean we are serving 24,000 more people,” Wadsworth said.

The Little Pete Well is not yet online, and workers just completed drilling the Antelope Park Well, which will need another two months before going online. These two new wells will be able to deliver 2,500 gpm (Little Pete at 2,000 gpm and Antelope Park at 500 gpm), enough for 18,000 people.

Vice Mayor Lora Lee Nye said she hopes residents will “pay attention and back off and not be so anxious,” with this news. “We’re not running out of water,” she said.

In other business, council heard from Public Works Director Norm Davis on two joint road projects with Yavapai County and the Arizona Department of Transportation. One project will add a second lane to Viewpoint Drive by widening the roadway to Pronghorn Ranch Parkway from the westbound off ramp of the highway. A second entails a free-flow right turn lane on the off ramp to southbound Glassford Hill Road extending to Tuscany Way.

Council also heard an update on security cameras newly installed or repositioned both inside and out at the Civic Center, library and police station.