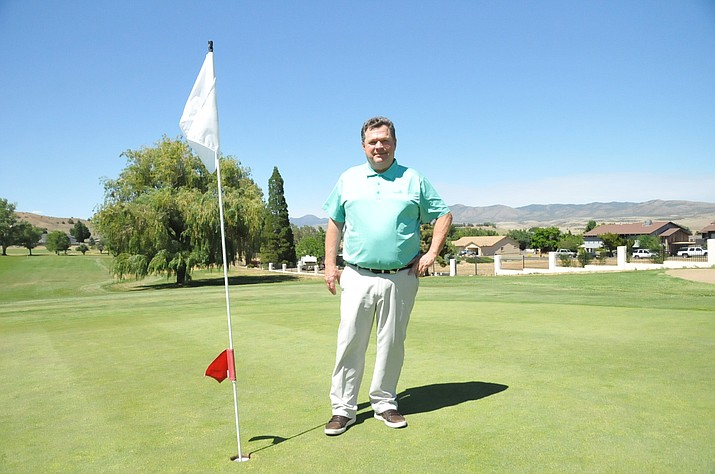 New Prescott Golf Club General Manager Rick Reed, who started working at the course near Dewey on June 17, stands at the ninth hole of the course on June 19. (Doug Cook/Courier)

DEWEY — For the second time in six months, Prescott Golf Club is under new management in hopes of refurbishing the 48-year-old course and its amenities for members and the public.

On June 17, Scottsdale-based OB Sports Golf Management took over operations of the club near here from Southwest Golf Management, which had been running the course since January.

Prescott Golf Club member Carlos Gonzales works on his putting on the practice green at the course near Dewey on June 19. (Doug Cook/Courier)

“We met with OB Sports, and we were impressed with their capabilities, their depth, and the resources of the company,” Prescott Golf Club President and CEO Michael Mathews said June 19. “Our big goal is to continue making improvements to the golf club and have opportunities to restore the course to its prior successes.”

Formerly Prescott Golf & Country Club, established in 1971 at 1030 Prescott Country Club Blvd., between the Bradshaw and Mingus mountain ranges, the semi-private Prescott Golf Club currently has around 100 members, most of whom are retired and live in the community. (Mathews said his eventual goal is to have more than 200 members.)

“Most members are avid golfers who are looking for a place to recreate and socialize,” said Mathews, who has owned a summer home at the club since 2007 and re-branded the club’s name in April.

OB Sports, which describes its services as “boutique-style golf course management” to individually cater to each of its venues and its clientele bases, operates more than 70 golf courses and private clubs in the U.S. and internationally.

Recently purchased by corporate golf management giant Troon, OB Sports operates at least 25 courses in Arizona, including ones as close to Prescott Golf Club as Sedona Golf Resort, Pinewood Country Club in Munds Park (south of Flagstaff), and Chaparral Pines and The Rim Club in Payson.

“These guys being with Troon, it’ll be OK,” longtime golf club member Fred Boehm said of the course being under new management. “It’s the best-kept secret in town.”

“It’s close to our headquarters and it’s a great location,” Green added about Prescott Golf Club.

Green said the golf course here could use some “TLC,” from improved maintenance to organization in the clubhouse. He’s drafting a “specific plan” for the course, which he intends to complete in the next 30 days.

In late May, the course suffered a water main break in its 50-year-old piping, which hindered irrigation of the course’s greens for several days, although the system was back up by June 5. Some dry spots remain visible on the course, but it is coming along.

“We will improve every aspect — the course conditions, service levels, training of staff and food quality,” Green added. “There are plenty of opportunities for catering and banquet activity. You will see fairly noticeable changes fairly quickly.”

Mathews bought the club in October 2017. He had hired PGA golf pros Wyatt Collier, who was director of club operations, and Justin Henderson to help him manage the course. They are no longer with Prescott Golf Club.

On June 17, Mathews brought on Rick Reed as his new general manager and head golf pro. Reed’s in charge of the 35 to 40 OB Sports employees on-site. They work in food and beverage services, golf course maintenance, the golf shop, and as golf instructors, Green said.

Reed relocated from Sandpines Golf Links, a course that he managed for OB Sports in Florence, Oregon, 50 miles west of Eugene, for the past four years. He’s worked in the golf management business for 20-plus years.

“We want to create an area where people can come out and enjoy the course and have an excellent food and beverage experience,” Reed said. “I plan on being here for many years.”