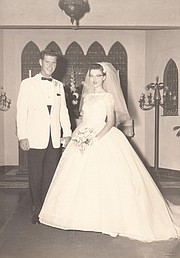 Ross “Sam” and Pat Pool will celebrate 60 years of marriage on July 3. Sam was born in Texas and raised in California. Pat was born in northern England, the family immigrating to the U.S. when she was in her early teens. Sam was a career Air Force enlisted man, spending the majority of his time overseas. They met when Sam was attending the wedding of his best friend in high school, who just happened to be to Pat’s sister. Sam retired from the Air Force in 1973. They lived in Southern California until 1997, when they relocated to Prescott. The Pools have one son, Jon Pool and his wife, Jessica, and one grandson, Ben Pool, who all live in Prescott.