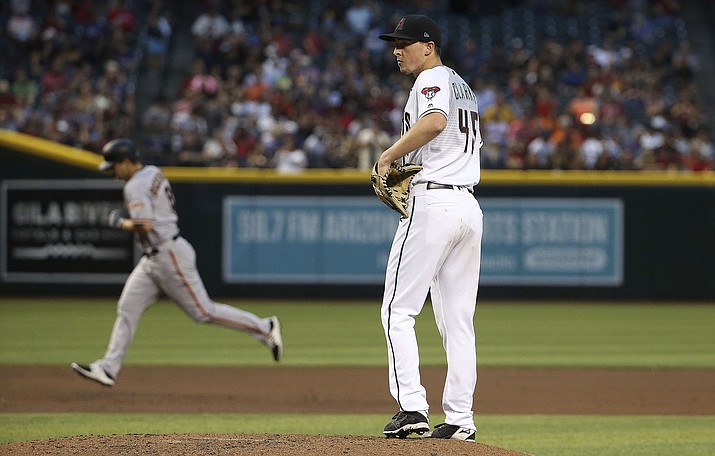 PHOENIX — Alex Dickerson's day started in Las Vegas with a call-up to the big leagues.

It ended with a big jackpot in the desert.

Dickerson had a grand slam and six RBIs in his San Francisco debut, Kevin Pillar had four RBIs and the Giants rolled over the Arizona Diamondbacks 11-5 Friday night.

"I don't know if you can have a better debut than that," Giants manager Bruce Bochy said.

Dickerson started his Giants career with Triple-A Sacramento, but got the call to the majors when Steven Duggar went on the 10-day injured list with a lower back strain.

The River Cats were playing at Las Vegas, so Dickerson had a much shorter trip to the majors than some of his previous call-ups. He made the most of the extra rest, crushing his second career grand slam 458 feet to center off Taylor Clarke (1-3) to put the Giants up 6-0 in the third inning.

Dickerson added a two-run triple in the seventh, finishing a double shy of the cycle. His six RBIs are most in a Giants debut and the homer was his first in the big leagues since 2016.

"It's a long day," he said. "I felt pretty good the entire day, all day, well-rested. Just added a little travel to it and try to play a baseball game."

Pillar hit a two-run homer off Clarke in the second inning and had a two-run single in the seventh after Arizona rallied with five runs against Jeff Samardzija (4-6).

Arizona's Nick Ahmed hit a two-run homer a night after being struck on the left hand with a pitch and leaving in the fourth inning.

The Diamondbacks loaded the bases against Dereck Rodriguez in the ninth inning, but Will Smith struck out the final two hitters.

"We never really got anything going on the mound early on and we fell behind," Diamondbacks manager Torey Lovullo said. "We made some mistake pitches to good hitters and they took advantage of those mistakes and jumped out to a huge lead." 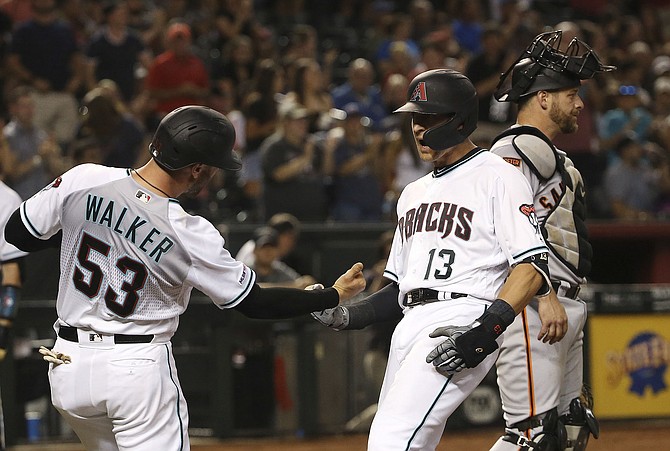 Samardzija allowed four runs on a season-high nine hits in five innings in a loss to Milwaukee his last start. Staked to a 6-0 lead against Arizona, the right-hander nearly coughed all of it up in the third and fourth innings.

Ketel Marte, who tripled his first at-bat, had a run-scoring single in the third, but left with a left groin cramp after pulling up running to first. He has six straight multi-hit games, one short of Luis Gonzalez's team record set in 2001.

Ahmed hit his two-run homer in the inning and Ildemaro Vargas, Marte's replacement, followed with a run-scoring single. Adam Jones hit another RBI single to pull the Diamondbacks within 6-5 before being thrown out at second.

Samardzija bounced back, retiring the next six batters to complete six innings.

"Obviously, there's mixed emotions about the night as a whole, but when your teammates pick you up and give you 11 runs, it makes it a whole lot easier to swallow," said Samardzija, who allowed five runs on nine hits. "Some good and some bad."

Clarke earned his first big-league win against the Giants on May 25. The right-hander was pulled with no outs in fourth inning this time, giving up seven hits.

"I felt like I got ahead of guys and then didn't make the pitches to put them away," he said."

The Giants also claimed OF Joey Rickard off waivers from Baltimore and transferred RHP Nick Vincent (pectoral strain) from the 10-day to 60-day injured list. Rickard will report to Sacramento.

Arizona optioned 1B Kevin Cron to Triple-A Reno and will make a corresponding move on Saturday. Cron hit .217 with four homers and 11 RBIs in 22 games during his first stint in the majors.

Arizona: RHP Jon Duplantier had a clean follow-up scan on his right shoulder and played long toss before Friday's game. ... The Diamondbacks said Marte is day to day and will get a day off on Saturday.

Giants RHP Tyler Beede (1-2, 6.67 ERA), Saturday's starter, is coming off his first big-league win after holding the Los Angeles Dodgers to a run on three hits in six innings. Arizona RHP Zack Godley (3-4, 6.52) gets another crack at starting on Saturday, his third since being bumped to the bullpen after a shaky beginning to the season.