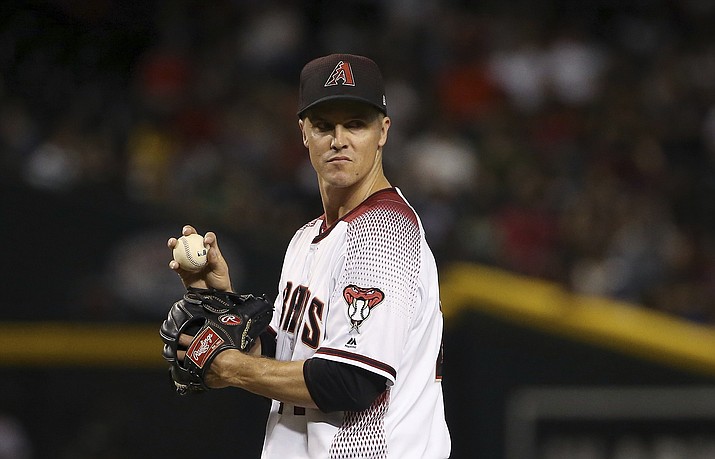 PHOENIX — Ryan McMahon hit a tiebreaking, two-run double in the seventh inning to make up for a costly error, and the Colorado Rockies added on in a 6-4 win over the Arizona Diamondbacks on Wednesday night.

McMahon had three hits and three RBIs. Jon Gray (7-5) held the Diamondbacks to one earned run over six innings, and Daniel Murphy homered as the Rockies rallied from a 2-0 deficit for their third victory in four games.

It wasn’t all good news for the Rockies, though — shortstop Trevor Story exited in the sixth with an apparent injury.

Greinke (8-3) allowed five runs and 11 hits in seven innings, his scoreless streak ending at 17 innings. Pinch-hitter Kevin Cron had a solo homer in the ninth off Rockies closer Wade Davis, and Arizona brought the potential tying run to the plate. Davis got David Peralta to line out for his ninth save.

McMahon’s single in the eighth made it 6-3. The Rockies have at least 12 hits in six straight games, tied for the longest such streak in franchise history.

The Diamondbacks scored first with the help of McMahon’s error at second base in the second inning. Nick Ahmed hit a grounder, and McMahon missed tagging Christian Walker running from first base to second and dropped the ball, allowing Eduardo Escobar to score from third.

Greinke’s fielder’s choice drove in Walker for a 2-0 Diamondbacks lead.

The Rockies tied it on Murphy’s swing with two outs in the fourth. He drove a 2-0 pitch from Greinke onto the pool deck in right field for his sixth home run of the season.

David Peralta drove in Arizona’s third run with a single in the seventh. Peralta has reached base safely in 13 straight games.

Greinke tried to help his own cause in the fifth, leading off with a single. But he decided to try to stretch it into a double and was thrown out, left fielder Raimel Tapia to McMahon for the tag.

Story attempted his own hustle double in the sixth, but Diamondbacks center fielder Jarrod Dyson threw to Ahmed for the tag on Story.

Tim Locastro was hit by a pitch for the 12th time this season — in only 93 plate appearances. That’s a Diamondbacks record for before the All-Star break.

The Diamondbacks agreed to terms with their top two picks from this year’s draft, outfielder Corbin Carroll (No. 16 overall) and pitcher Blake Walston (No. 26).

Walston attended the game, and Carroll is expected at Chase Field on Friday.

Rockies: Story appeared to be injured on his headfirst slide into second in the sixth. After the inning, he was replaced at shortstop by Pat Valaika.