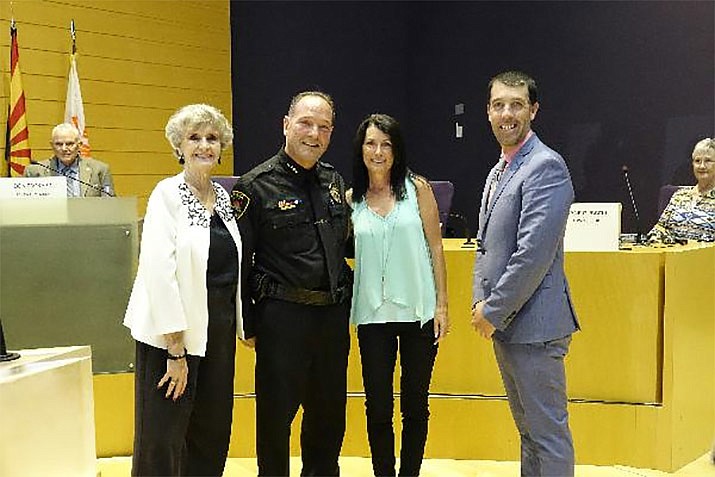 The Prescott Valley Town Council honored Police Chief Bryan Jarrell at the council meeting June 13 on his retirement after five and a half years in the community. From left are Vice Mayor Lora Lee Nye; Jarrell; his wife, Tina Jarrell; and Mayor Kell Palguta. (Heidi Dahms Foster/Courtesy)

Prescott Valley Town Council, staff, and members of the community honored Police Chief Bryan Jarrell — as he gets ready to retire from his leadership position in the Police Department — at its regular council meeting Thursday, June 13.

“Being a police chief is not a popularity contest, it is about protecting the community, and you have done an outstanding job in raising the bar in this community, for your profession and for this team,” Town Manager Larry Tarkowski said of Jarrell whose last day on the job is June 21.

Council members approved the consent agenda and the request for zoning map change on 48 acres located east of Highway 69 and south of Bradshaw Mountain Road without discussion.

This and a second request for zoning map change on five acres on the southeast corner of Viewpoint and Long Look drives, also approved, were on the agenda as second readings and resolutions. Both projects have had public hearings; the Planning and Zoning Commission has reviewed the requests and recommended the council approve the plans.

Also at the meeting, Town Clerk Diane Russell explained how an updated version of the video software, Granicus Peak Agenda Management, would improve the 16-year-old system that records and broadcasts council meetings. Council unanimously approved $7,000 to purchase the software.

Under new business, the council discussed a final condominium plat on a 94-unit commercial warehouse/office space on five acres located west of Lake Valley Road and south of Highway 69.

Individuals will own their units rather than lease them. This allows maintenance and administration to the Lake Valley Business Park Condominium Association.

It was first approved by P&Z in 2007, said Town Community Development Director Richard Parker. The economic downturn put the project on hold. It recently received a certificate for assured water use by the state. Council members had no discussion on this matter following Parker’s presentation, and it approved the final plat unanimously.

The Town Council next meets in study session at 5:30 p.m. Thursday, June 20, in the auditorium of the Prescott Valley Public Library, 7401 E. Skoog Blvd.