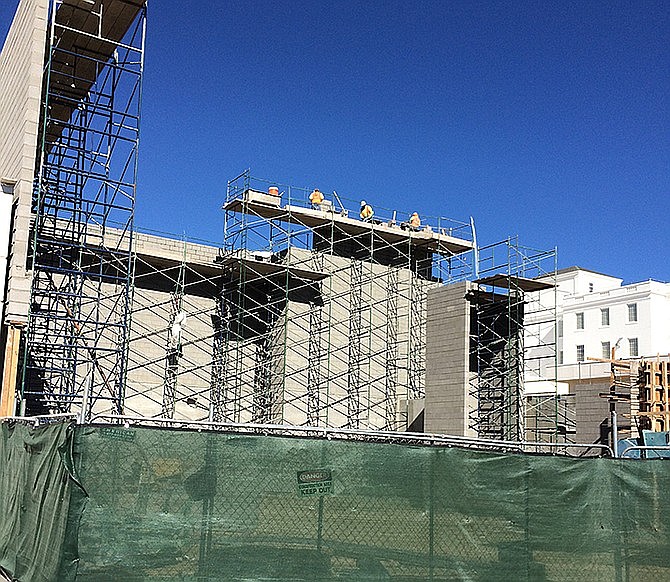 The federal VA is investing big bucks into the local VA that has a history dating back into the mid-1800s.

The one-time Fort Whipple located on what is now 164-acre campus for the Northern Arizona Veteran Affairs Health Care System (NAVAHCS) off Highway 89 has been a construction zone for much of the last year.

Over the last couple years, the federal VA funded more than $30 million of building projects, including $10 million for a new, 18,000 square-foot laboratory/pharmacy building scheduled to open in September.

At the same time, the VA will cut the ribbon on a similar size, similar price building adjacent to the existing 85-bed Community Living Center (CLC) that will provide a new sterile processing center and expand rehabilitative services for CLC patients.

Those dollars also include a $10.2 million renovation and expansion of the existing radiology department.

The VA, too, was given 5.4 million to construct a new warehouse facility near the baseball fields. That project is expected to get underway this summer.

VA Chief Engineer Terry Boyd has been the go-to guy on all of these projects.

And his plate is not emptying any time soon.

In the next three years, the Prescott VA will be undertaking another estimated $50 million worth of projects, including a three-story, 400-space parking garage to assist with the perpetual parking congestion at the medical center, Boyd said.

The parking garage is slated to be built below the chapel area not too far from the main entrance with plans to have a walkway from the top tier that will allow patients to go directly into the main patient care areas, VA leaders said. The completion date for that project now is 2022.

In the next year or so, the pressing projects are construction of a new prosthetics and occupational therapy center, a new education center and an expansion of existing primary care medical services.

This year, the VA is also slated to be granted about $9 million to do a complete renovation of the 120-bed Domiciliary, a short-term, in-patient rehabilitation treatment program for those with substance abuse and mental health issues, as well as those experiencing homelessness.

On Wednesday, June 26, the VA will have a 3 p.m. public hearing in the theater of Building 15 related to another multi-million dollar project, a public/private partnership that would enable six former officer quarters to be transformed into housing for homeless, or near homeless, veterans.

If the federal VA officials approve, a lease of up to 75 years would be awarded to a private developer or agency that agrees to finance, design and renovate the properties into affordable housing for eligible veterans.

The selected developer would also be able to lease three adjacent acres of land to build new construction for a similar purpose.

As the VA is located on a historic property with aged landmark buildings, Boyd has stated on repeated occasions that many of them are requiring some significant upgrades, and expansions, to meet the growing needs of veterans in Northern Arizona.

For more than a decade, the VA was in a holding pattern on getting the needed approvals and dollars to do these various projects.

So Boyd and other administrative team leaders are happy to see the dollars coming forth so they can enhance the facilities and services they can offer to veterans.

“There is a lot of excitement about what’s happening here,” concluded the VA Medical Center Director Barbara Oemcke.