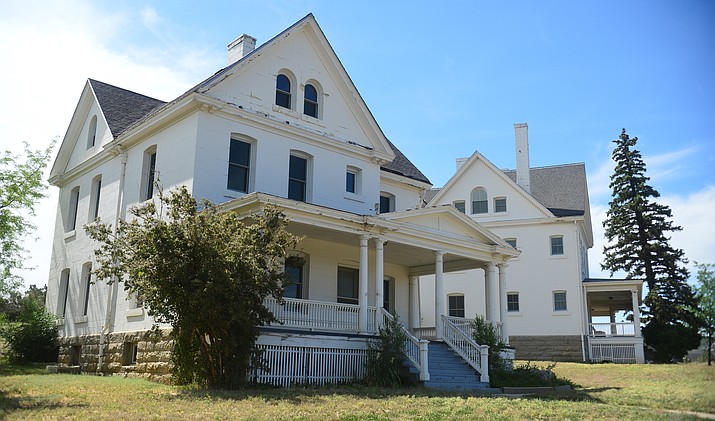 Officers Row on the Prescott VA campus is a procession of 11 stately, 1900s two-story/attic homes with gabled pitched roofs, cream-colored exteriors and a plentiful supply of tall, light-capturing windows.

All but one is abandoned now – the VA has an idea to bring them back to life as supportive housing for homeless veterans.

Northern Arizona Veteran Affairs Health Care Systems will have a public hearing on an enhanced-use lease of six historic properties on its Prescott campus off Highway 89 on June 26 at 3 p.m. in the theater of Building 15. For more information, call Public Information Officer Mary Dillinger at 928-717-7587.

These homes were once occupied by 20th century United States Army officer families stationed at Fort Whipple, the precursor to the modern Northern Arizona Veteran Affairs Health Care System (NAVACHS) that provides medical and mental health care for some 28,000 veterans over 65,000 square miles.

The Victorian-revival style homes are suffering from neglect – the exterior paint is peeling and front wood stairs and railings are cracked and broken. One-time gardens are now clumps of weeds.

Inside there are holes in the ceilings, stains on the walls and carpeted-over wood floors that need to be refurbished.

Time is slowly robbing these historic, more than 6,000 square-foot homes of their elegance.

Only one has been restored – the yellow and green-trimmed Fort Whipple Museum that sits on the far northern corner. All those interior rooms are now exhibit space that tell the story of Fort Whipple and the Army Hospital that were the precursors to what exists on the now 164-acre campus today. 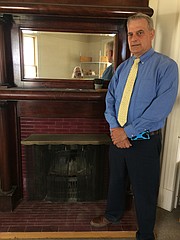 Prescott VA Chie Engineer Terry Boyd stands next to a mahogany fireplace in one of the historic officer quarters’ proposed as part of an enhance-use lease that would enable a private developer to convert the homes into supportive housing for homeless veterans. (Nanci Hutson/Courier) 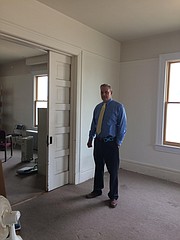 Prescott VA Chie Engineer Terry Boyd stands in the center of a former dining area in one of the historic quarters included in an enhanced-use lease proposal. The public hearing is scheduled for June 26 at 3 p.m.(Nanci Hutson/Courier)

Inside the third house up what is known as Headquarters Hill is a front parlor with a still magnificent mahogany-framed fireplace.

The mantle is dusty, but its one-time beauty is still recognizable. Between the parlor and dining room are now-rare, sliding pocket doors that just need a coat of paint. Newly installed windows in these structures offer perfect views of the city’s rolling landscapes.

VA Chief Engineer Terry Boyd bears great affection for these historic places. He offers a tour to show off such things as the former butler pantry, the ballroom-style attics and coal chute and shed down below.

Their preservation is something he and other VA leaders have longed to achieve, yet for many years it seemed like a pipe dream. The potential cost to repair and refurbish these old buildings seemed beyond reach.

The federal Department of Veteran Affairs’ is enabling the Prescott VA to seek an enhanced-use lease program for six of the houses.

The way the program works is an up to 75-year lease would be granted to a qualified private developer selected by the federal VA to renovate and convert these properties into supportive housing for homeless, or near homeless, veterans. The VA also intends to lease three adjacent acres for new construction

This is a program the federal VA has initiated in other states.

The first step is a June 26 public hearing scheduled for 3 p.m. in the Prescott VA’s theater located in Building 15.

The VA will describe the proposal that would enable a developer to likely create four to six studio and one-bedroom apartment in six of the buildings. As part of the proposed lease, a developer would be required to “finance, design, develop, construct, operate and maintain the supportive housing initiatives,” according to the hearing notice.

Boyd explained the VA is partnering with the federal Office of Asset Management in Washington, D.C.

This is not a short-term project, Boyd explained. He expects it will take at least two years between the hearing and any awarding of a contract. Renovations and construction likely will take another year.

Boyd, though, is enthusiastic about the possibilities. This project would preserve and repurpose historic structures to answer a need he and fellow VA leaders know will exist into the foreseeable future.

“This is huge,” said Ed Shier, a VA mental health official who for years has managed the homeless veteran program.

The Prescott VA is now assigned 80 federal housing vouchers to benefit its homeless veterans. The rental rates in this region, though, are such that right now there are 15 veterans with vouchers who have been unable to find apartments that meet the under $800 a month voucher rental criteria.

U.S VETS Prescott Executive Director Carole Benedict said this is a “really exciting project” as it offers aging veterans a chance to live where they are near the support and health care they require.

The national U.S. VETS agency was awarded an enhance-use lease for a project in Los Angeles, California.

Even with her agency preparing to open a 150-unit complex at year’s end for this population, Benedict said the need is greater than what any one agency can provide.

“This is a really meaningful use of space,” Benedict said. “The historic meaning of those old officer quarters is real special, and that just makes this project all the more meaningful to all those involved.”