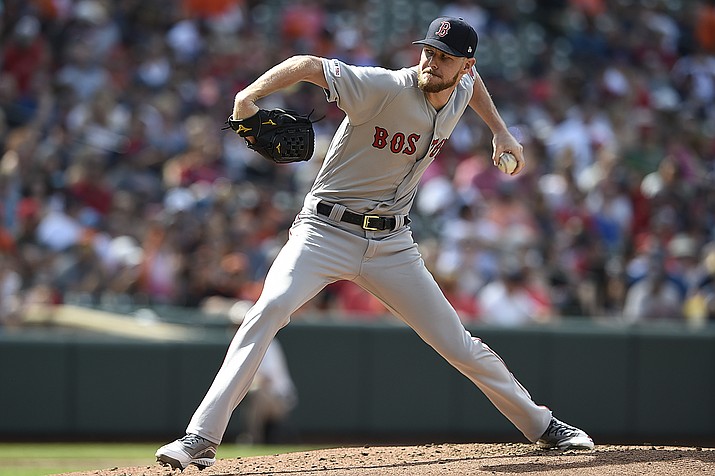 CHICAGO (AP) — Gleyber Torres hit a two-run homer and the New York Yankees stayed perfect when they use an opener, cooling off the Chicago White Sox with an 8-4 win Saturday night.

Torres capped New York’s four-run fourth with his 15th homer off Reynaldo López. He also had a sacrifice fly.

The Yankees have been battling the Rays for the division lead for much of the season, and help is on the way.

New York acquired Edwin Encarnación on Saturday night in a trade with the Seattle Mariners for minor league pitcher Juan Then. The 36-year-old Encarnación leads the AL with 21 home runs.

Chicago had won five of six to get back to .500 for the first time since April 5.

Domingo Santana singled twice for Seattle, which lost for the third time in five games.

Trading Encarnación was the latest indication the last-place Mariners are looking toward the future after beginning the season 13-2. Seattle traded Jay Bruce to Philadelphia on June 2.

Sale (3-7) gave up two runs, six hits and a walk. Both runs came in the sixth, after the left-hander extended his streak of innings without allowing an earned run to 22. Sale ended his outing by blowing a third strike past Keon Broxton with runners on the corners and Boston nursing a 3-2 lead.

Morton (8-1) struck out nine in six innings, giving up four runs on five hits in his first loss since Aug. 11.

David Fletcher, Justin Bour and Kevan Smith homered for the Angels, who won for the fourth time in five games.

It was a big comeback for the Phillies, who looked poised to lose for the fifth time in six games and fall 3½ games behind their rivals in NL East race.

Braves starter Sean Newcomb had a scary moment in the third inning when he was struck on the back of the head by J.T. Realmuto’s ground-rule double. He walked off the field under his own power.

Hernández hit his seventh homer in the fourth.

Alvarez became the fourth player in major league history to hit four home runs in his first five games. He sent a solo drive into the upper deck in right field and finished with three hits.

CINCINNATI (AP) — Jeff Mathis had a pair of hits and drove in a run, Mike Minor pitched into the seventh inning for his first win in nearly a month, and Texas won its second straight over Cincinnati.

The Rangers took advantage of three Reds errors and finally got some runs for Minor (6-4).

The lefty gave up Yasiel Puig’s two-run homer and Curt Casali’s solo shot in 6 1/3 innings for his first win since May 20. Shawn Kelley pitched the ninth for his eighth save in 12 chances.

The Giants rallied from a 5-1 deficit for their fourth straight win.

Christian Yelich hit his major league-leading 26th homer for the Brewers, who have lost three of four. Yelich extended his hitting streak to 12 games and Manny Piña also homered for the Brewers.

Giants reliever Trevor Gott (3-0) pitched an inning and got the win.

Bieber (6-2) allowed four hits and struck out 12 in 7 2/3 innings. Detroit managed only one baserunner through the first six innings before scoring twice in the seventh.

Martin provided the highlight of the game in the eighth, taking off from third while reliever Victor Alcantara was preparing to make a pitch. Alcantara stepped off and threw to the plate, and although the ball arrived at the same time as Martin, the Cleveland runner’s hand knocked the ball away as he reached for home.

Brad Hand earned his 20th save in 20 chances.

Detroit manager Ron Gardenhire was ejected in the sixth.

The first three Cleveland runs came in the fifth off reliever Nick Ramirez (3-1).

Garrett Cooper and Harold Ramirez each had three hits for the Marlins while Starlin Castro knocked in the go-ahead run in the fifth.

The Pirates have lost eight of nine.

Lopez (5-5) gave up seven hits and one walk. He struck out four.

Sergio Romo earned his 12th save in 13 opportunities.

Pirates’ 24-year old right-hander Dario Agrazal, a native of Panama, made his debut. He pitched four innings and allowed six hits and three runs, two earned, while striking out three.

NEW YORK (AP) — Second baseman Jeff McNeil made a game-saving throw from right field to home plate for the final out, and New York held off St. Louis after starter Noah Syndergaard exited with a strained right hamstring.

Pete Alonso smashed a mammoth three-run homer for the Mets off the facing of the third deck in a five-run first inning against Michael Wacha (4-3). J.D. Davis homered and had four hits, finishing a triple short of the cycle. And this time, New York’s beleaguered bullpen finally held on.

Syndergaard (5-4) reached for his right hamstring after throwing a pitch in the seventh. He threw 102 pitches and was charged with five runs, four earned, and six hits in six-plus innings.

Dexter Fowler homered early and had three RBIs for the Cardinals, who stole six bases — their most in 20 years.

MINNEAPOLIS (AP) — C.J. Cron drove in the go-ahead run for Minnesota with a sixth-inning double, making Jake Odorizzi the second 10-game winner in the majors this season and capping a comeback victory.

Jorge Soler sent Odorizzi (10-2) and the Twins to an immediate deficit with a towering two-run homer in the first, and Whit Merrifield’s solo shot started a two-run fifth inning that ended with a 4-1 lead for the Royals.

The Twins they surged back against Royals starter Glenn Sparkman (1-3) with a solo drive by Max Kepler and a two-run smash from Marwin Gonzalez.

The teams played in front of Minnesota’s fifth sellout crowd of the season, thanks to the pregame ceremony for Joe Mauer’s uniform retirement.

Jansen hit Kris Bryant in the arm leading off the ninth. Rizzo followed with his 19th homer.

Jansen (2-2) retired the next three batters, including two on strikeouts, to end the inning.

Kyle Ryan (2-1) got the victory with one-third inning of relief.

Buehler struck out six and walked none.

Alex Verdugo homered leading off the fourth to give the Dodgers a 1-0 lead.

Darvish gave up one run and two hits in seven innings. He struck out 10 and walked one.

San Diego third baseman Manny Machado had two hits and scored twice before being ejected by plate umpire Bill Welke in the fifth inning after a called third strike.

Ian Kinsler had three hits and three RBIs for the Padres, who nearly rallied from a six-run deficit for the second straight night.