Family influence: Of all his titles, Yavapai County superintendent relishes ‘Dad’ and ‘Grandpa’ the most 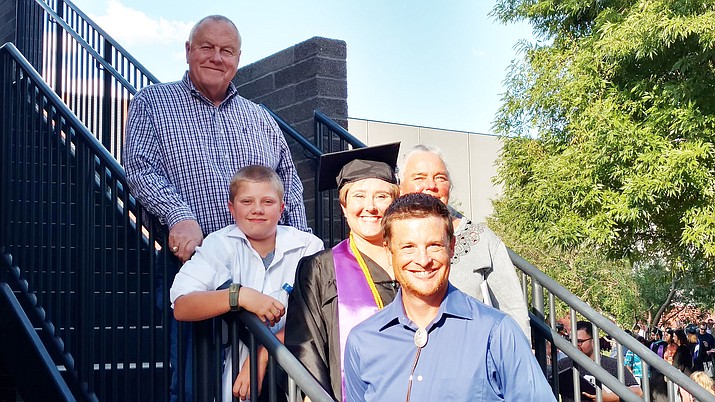 Across four-and-a-half decades, Yavapai County Schools Superintendent Tim Carter has inspired countless students to excel beyond their own expectations. He did so as a high school and college-level government and law teacher, as an assistant and high school principal, and as a girls and boys cross-country and track coach.

Those who know him best — family and those who count themselves as family — said he is not above pushing students, athletes, even politicians, to be more than they think they can be.

And they are grateful.

“He always had high expectations. He always pushed me to be the very best in every aspect of life,” said Carter’s eldest, daughter Cierra McMahon, 32, an elementary special education paraprofessional in the Chino Valley Unified School District. Her son, Skyler Vorpahl, 12, will be a seventh-grader at Heritage Middle School in Chino Valley.

Carter’s son, Levi, 30, is a conductor for the Burlington Northern Santa Fe Railway who lives in Flagstaff.

A Newseum photo of Tim Carter and his grandson in Washington, D.C., looking at the nation’s Capitol. (Tim Carter/Courtesy)

“He’s (Carter) kind of a John Wayne kind of figure to many,” said Stan Goligoski, the executive director of the Yavapai County Education Service Agency.

A two-decade United States Army major, Goligoski was recruited and hired by Carter after he retired from the military in 2013.

Goligoski counts his one-time government teacher and hurdling coach as one of the “most influential people in my life.”

Like Wayne’s movie characters, Carter never shirks responsibility, or steps softly when it comes time to take a stand, he said.

Those who know him best know him to be a no-nonsense man of principle who backs up his words with action. He is never one to preach from the sidelines, Goligoski said.

The first time Goligoski said he witnessed Carter’s “Teddy Bear” side was when he took the title, “Dad.”

Carter said he will never forget the day he became a father — 13 years after marriage.

“We moved to Prescott because we wanted to start a family, but then it didn’t happen,” said Carter, 66, of his wife, Linda, his Grand Canyon University sweetheart and fellow educator.

The couple opted to adopt.

The Carters picked up Cierra in Flagstaff in May 1987. They then immediately drove to Tucson for a state track meet.

Carter’s wife said she will never forget the look of panic on her husband’s face when a sprinter climbed to the top of the bleachers, cradling their “tiny, tiny infant” in his arms. 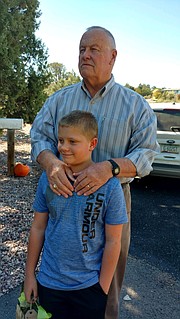 “Oh my gosh. She was indoctrinated into our family — early,” Linda Carter said of how both their children were embraced from birth into an extended family of students, athletes and fellow educators.

All 400 seniors surprised him with baby gifts — every kind of rattle and stuffed animal imaginable.

“It was wonderful,” he declared.

Surprises for the Carters, though, were not quite over.

The couple learned a few months after Cierra’s arrival that they were expecting a baby.

“It all turned out just fine,” Carter declared.

From all accounts, Carter embraced fatherhood as he does everything in his life — full steam ahead.

Linda Carter admits parenting required some juggling — Carter is clear he and his wife were a parenting team.

For the most part, the Carters managed to coordinate career and family life so they were a strong presence in their children’s lives. Both coached their various sports teams — Cierra pursued gymnastics and was the first Badger springboard diver. Levi played soccer and basketball, and in high school ran track and played football as both fullback and linebacker.

“Both of them were good kids. And they’ve turned out to be good adults,” Carter said.

Carter’s office speaks to his love for his family — a “Dad” coffee mug is on a shelf and framed family pictures surround his desk. His computer screen saver is a photo of his grandson wielding a fishing rod.

“He’s a great Grandpa,” Cierra said. She said she and her brother tease him about how he has mellowed since they were children.

“I am beyond blessed to have my parents step up to help me in the way that they have,” she said.

The Carter boys are all “best buddies,” his daughter declared.

THE ROLEs OF ‘DAD’ and ‘GRANDPA’

On this Father’s Day, Cierra said she has a surprise gift for her Dad – one she hopes conveys how much his love and encouragement has meant to her as she forges her path forward.

“I intend to tell him I’m starting my master’s degree (in educational instruction and curriculum) because of his support,” said Cierra who will be taking online courses through Grand Canyon University where she earned her bachelor’s degree and where her parents earned their undergraduate degrees. “It’s going to be an emotional moment for him.”

“Being a parent is one of the most demanding, yet satisfying, things you’ll ever do,” Carter said. “For me, being an educator helped me be a better father, and a better grandfather.”

Father’s Day? Carter welcomes the day as a chance to do what he does every year — give thanks.

“I just enjoy them where they are … and spending time together.”

‘Excitement in the air’ on first day of school
Going the extra mile: Prescott Unified faculty honored with awards
Prescott war hero devoted to giving back to his hometown that instilled in him his patriotic values
Teacher of the Year: Goligoski wins top award
Education and community in Prescott, but always brothers first