Days Past: Geronimo and Wyatt Earp: More similar than you think 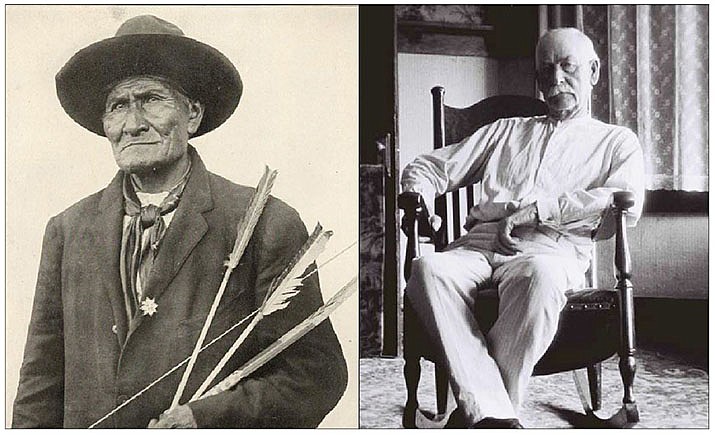 Wyatt Earp and Geronimo came of age on the Arizona frontier at roughly the same time, and their reputations have lived on into the 21st century, becoming our biggest Wild West celebrities.

But they’re rarely talked about together. Did these legendary men have anything in common? Surprisingly, yes.

Earp and Geronimo came from very different cultures, but their lives bore remarkable similarities. Both were defined by a desire for revenge. It drove them and shaped them, and it’s why we remember them. Both were said to be immune to bullets, but in very different ways. Both battled serious addictions and had final, touching and ultimately failing battles with different demons before death.

Probably the most formative event in Geronimo’s life occurred in 1851 when a group of Apaches traveled to Janos, Mexico, on a trading expedition. Mexican soldiers attacked and killed Geronimo’s wife, Alope, their three children and his mother, Juana.

In his autobiography, Geronimo said he “vowed vengeance upon the Mexican troopers who had wronged me, and wherever I saw anything to remind me of my former happy days, my heart would ache for revenge upon Mexico.”

Born Goyakhla – which in Apache translates to one who yawns – Geronimo earned the name he has today when, along with Cochise and Mangas Coloradas, he led an Apache ambush on the troops responsible for killing his family.

He charged his enemies repeatedly with so little concern for his safety that the Mexicans cried out, “Cuidado! Geronimo!” -- Watch out! Geronimo!

Historians believe the terrified soldiers were calling on St. Jerome to save them from the blood lust of this fierce fighter, and their Spanish pronunciation of St. Jerome morphed into Geronimo.

The loss of his family stayed with Geronimo all his life. On his deathbed, when friends tried to talk to him about his earlier conversion to Christianity, he shut them down, preferring to speak about his biggest regret.

Wyatt’s desire for revenge grew out of the OK Corral fight on Oct. 26, 1881, in which the Earp brothers and Doc Holliday killed Cowboy outlaws Tom and Frank McLaury and Billy Clanton.

The trouble didn’t end there. Two months later, on Dec. 28, 1881, the remaining Cowboys ambushed Virgil Earp, badly wounding him. And in March of 1882, they shot Morgan Earp in the back as he played pool in a Tombstone saloon.

Another bullet slammed into the wall above Wyatt’s head, barely missing him. As Wyatt cradled his dying brother’s head, Morgan made Wyatt promise to get the men responsible.

Up to then, Wyatt had been a stalwart lawman. But now, as a U.S. deputy marshal, he went on a killing spree.

On his so-called Vendetta Ride, Wyatt killed four men without ceremony or hesitation. He found one of his victims at the train station in Tucson as he and Virgil were escorting Morgan’s body back to California.

Frank Stilwell and Ike Clanton were waiting to ambush the Earp party. Clanton fled before Wyatt could get to him, but Stilwell wasn’t so lucky. The coroner’s report makes it clear that what took place was basically an execution, up close and personal.

From the report: “Death was evidently instantaneous although the expression of pain or fear on the face would seem to indicate that the man was aware of his danger, which he sought to avert with his left hand, as it was burned and blackened with powder, that being the same charge which entered the breast, as was evident from the close proximity of the gun when it was fired.”

In his diary, Tucsonan George Hand wrote that Stilwell “was the worst shot up man I ever saw.”

Wyatt’s vendetta killings became part of his legacy. He rode out of Arizona Territory with a murder rap over his head for which he never answered.

Leo Banks is a free-lance writer from Tucson. This article is a preview of a presentation he will make at the 16th annual Western History Symposium scheduled for Aug. 3 at the Prescott Centennial Center. The Symposium is co-sponsored by the Sharlot Hall Museum and the Prescott Corral and is open to the public free of charge. For more details, call the Museum at 928-445-3122 or visit the sponsors’ websites at www.sharlot.org and www.prescorrcorral.org.