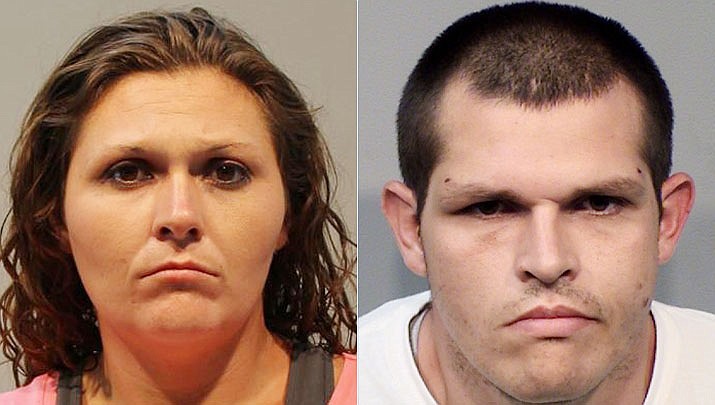 Two Chino Valley residents were arrested on May 31 for allegedly writing a string of bad checks and then selling items purchased with the checks online.

The Chino Valley Police Department (CVPD) first got word of the criminal activity on May 29 after receiving a fraud report from A2Z Home Center in Chino Valley, according to a CVPD news release.

Officers learned that Kristina Craft, 32, and Mark Norris, 29, had bought numerous tools from A2Z Home Center and wrote two separate checks totaling $2,277.68 for the items. One of the checks was written for over the amount the tools cost, so an employee attempted to contact Norris to refund the money for the amount the check was written over for.

When the employee couldn’t reach Norris at the number listed on his rewards card, she became suspicious and decided to search for Mark Norris and Kristina Craft on Facebook, CVPD was told. She found Craft was selling the items they had bought on Facebook Marketplace for cheaper than they had purchased them for.

The next day, a plain-clothed officer contacted Craft on Facebook and arranged to buy one of the allegedly stolen items from her. When they met, the officer verified Craft was in possession of several of the items purchased with bad checks from A2Z Home Center, so uniformed officers from CVPD and the Yavapai County Sheriff’s Office moved in and took Norris and Craft into custody, CVPD reported.

Officers were granted consent from the homeowner where the two suspects were staying to look for additional items and managed to recover many of the items purchased from A2Z Home Center. Some of the items not recovered were as follows:

Anyone with information on these items is encouraged to contact CVPD at 928-636-4223.

During the investigation, officers also learned Norris and Craft had written a bad check at Bonfire restaurant in Chino Valley on May 28 for the amount of $233.13, CVPD reported.

Both suspects were booked into the Yavapai County jail for trafficking in stolen property (felony), fraud schemes (felony) and issuing a bad check (misdemeanor). Norris has a prior drug-related felony conviction from 2012.