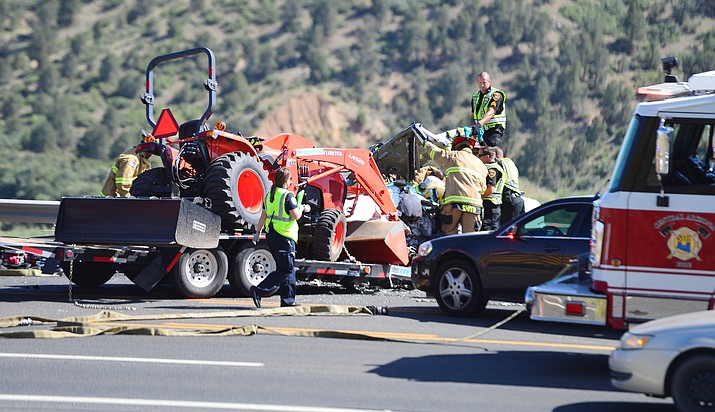 Emergency personnel try to free a victim trapped in her car after a trailer came unhitched and collided head-on with her car on Highway 69 at Mendecino Drive in Prescott Valley Friday, June 7, 2019. (Les Stukenberg/Courier)

An 82-year-old woman remains in critical condition after a head-on collision on Highway 69 at Mendecino Drive in Prescott Valley Friday, June 7.

The victim, Ingrid Hovis, was driving along the highway in her 1999 Buick at about 3:10 p.m. when a trailer with a small tractor on it became detached from a three-quarter ton Dodge pickup, according to the Prescott Valley Police Department (PVPD). The trailer crossed the center divider and struck the Buick head-on.

Hovis was wearing a seatbelt but still received life-threatening injuries, PVPD reported. She was transported via ambulance to Yavapai Regional Medical Center East campus and then flown to John C. Lincoln Deer Valley in Phoenix, where she is still being cared for. The Dodge pickup was not involved in the crash and no one other than Hovis was injured.

Impairment does not appear to be a factor in the collision, PVPD reported.

Police said the investigation is ongoing and that it has not yet been determined whether or not the driver of the Dodge pickup will receive a citation.