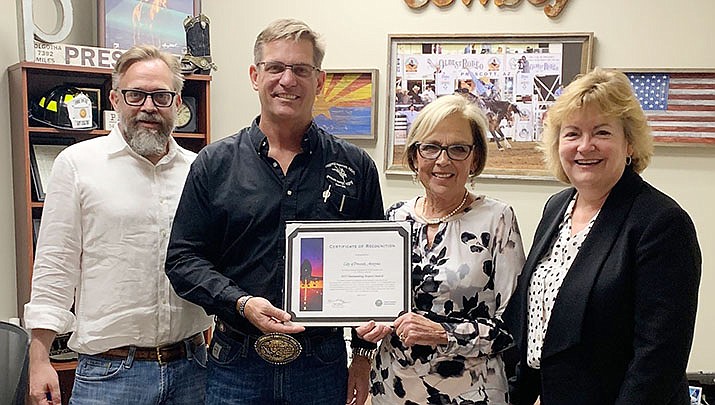 Prescott Regional Airport, Ernest A. Love Field, has been named the 2019 Outstanding Airport by the Federal Aviation Administration (FAA) for the Western Pacific Region, the city released Friday, June 7.

According to the FAA, “This award is granted in recognition of the exemplary work done by the city in proactively completing a Prescott Regional Airport – Ernest A. Love Field master plan with significant involvement from the community, focus on enhancing safety of the Airport, and accommodating continued growth in commercial passenger service.

"The city’s creativity, engagement, and passion for their community and airport speaks volumes about the nature and values of the city organization and staff.”

“This reflects on city leadership, including staff and elected officials,” she said. “Also, I want to thank our commercial air carrier United Express, operated by SkyWest Airlines, as well as our airport staff.”

Sobotta added, “We remain appreciative of the tremendous support that the city has received from the FAA Phoenix Airport District Office and the FAA Western Pacific Region leadership and staff. Continued strengthening of our interagency partnerships — at the federal, state, and regional levels — will be critical to our future growth and success, as we elevate to Primary Commercial Service Airport status this year.”

Prescott Mayor Greg Mengarelli agreed with Sobotta’s remarks, saying: “The city has an amazing team, who has accomplished so much in such a short time. We are proud of our airport staff, and all city support personnel who have helped get us to this point.”

In other news, the City of Prescott will receive $1 million in state transportation funding, plus a grant award of $807,000 (95% of design costs) for the “Taxiway Charlie” Relocation, and other projects related to the new terminal and airport expansion.

Additionally, the airport recently reported hitting a new record high in passenger enplanements (boardings) in the month of May with 2,598 passengers boarding flights out of Prescott.

Previously, December 2018 held the record with 2,574 passengers. Planes have been averaging 80-plus percent filled, putting Prescott Regional Airport on track for 25,000 enplanements in 2019.

Design of the new passenger terminal is scheduled for a fall groundbreaking.