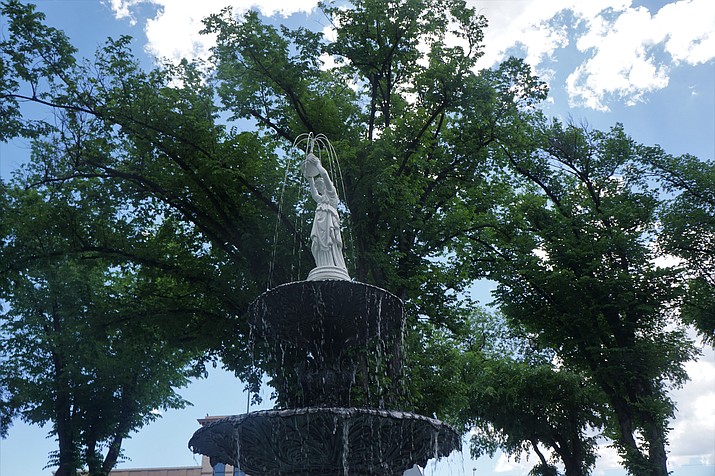 The “Lady Ermintrude” statue was restored to the Yavapai County Courthouse Plaza in 2018, after being removed and stored away in 1976. An informational plaque will soon be installed to explain the history of the statue. Water in the fountain was turned on in early May. (Cindy Barks/Courier)

A plaque telling the story of the “Lady Ermintrude” fountain on the courthouse plaza caused some debate about spending procedures at a Yavapai County Board of Supervisors meeting this week.

The matter, which was originally on the list of routine consent-agenda items for the supervisors’ June 5 meeting, was removed for more discussion. It involved a $3,021 county expenditure.

Supervisor Craig Brown led off the discussion, questioning Facilities Director Ken Van Keuren about the process used to pay for the plaque.

“Has the plaque already been made?” Brown asked.

When Van Keuren responded that the plaque had, indeed, already been made and delivered to Yavapai County, Brown complained that the action had been done “in advance” of the supervisors’ approval.

“So we ordered something and basically paid for it in advance of the board approving the expenditure, correct?” Brown asked “Who authorized it, Kenny?”

Van Keuren explained that the bulk of the cost had been paid through a $25,000 donation by residents Nancy and Pat O’Brien, and the county’s $3,021 cost covered shipping.

In response to the questioning by Brown, Supervisor Rowle Simmons interjected that he was “really, really insulted by this. This Lady Ermintrude is a phenomenal project, at virtually no cost to the county.”

Simmons, who was instrumental in getting the “Lady Ermintrude” statue restored to the fountain on the courthouse plaza in 2018, maintained that Brown’s comments were “tarnishing the value of this very positive thing … which we’re extremely proud of.”

Brown said, “The point of this is not the plaque, which is absolutely fabulous. The point is bringing it to us after it’s already been done.”

The statue, which dates back to 1910, had been absent from the plaza fountain since 1976, when it began showing signs of wear and was removed and placed in storage.

The wording on the plaque explains the statue’s return to the plaza. It states: “In 2016, as the centennial of the laying of the cornerstone for the courthouse was approaching, Yavapai County Supervisor Rowle Simmons and Facilities Director Ken Van Keuren discovered the surviving components and the restoration process began.”

Supervisor Jack Smith added that although he supported the plaque, he also wanted more information in advance of such actions.

“The plaque’s awesome, and it’s going to be great down there,” Smith told Van Keuren. “Just let us know what’s going on prior to it being brought to the board.”

The supervisors ultimately approved the expenditure in a unanimous vote.

After the meeting, Van Keuren said the plaque would be installed at the fountain in the coming weeks.