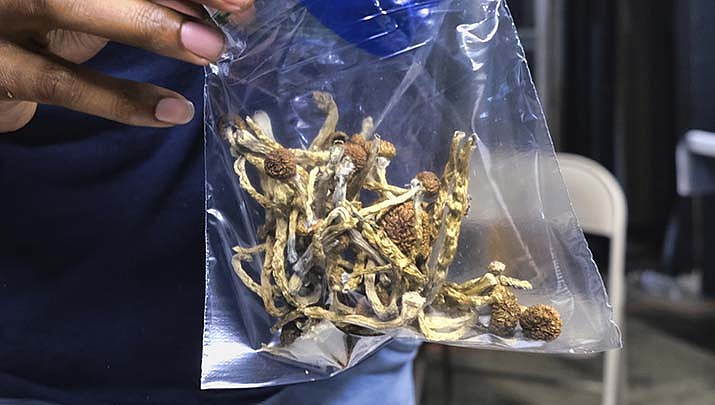 In this Friday, May 24, 2019 photo a vendor bags psilocybin mushrooms at a cannabis marketplace in Los Angeles. Oakland City Council voted Tuesday, June 4, 2019, to decriminalize the possession and use of entheogenic, or psychoactive, plants and fungi. (Richard Vogel/AP)

• MAGIC — That’s what they call them: “magic mushrooms.”

They are not the bad ones you found in the forest and shouldn’t have eaten while camping; no, they’re psychedelic mushrooms, which Denver voters — and now the City of Oakland — have “decriminalized.”

That means they still are illegal under federal and state laws, but they are now a “last priority” for Denver and Oakland police, as a councilman said: to let police focus on serious crime.

Right, just like all those Coloradoans (or medical marijuana card-carrying Arizonans) who have “an ache” and a doctor they’ve never seen before opened the door for them to a new, old medicine?

For me, seriously, I’m with the critics.

Magic mushrooms are still considered Schedule 1 drugs (Controlled Substances Act), categorized as drugs that have potential for abuse and “no medical value.”

Officials in Denver and Oakland say they would establish rules and regulations about the use of “such substances,” including what exactly can be used, how to use them and what the associated risks are.

The first time someone is involved in a car accident, wigging out on ’shrooms, the concern will rise.

This is not about what you do at home. This can affect every one of us. I pray this is not the next ballot initiative coming here; oops, no — that’s legalizing pot (or trying to again).

There is something wrong with society!

• SEX OFFENDERS — Here’s the next one on my list this week – of how society has a problem, but the “fix” may not be what they truly imagined.

The governor of Alabama has a bill on his desk that would require child sex offenders to undergo chemical castration.

Heck, I thought they were going to say something about Daddy with a shotgun as the answer.

• YOUTUBE — While you’re still pondering what I meant by that shotgun remark, consider some good – no, this is great news! YouTube — that website where anyone can post videos — is finally going to police itself.

You may have heard about Fake News. Well, some of the stuff on the site is practically blasphemy.

How bad could it be? Try videos that claim the Holocaust did not happen, or how about the Sandy Hook mass shooting was a hoax. Folks, this is content that denies well-documented, violent events of history. Whether it was 20 children and six educators or 6 million Jews, it is simply wrong.

You cannot re-write history or deny truth, and this goes well beyond hate speech. It defies logic. Kudos to YouTube.

• PICK OF THE WEEK — (Proving there’s always something good to do in the Prescott area that’s cheap or free): Kind Defined Kindness Craze Challenge, 9 a.m. to noon Saturday, June 8, at the Gateway Mall, 3250 Gateway Blvd., Suite 516, Prescott. A two-week challenge focused on lending a hand to others through acts of kindness. Free food and music by Smoke & Mirrors. www.kinddefined.com, 928-582-1012 or kinddefined@gmail.com.