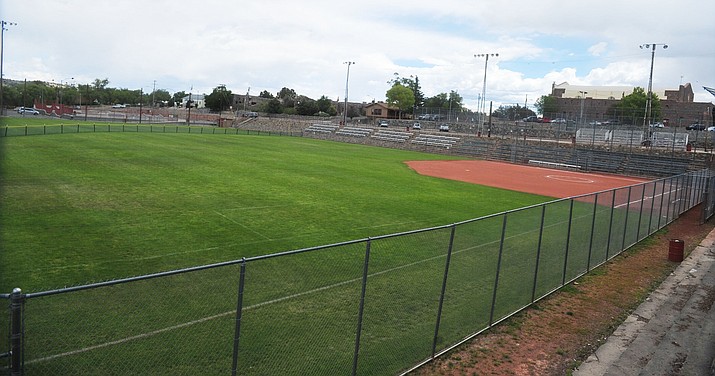 The City of Prescott is working with Prescott High School to host football games this fall at Ken Lindley Field as a $2.5 million turf field, track and LED stadium lighting project is being installed at Prescott High School's Bill Shepard Field.(Les Stukenberg/Courier)

PRESCOTT — With an LED stadium lighting system that can be flipped on using a cell phone already in place, construction began this week at Bill Shepard Field to install a state-of-the-art $2 million artificial turf and track that will likely serve Prescott High School and the surrounding community for years to come.

And with the project scheduled to take at minimum 90 days, if not longer, Prescott football and its fans will get a chance this fall to go back in time and experience the game where it used to be played back in the late 1960s: Ken Lindley Field.

Prescott Athletic Director Missy Townsend said the Badgers could likely play two, if not three games at the field formally known as “City Park” this fall. 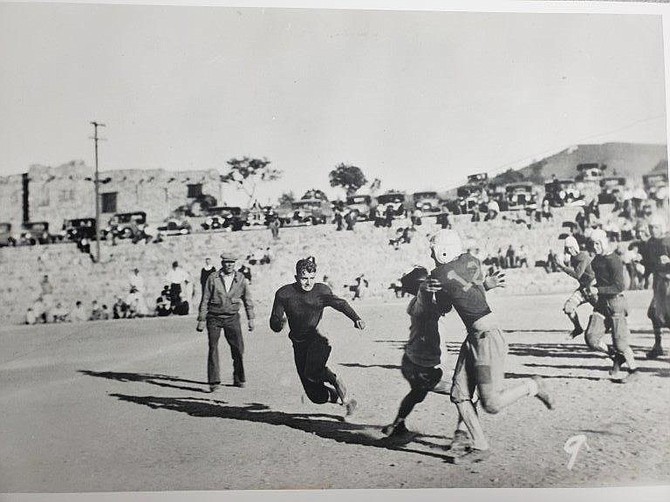 In this undated photo, high school football takes place at what was then known as “City Park” in Prescott. The Prescott football team is slated to play two to three games at Ken Lindley Field this fall while construction crews install a state-of-the-art turf field, track and stadium lights at Bill Shepard Field. (City of Prescott/Courtesy)

“Obviously it's a pretty massive project. There will be lots of factors that will play in to it, like weather, and other [situations we can’t think of],” Townsend said.

And with the AIA releasing the 2019 schedule earlier this week, that means Prescott would face Canyon Del Oro (Aug. 30), Moon Valley (Sept. 13) and potentially their Grand Canyon region opener against Flagstaff (Sept. 20) at Ken Lindley Field.

“We’re going to turn it into a party,” Townsend said excitedly, adding she’s paired with the student council and other administrators to plan activities. A kickoff barbeque at the Prescott Unified School District (PUSD) office and a parade to the field prior to kickoff is just one of several ideas they’ve discussed.

“We want our community to feel a connection to the school, and we feel this will be a great opportunity for people to come out and experience [it all],” Townsend said. “For people to see as they are driving by on a Friday night, and be like, ‘Oh, what’s this?’ Come to one of these games at Lindley and see that energy.”

Plans are in place for food trucks, snack bars, extra bathrooms and solving the biggest question of all: Where does everyone park?

Townsend said the school has an arrangement with Yavapai College to allow fans to park on campus and the district will use a shuttle system and bus them to Ken Lindley Field. There’s also parking around the field itself, and within the surrounding neighborhood.

With $474,000 already spent on the new LED stadium lighting system, the project is likely to run the district about $2.5 million in total.

Work starts with the goal posts coming down and the track being ripped up at Prescott High School's Bill Shepard Field on May 30, 2019. (Les Stukenberg/Courier) 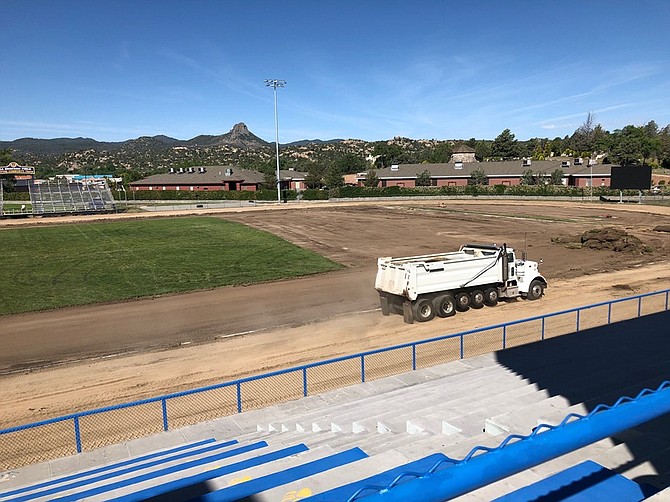 A dump truck circles Bill Shepard Field on the campus of Prescott High School on Thursday, June 6, 2019, as half the field has already been taken out. The $2.5 million turf field, track and LED stadium lighting system is estimated to take a minimum of 90 days. (PHS/Courtesy)

But, Townsend said, the district is paying for the lights and the artificial turf field using its recent building sales, leaving only the track to be paid for using the recent bond money.

“We’re really proud of that. The district is being very fiscally responsible in using as much of the money from the building sales to pay for this,” Townsend said.

PUSD Superintendent Joe Howard said everyone is “very excited about this project.”

“[We] look forward to working with the City [of Prescott] on the Ken Lindley possibilities. We plan to enjoy the retro aspect of how PHS used to roll back in the day,” Howard said in an email.

Townsend expressed no concerns about playing football at Ken Lindley Field and said the City of Prescott, along with the grounds crew for Yavapai College, has already walked the field and have laid out a plan. 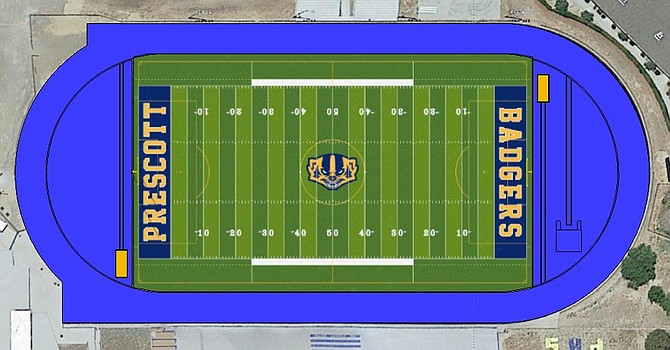 An artists rendition of what Bill Shepard Field could look like from an overhead view once the project is complete. (PHS/Courtesy)

“The City of Prescott values its relationship with PUSD. Historically, we have shared facilities to the benefit of the taxpayers. It will be great to see some high school football in downtown Prescott,” City of Prescott Recreation Services Director Joe Baynes said in an email.

A big part of that plan is covering the softball field in the southeast corner with sod, which the City of Prescott will complete.

Townsend added that she plans to purchase either one or two portable goalposts for field goals during games. The AIA allows teams to have just one goalpost for unique situations, however, which fans could see this fall for the Badgers.

As of now, no bleachers are scheduled to be moved onto the field, and only one sideline, the Washington Ave. side, will be used for both teams.

Brad Clifford, athletic director at Yavapai College, estimates Ken Lindley Field can hold around 2,000 fans, if not more, with the main rock seating on the east side of the field that stretches the entire length of the park, and the several rows of seating on the south side. Not to mention the old band stands on the southwest corner.

“We all talked and there was no hesitation at all [from us]. Let’s get football back to Ken Lindley,” Clifford said.

Townsend said they will not look to reschedule any games due to the club being in the second year of a two-year block scheduling system via the AIA.

Both the Badgers and their opponents will dress at PHS, then be bussed over prior to kickoff. Teams will have an option to stay on the field for halftime, or jump on the bus and meet.

“We’re pretty lucky with the small town atmosphere that we get at our games,” Townsend said. “I really truly want to make this a community event, where the community feels a real buy in to the school and the team.”

• 2 portable field goal posts are scheduled to be purchased by the Prescott athletic department, although only one may be bought since AIA bylaws dictate a team can have only one on the field if necessary

• An estimated 2,000 fans can fit in the stands at Ken Lindley Field

• All practices will still take place on PHS campus, but Thursday walkthroughs will be at Ken Lindley Field

• Both teams will dress in PHS locker rooms, then be bussed over prior to kickoff

• Both teams will use the west side of the field for a sideline (Washington Ave.)

• Scorekeepers, coaches and the media will use the press box in the southeast corner of Ken Lindley Field

• Teams are welcome to stay on the field at halftime, or retreat to their bus for meetings