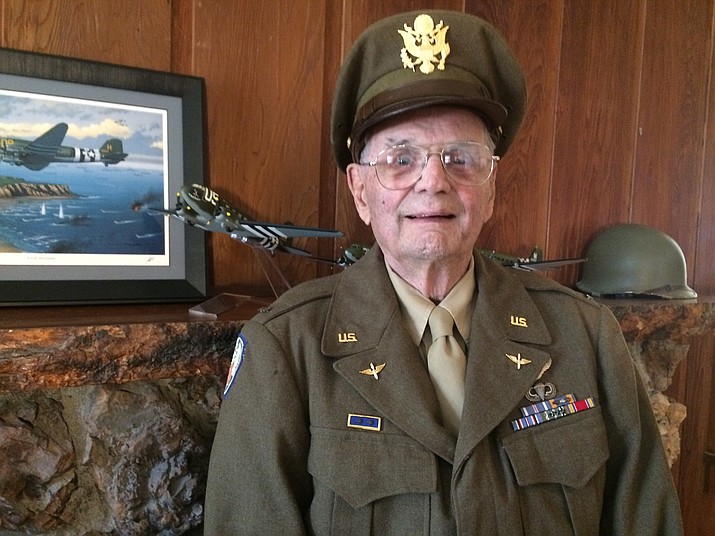 Dressed in a World War II period pilot jumpsuit with Eisenhower jacket, adorned with his various medals and citations, Dave Hamilton stands in front of models of planes he piloted as part of the elite Pathfinders. Hamilton piloted the first paratrooper flight into France from an air base in North Witham, England, dropping 18 paratroopers behind Omaha Beach west of Saint-Mere-Eglise amid German ground fire.

The Prescott descendant of founding father Alexander Hamilton is the last surviving Pathfinder pilot charged with ferrying paratroopers into enemy territory hours before the D-Day landing at Omaha Beach in Normandy.

Just before midnight, June 5, 1944, the then 21-year-old pilot departed the United States Army Air Forces base in North Witham, England. He and his four-member crew, and an observer, dropped 18 Allied paratroopers at a designated landing spot behind Omaha Beach west of Sainte-Mère-Église. It was the first flight into the Normandy war zone, the elite group part of the first combat operations of the invasion.

On this 75th anniversary Hamilton is again in Normandy, this time as an honored guest treated to a D-Day Squadron flight across the English Channel. For the anniversary, the Commemorative Air Force arranged for Hamilton to be a passenger aboard a restored C-47 similar to the one he flew on the never-to-be-forgotten day.

Visiting with Hamilton a week ago Sunday, the military-turned-commercial pilot and successful entrepreneur reflected with near-perfect recall on the perilous mission he managed to complete without tragedy.

With the plane at 800 feet above ground, traveling at 200 miles an hour, the flight and jump required careful precision. The Germans peppered the aircraft with more than 200 rounds of ground fire, one bullet striking the windshield and damaging controls Hamilton needed to turn off the engines. A large, anti-aircraft shell ripped off one of the plane’s wing tips.

Yet none of the bullets that hit the fuselage disabled the plane or hit any of the crew or paratroopers. One did shoot out a light just above Hamilton’s seat, and the lack of engine control required he dump gasoline so as to slow the plane on landing, he noted. 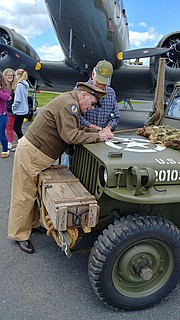 With speed and stealth paramount to success, Hamilton executed some quick maneuvers to escape the drop zone, narrowly missing a cathedral steeple.

Other than dodging enemy bullets, dark skies filling with planes, and instruments that weren’t functioning at maximum efficiency, Hamilton shared his well-honed humor as he mentioned one other snag: “The paratroopers' feet got wet.”

“We were anxious,” Hamilton admitted of the mission for which he was extensively trained but still had no way to comprehend. “There was no time to be scared. We were doing our job.

“But I felt if we lived through it, it would be the biggest adventure of my life.”

He still counts it as such.

Upon completing the mission, Hamilton and his crew celebrated with a shot of Dewar’s White Label Blended Scotch whisky. They drank it at the “Ram Jam” pub he hoped to visit as a guest in North Witham this week.

Thinking back on his role seven decades ago, Hamilton is humble and proud.

Because he is in a special class of World War II veterans still able to articulate about that day, and the surrounding days and months of untold sacrifice to quell Germany and Japan’s quest for world dominance, Hamilton is surprised to find he is now such a heralded veteran.

Hamilton enlisted the day after the Pearl Harbor attack on Dec. 7, 1941, and retired as a lieutenant colonel after the Cuban Missile Crisis in 1963.

In the past couple months, Hamilton has been interviewed and photographed by a bevy of media from across the nation and Europe; he was featured in a webcast and as the subject of a film documentary.

His Prescott lawyer, accountant, and media manager Kay Nehring teases that Hamilton is the “World War II version of Elvis.”

After D-Day, the highly-decorated officer was part of several other key European missions. Those were followed by combat missions in Korea and military intelligence efforts during the Cuban Missile Crisis. Hamilton was honored with multiple medals including The Distinguished Flying Cross, America’s oldest military aviation medal for heroism.

Hamilton’s father, Pierpont, was a highly decorated, World War I pilot who was awarded the Congressional Medal of Honor for his heroic deeds.

On a recent trip to Connecticut as part of the 75th D-Day anniversary reflections, Hamilton was approached by a “darling” little girl who called him a “hero.”

He quickly dispelled that notion.

“I’m not a hero,” Hamilton explained. “The heroes are the ones who have white crosses and Stars of David above their graves (in the Normandy American Cemetery).

“I’m a surviving veteran who is doing all I can to make sure veterans are properly taken care of,” said Hamilton, noting he counts it a privilege to be an ambassador for his living and fallen comrades. “I feel it’s my social responsibility.”