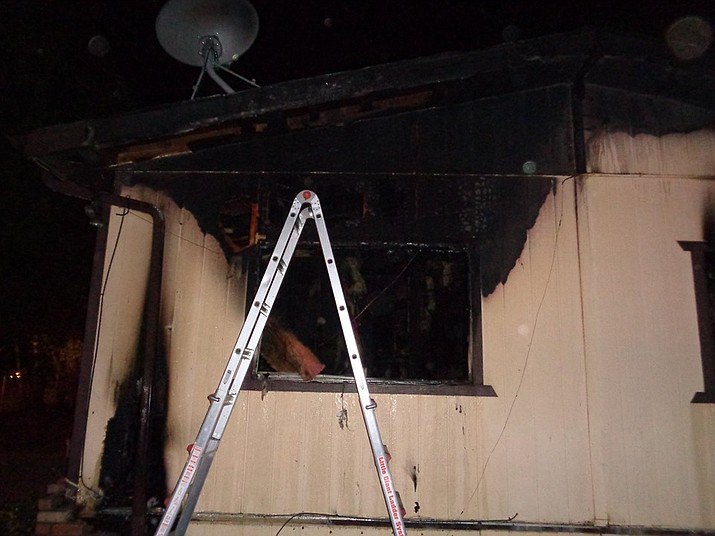 A house on Judy Ave. in Chino Valley is considered a total loss after a fire Wednesday morning, June 5. Three cats died in the blaze. (Central Arizona Fire and Medical Authority/Courtesy)

A Chino Valley home is considered a total loss and three cats are dead after a structure fire early Wednesday morning, June 5.

Firefighter crews responded to the house fire on Judy Avenue at about 1 a.m. There was one occupant home who safely evacuated and an aggressive fire attack was able to contain the fire quickly, Central Arizona Fire and Medical Authority (CAFMA) Fire Marshall Rick Chase said.

“Unfortunately, three cats perished in the fire,” Chase said. “They were found a little bit after the fire was out. They didn’t get out of the bedroom area.”

Following an investigation, Chase determined that the fire was caused by the homeowner using a propane torch to burn weeds around his property the day before.

“He was burning some weeds that were next to the home and the fire got behind the Masonite siding on his home and must have been smoldering until it finally reached an ignition point at about 1 o’clock in the morning,” Chase said.

The homeowner told Chase that he smelled the smoke while he was sleeping, so he got up, got out and called 911. Unable to reenter his home, the Arizona Crisis Team connected the homeowner to Red Cross, which provided him with a temporary place to stay, Chase said.

“This is the third house fire over the last few years that we’ve seen get started from people who are using a propane torch, so what I try to share is that even though they’re sold, per fire code they’re not legal to use to burn weeds on your property,” Chase said.

If residents do wish to burn weeds on their property, it’s recommended they contact the fire district in their area and obtain a burn permit, Chase said. The permit explains how to conduct the burning safely.