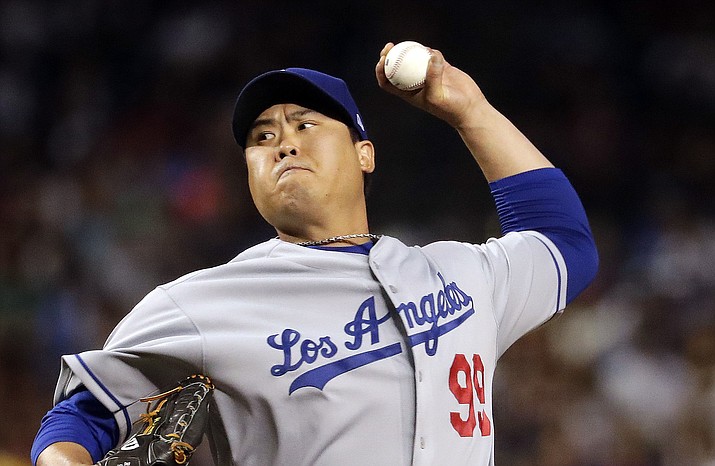 PHOENIX — Hyun-Jin Ryu allowed three hits in seven scoreless innings, Cody Bellinger hit a two-run triple after a rare day off and the Los Angeles Dodgers stretched their winning streak to seven games with a 9-0 rout over the Arizona Diamondbacks on Tuesday night.

Ryu (9-1) needed 25 pitches to get through the first inning thanks to shaky defense behind him, but dominated after that to win his seventh straight start. The right-hander overcame another error in the seventh with an inning-ending double play to complete his fifth scoreless outing in six starts.

Bellinger had a two-run triple in his first at-bat against Taylor Clarke (1-2) following his first day off since May 3. He went 1 for 4, dropping his big league-best average to .374.

Enrique Hernandez homered and had two RBIs for the NL West-leading Dodgers, who have won 11 of 12. Corey Seager hit a pair of run-scoring doubles and David Freese a two-run double.

The Diamondbacks were held to three hits in their seventh loss in nine games.

The right-hander had to work out of a jam in the first inning against the Diamondbacks after the Dodgers committed two errors behind him.

Once Ryu got Christian Walker on a comebacker to end the first, he had Arizona’s hitters pounding balls into the ground the rest of the night.

The rookie right-hander was in trouble from the start in his first career appearance at Chase Field.

Pitching coach Mike Butcher made a mound visit after 13 pitches and two baserunners, then Bellinger ripped a ball off the wall in center for a two-run triple.

Unlike the previous start, Clarke righted himself, holding the Dodgers to two more hits over the next four innings. He allowed three runs — two earned — and struck out four in five innings.

Diamondbacks: LF Adam Jones came out in the fourth inning after trying to run out a ground ball in the third. The Diamondbacks said he had right hamstring tightness and is day to day.