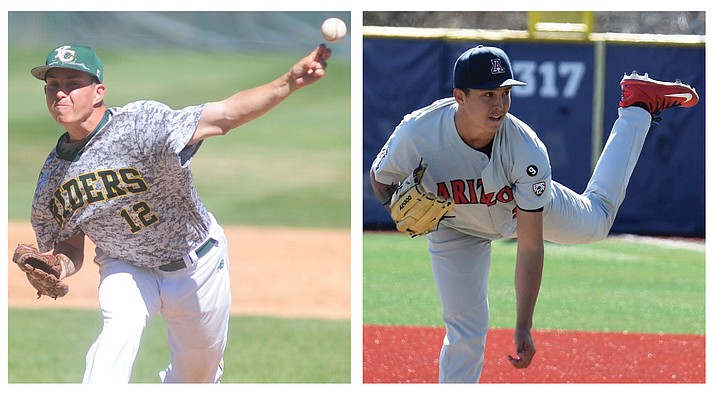 Former Yavapai College and University of Arizona pitcher Avery Weems was drafted by the Chicago White Sox in the sixth round with the 170th overall pick of the 2019 MLB Draft on Tuesday, June 4, 2019. (Les Stukenberg/Courier, file/Arizona Athletics, file)

TUCSON — Two years removed from pitching for Yavapai College, lefty Avery Weems was selected in the sixth round by the Chicago White Sox with the 170th overall pick on day two of the 2019 MLB Draft on Tuesday afternoon.

Weems, who played the last two seasons for the University of Arizona, is the fourth Wildcat to be selected so far in this year’s draft.

“The draft process for the past four years has been pretty long for me,” Weems told the Courier in a phone interview Tuesday afternoon. “Even though it didn’t happen soon, I’ve grown so much as a player in college. With my time at Yavapai College and Arizona, it’s taught me a lot. It feels surreal, a lifelong dream.”

The former Coconino graduate credited his coaches in high school and all the others along the way in helping him realize that lifelong dream.

“I wouldn’t be on this road to start with if it wasn’t for [my high school coaches]. They gave me the exposure I needed, which got me to Yavapai, which allowed me to get to Arizona,” Weems said. “I have a lot of people to thank.”

Weems is expected to be in Phoenix this coming weekend for a physical at the White Sox spring training facility at Camelback Ranch in Glendale where he’ll sign his contract and attend a minicamp. Per MLB Draft rules, Weems is slated to make a hefty $296,400 signing bonus for being drafted in the 170th slot.

From there Weems said he’ll likely get sent to Great Falls, Montana, where he’ll play advanced rookie ball for the Great Falls Voyagers of the Pioneer League.

The former Roughrider pitched two seasons in Prescott, throwing 57-2/3 innings and posting a 4-1 record with a 3.90 ERA and 61 strikeouts during his freshman campaign in 2016, helping Yavapai claim the fourth national title in program history.

In 2018, the Flagstaff native led the Wildcats with 26 total appearances, making nine starts, and finished third on the team with 55-1/3 innings pitched. He was 2-3 with one save while striking out 39 batters during his junior campaign.