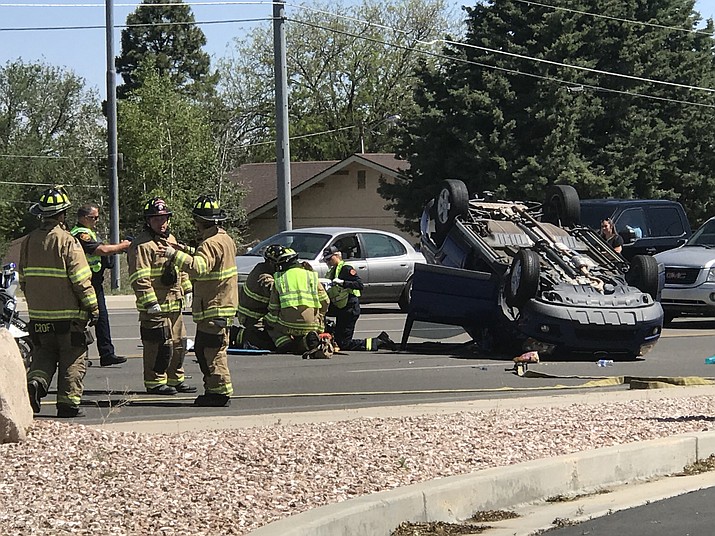 A Prescott woman was injured and northbound Willow Creek Road was temporarily closed after a two-vehicle rollover collision at the intersection of Willow Creek Road and Smoke Tree Lane Tuesday morning, June 4.

Emergency responders arrived on scene shortly before 10 a.m. to find a blue Kia Sportage upside-down in the road with a 23-year-old Prescott woman suspended from her seatbelt inside, Prescott Fire Department Paramedic Conrad Jackson said.

“She was conscious, but complaining of injuries,” Jackson said. 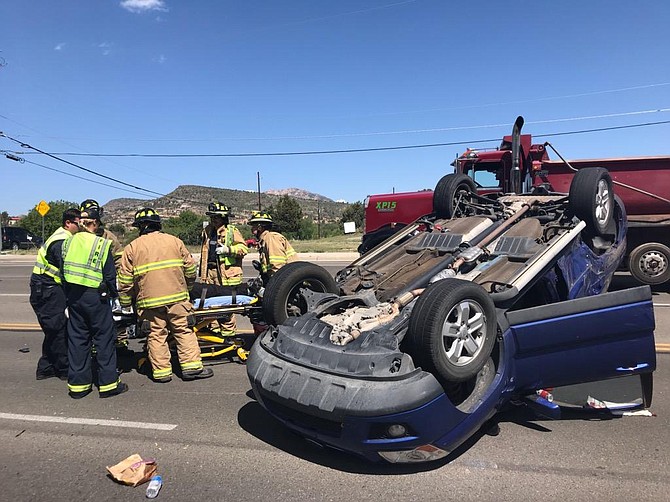 The woman was removed from the vehicle without need of extrication tools and transported to Yavapai Regional Medical Center for further evaluation of non-life threatening injuries, Jackson said. The occupants of the second vehicle were evaluated but refused further medical treatment.

The investigation determined the Kia Sportage was travelling northbound on Willow Creek Road when the driver failed to stop for a red light at the intersection of Smoke Tree Lane, PPD reported.

As the Kia attempted to drive through the intersection, it struck the driver side front fender area of a 2005 Jeep Liberty, which was attempted to turn north onto Willow Creek Rd from Smoke Tree Lane, PPD reported.

The force of the impact caused the Kia Sportage to spin and eventually roll onto the roof of the vehicle, PPD reported.

“All involved were wearing seatbelts, which no doubt contributed to only minor injuries being reported,” PPD spokesperson Corey Kasun said.

The driver of the Kia was issued a citation for failing to stop for a red light.

Northbound Willow Creek Road was reopened at about 11 a.m.