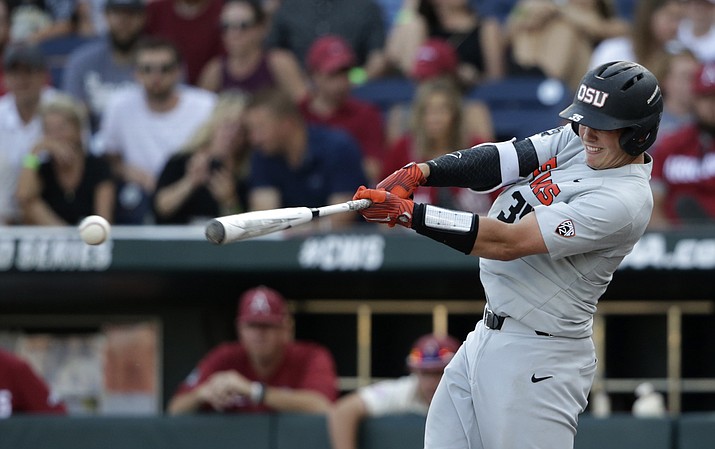 In this June 28, 2018, photo, Oregon State’s Adley Rutschman hits an RBI single to score Cadyn Grenier during the third inning of Game 3 against Arkansas in the NCAA College World Series finals, in Omaha, Neb. The Baltimore Orioles led off the Major League Baseball Draft for the first time in 30 years and Oregon State catcher Adley Rutschman was a heavy favorite to be selected No. 1 on Monday night, June 3, 2019. (Nati Harnik/AP, File)

The announcement at MLB Network studios marked the second time the Orioles led off the draft — they took LSU pitcher Ben McDonald in 1989.

“It’s everything I’ve always dreamed of,” Rutschman said in an interview on MLB Network. “This is an unbelievable feeling and I couldn’t have asked for anything more.”

The younger Witt has draft-day bragging rights on his father, who won 142 games over 16 seasons after being selected No. 3 overall in 1985.

“The dreams are kind of turning into reality,” the younger Witt said.

The 21-year-old Rutschman had been the favorite to go first overall since he led Oregon State to the College World Series championship last year and was selected the most outstanding player. He followed that up with a dominant junior season at the plate — and behind it.

Rutschman, a native of Sherwood, Oregon, is a finalist for the Golden Spikes Award given to the country’s top college player. He was also the Pac-12 player of the year for the Beavers and the conference’s co-defensive player of year.

His selection marks the seventh time a player drafted as a catcher was taken with the top pick, and first since Minnesota tabbed Joe Mauer in 2001.

Vaughn batted .381 this season with 15 homers, 50 RBIs and a .544 on-base percentage that ranks among the national leaders. He also showed a terrific eye at the plate and struck out just 74 times in three college seasons.

The 6-foot, 214-pound Vaughn is also looking to become the first repeat winner of the Golden Spikes Award after earning the honor as a sophomore last year.

The Miami Marlins drafted Vanderbilt outfielder JJ Bleday at No. 4, adding the Southeastern Conference player of the year who has a quick, left-handed swing and leads Division I players in home runs with a school-record 26. A finalist for the Golden Spikes Award, the 6-foot-3, 205-pound Bleday is hitting .351 and brings a 42-game on-base streak into next weekend’s super regionals round of the NCAA Tournament.

More draft history was made when the San Diego Padres selected speedy Georgia high school shortstop CJ Abrams at No. 6, marking the first time no pitchers were taken within the first six picks.

The lefty-hitting Abrams was considered by many to be the fastest player in the draft. The Blessed Trinity Catholic High School star batted .418 with eight home runs and 100 RBIs in his high school career.

Generally regarded as the top pitching prospect in this year’s class, Lodolo went 6-6 with a 2.36 ERA and struck out 131 while walking just 25 in 103 innings for the Horned Frogs. He was the 41st overall pick by the Pittsburgh Pirates in 2016 — the highest selection to go unsigned that year.