Editorial: It’s time for baseball to do more in protecting their fans 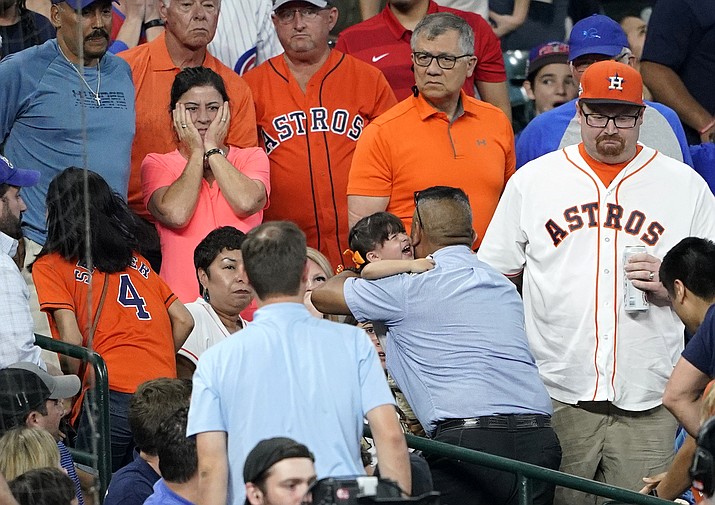 A young child is carried from the stands after being injured by a foul ball off the bat of Chicago Cubs' Albert Almora Jr. during the fourth inning against the Houston Astros on May 29, 2019, in Houston. (David J. Phillip/AP, file)

One of the great things about attending a Major League Baseball game is the closeness fans feel to the players.

The bigger-than-life human beings wearing a team’s home colors are just a few feet away. It feels like they are within reach, whether they are on the field during a game, in the dugout or signing autographs for a group of fans after batting practice.

Fans and players have conversations at a ballpark like they’re sitting at the Sunday dinner table with family.

No other sport has this type of fan-player relationship, and most wouldn’t trade it for anything.

But sometimes, like last week’s image in Houston of a little girl wearing an orange bow in her hair being whisked off after getting struck by a foul ball, fans, clubs and local communities begin to wonder if the opportunity to be closer than anyone else is really worth it.

On May 30, Chicago Cubs center fielder Albert Almora Jr. fouled off a fourth-inning fastball, but unlike most pitches he’s hit, this one struck a little girl in the stands.

The man, who appeared to be with the little girl, immediately dashed up the stairs with the child in his arms at Minute Maid Park in Houston.

The game was delayed several minutes as Almora was visibly upset and had to be consoled by the club’s coaching staff and his teammates. At one point, between innings Almora went over to the stands to check on the girl and was seen hugging a security guard crying uncontrollably. 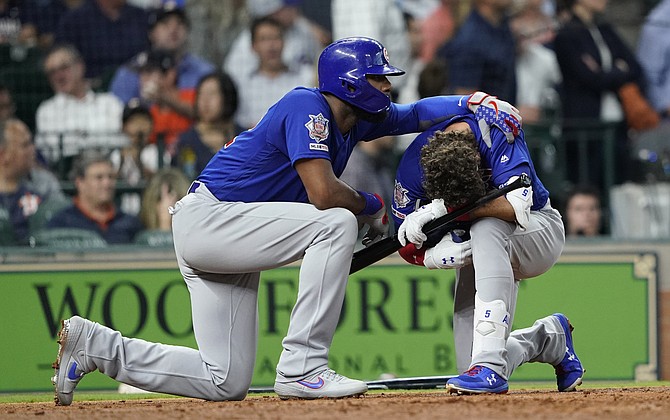 Chicago Cubs' Albert Almora Jr., right, is comforted by Jason Heyward after hitting a foul ball into the stands during the fourth inning against the Houston Astros on May 29, 2019, in Houston. (David J. Phillip/AP, file)

The Astros released a statement that night saying the girl was taken to the hospital, but no further information on her condition was available as of Monday.

This is just one instance in the hundreds of stories of fans being hit by flying objects at a baseball game.

Foul balls come screaming into the stands at 100-plus mph. Flying bats unintentionally released by the hands of a batter have reached the stands. Even a broken bat acting like a jagged spear being hurled into stands has injured fans.

Although every pillar at every entrance to its seating, stadiums across the country post, “Beware of Flying Objects,” it’s not enough.

In 2018, MLB decided to require all clubs to extend the protective netting fans sit behind to the end of the dugout.

“Providing baseball fans with a variety of seating options when they come to the ballpark, including seats behind protective netting, is important,” MLB Commissioner Rob Manfred said in a statement.

The extended netting came after another little girl in New York was struck by a 105-mph foul ball in her head, and was taken to the hospital but was OK.

But is extending the netting enough? Likely not.

In February, the Los Angeles Dodgers revealed 79-year-old Linda Goldbloom died days after being struck by a foul ball at Dodger Stadium in August 2018. Why did the club wait five months to release this information? Nobody knows.

The woman was the third death as a result of being hit by balls that left the field of play in MLB history, according to ESPN.com.

And as for that little girl in Houston last week? She was sitting in the fourth row about 10 feet beyond the protective netting. After the game, Cubs first baseman Kris Bryant reiterated his call for MLB to extend protective netting around the field of play to better protect fans.

“There’s a lot of kids coming to the games – young kids who want to watch us play – and the balls come in hard,” Bryant told ESPN’s Jeff Passan, adding later, “I think any safety measure we can take to, you know, make sure that the fans are safe, we should do it.”

So if players are for it, what’s stopping clubs from extending the protective netting all around the ballpark? Are the fans against it? That has yet to be seen.

The Courier editorial board implores all MLB teams, starting with the Arizona Diamondbacks, to do all they can to protect the fans, because without the fans, there wouldn’t be baseball.

Kobritz: Extended netting is coming to a ballpark near you
MLB pushes expanded ballpark netting
Child hit by line drive at Astros game, taken to hospital
Column: Does baseball have a safety issue?
Kobritz Column: Is MLB fan safety goal No. 1?