Crisis intervention training pays off in attempted suicides Sunday, June 2
One arrested in Humboldt for threatening police, attempting to break out of patrol vehicle 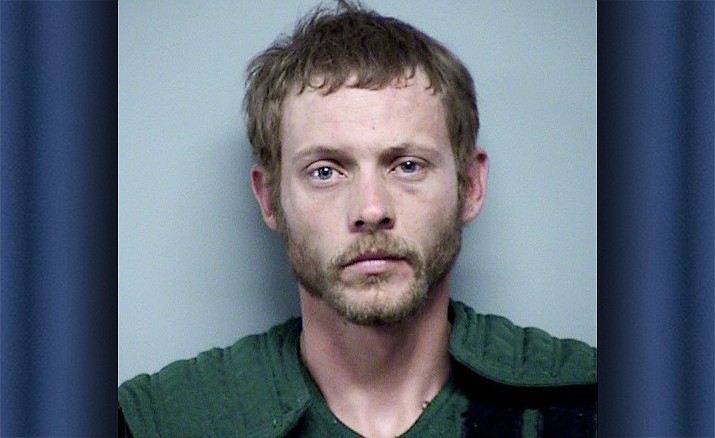 Ryan Howard, 31, was arrested for threatening police and resisting arrest after threatening to kill himself at his Humboldt home Monday, June 3. (Yavapai County Sheriff’s Office/Courtesy)

Relying on crisis intervention training, deputies with the Yavapai County Sheriff’s Office (YCSO) were able to de-escalate two different suicide attempts on Sunday, June 2, so that no one was harmed during either incident, YCSO reported.

The first occurred in the mid-afternoon at a Rimrock home in the 4000 block of Lakeshore Drive.

Around 3:30 p.m., deputies were told an 18-year-old man was threatening to kill himself with a handgun. A younger sibling reported the situation, telling authorities that his brother was inside a shed in the backyard with the gun.

A trained deputy negotiator arrived and started a conversation with the suicidal man. The deputy saw the 18-year-old “raise the handgun several times into view and point it at his head,” YCSO spokesperson Dwight D’Evelyn said. “At one point, the subject wanted deputies to shoot him.”

As the man became more aggressive, a supervisor and trained negotiator from the YCSO SWAT team arrived and continued speaking with him. Eventually, the man agreed to toss the handgun outside and away from the shed. The negotiator was able to close some distance under cover and convince the subject to surrender around 5:15 p.m., YCSO reported. The man was eventually released to mental health personnel for follow-up.

Four hours after the Rimrock incident, YCSO deputies found themselves handling another suicide attempt in Humboldt.

A 31-year-old man had threatened suicide via a crisis hotline, so deputies responded to his home in the 13000 block of East McCabe Street around 9:30 p.m. Sunday, June 2.

When contacted by a deputy over the phone, the man threatened to shoot any deputies that tried to interfere, YCSO reported. The man added that his mom was with him at the house and that he had cut his wrists.

While maintaining phone contact with the man, deputies set up a safety zone around the home. Attempts to reach the man’s mother by phone were unsuccessful, YCSO reported.

Deputies eventually confirmed the man was in the house, but could not reach a surrender agreement over the phone and did not know the condition of the man’s mother, so they decided to use loudspeakers to gain the attention of anyone inside the home, YCSO reported.

After several minutes, the man’s mother came to the front door and then went back inside. A few minutes later, the man then exited the home and was taken into custody around 1 a.m. Monday morning, June 3.

His mom then exited the home unharmed, YCSO reported.

“The man had a superficial cut on his wrist, but was otherwise unharmed,” D’Evelyn said.

Concerned the man may still harm himself or others, police detained him in the back of a YCSO vehicle, D’Evelyn said. While seated in the vehicle, he slipped out of handcuffs and began kicking the passenger door, causing it to bow, YCSO reported. Deputies removed him from the vehicle, but he continued to fight until restrained. They then transported him to the Yavapai County jail in Camp Verde.

“Unfortunately, due to his combative behavior, the mental health team who was on standby could not assist with an evaluation,” D’Evelyn said.

The man, Ryan Howard, was booked on charges including assault on a peace officer, resisting arrest and vandalism. He remains in-custody on a $5,000 bond.

D’Evelyn said both of these incidents highlight the importance of crisis intervention training for Yavapai County law enforcement personnel, which area agencies began doing in early 2017.

“The techniques and topics discussed in the training and shared amongst patrol personnel, are a critical component in the successful outcome of these incidents and others similar that were experienced by deputies in the recent past,” D’Evelyn said.