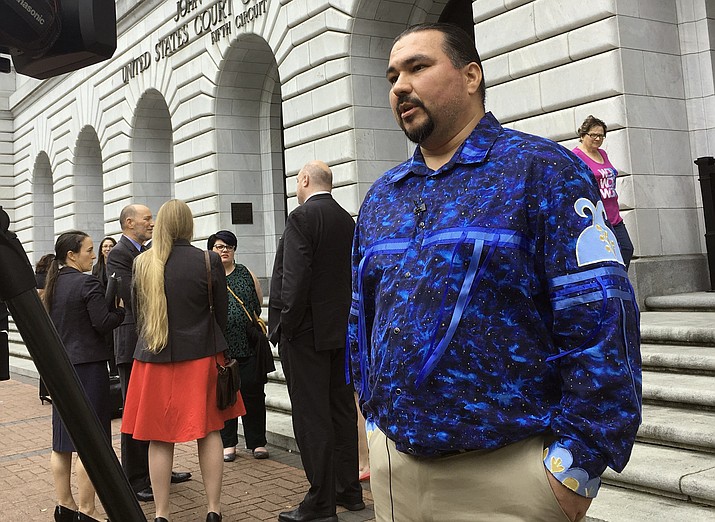 PHOENIX — The U.S. Supreme Court has rebuffed a bid to void a federal law that challengers claim is racist because it places the desires and rights of Native American tribes over the constitutionally protected best interests of children.

That, however, does not mean the justices believe the Indian Child Welfare Act is legal. Instead, they refused to disturb a lower court ruling which said that this particular case was moot because the Arizona adoptions at issue had gone through.

Attorney Timothy Sandefur of the Goldwater Institute said his organizations remains convinced that the law is illegal because it makes race a consideration when state courts look at adoptions. But he told Capitol Media Services the refusal of the high court to use this case to decide that issue leaves the fight over the law for another day -- and another case.

But a coalition of Native American organizations declared the decision by the court not to rule on the challenge, one way or the other, a victory.

"To us, the U.S. Supreme Court deciding not to review the case tells us that they looked at the Goldwater Institute and their filing and they said that the federal district court got it right: There wasn't any harms to these kids,'' said David Simmons, the government affairs and advocacy director of the National Indian Child Welfare Association, one of the coalition members. Put simply, he said, the court recognized the fact that the children were adopted by non-Native parents, even with ICWA in place, shows the law works.

The federal law at issue was enacted in 1978 amid concerns that state courts were severing parental rights and approving adoptions of Native American children who did not live on reservations. The congressional record shows that Congress was concerned that these children were being increasingly adopted by non-Indian families.

That law, which applies only to Indian children who do not live on reservations, requires state courts when placing children for adoption to give preference to a member of the child's extended family. That is followed by priority by other members of the child's tribe and, ultimately, other Indian families.

There also are provisions that Sandefur say require active efforts to reunite a Native American child with a family, something he said "requires these children to be sent back to the parents that have abused them.''

According to the Goldwater Institute, all that is racist because it overrules state laws which require courts to give prime consideration to the "best interests of the child,'' regardless of whether that means placement with a tribal member or someone else.

"So it has nothing to do with whether your race is Native American or anything like that,'' he said.

"It's not based on blood quantum,'' Simmons continued. "It's based on who tribal nations, which are considered sovereign nations, nations within a nation in the United States, who they consider to be their citizens.''

That right, he said, was earned by tribes giving up hundreds of millions of acres for protection from the federal government.

Simmons said there was a good reason for Congress to create ICWA.

"The typical practices prior to ICWA is that large numbers of Native children were being removed, often unnecessarily,'' Simmons said. "So Congress stepped in to make sure there was a remedy for those abusive and biased practices because otherwise we would have even higher numbers of Native children unnecessarily removed and separated from their families and their communities.''

This particular lawsuit was filed by against the U.S. Bureau of Indian Affairs in 2015 by the Goldwater Institute on behalf of two children with some Native American blood who, at the time, were at least temporarily placed with non-Indian families where they have lived since they were infants.

It charged that the Indian Child Welfare Act gives tribes pretty much unfettered authority to decide placement of children with some native blood, "even those who have never set foot on a reservation.''

The claim most immediately sought to protect two children from being taken from their current homes. Other children were subsequently added to the claim.

Meanwhile, the Navajo Nation and the Gila River Indian Community interceded on behalf of the federal government to defend the law.

In an extensive ruling two years ago, U.S. District Court Judge Neil Wake said attorneys for the Goldwater Institute had not proven that any of the children they were claiming to represent actuially had been harmed because of the requirements of the Indian Child Welfare Act. And Wake said if there is a child who may be in danger, that claim can be handled by the state courts that are handling that adoption or foster care proceeding.

That sent the case to the 9th Circuit Court of Appeals. But the judges there decided to sidestep the question, declaring the whole case "moot'' because the children at issue already had been adopted.

Sandefur conceded the point. But in a bid to keep the case alive, he argued to the U.S. Supreme Court that the couples involved had suffered economic harm, entitling them to pursue their challenge.