Nature vs. nurture: Who’s to blame for dog attacks?
Discussion comes as number of incidents seems to be on the rise 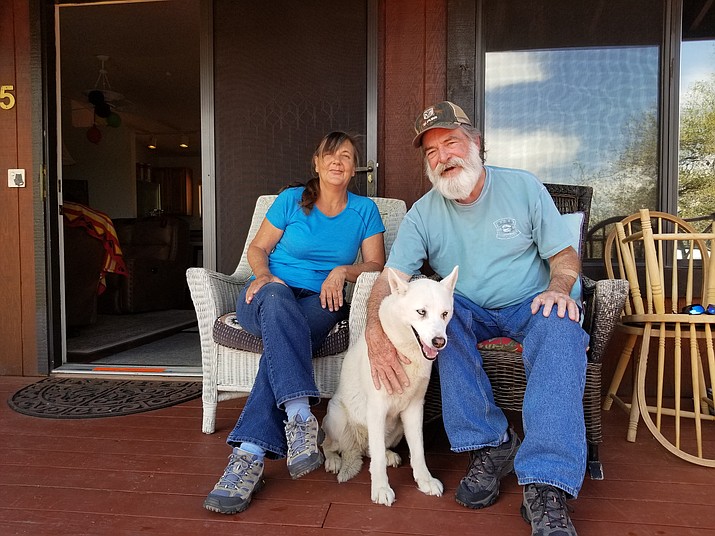 David Dick, Ramona Reynolds and their Husky, Sadie, were attacked by a pit bull in their Prescott neighborhood on Dec. 17, 2018. (Max Efrein/Courier)

David Dick and Ramona Reynolds can barely speak about their battle with a pit bull in December 2018 without getting highly emotional.

“It was very distressing,” Dick said.

As the couple had done almost every day for the previous three years, they were taking a walk through the Mountain Club, a Prescott community they were living in at the time.

With them were their 2-year-old grandnephew and 9-year-old, leashed husky, Sadie. As they were passing one of the many homes in the subdivision, a resident was walking out to get his mail. The man had two pit bulls waiting inside his home, and as soon as the dogs saw Sadie, they managed to push through a door and dash toward them, Dick said.

“Oh my God, it happened in like two seconds time,” he said. “You don’t have time to do anything at all to protect yourself; you can’t get away. All I had the chance to do was to snatch the toddler off the ground.”

The owner of the pit bulls tackled one of the dogs, but the other got through and piled right into Reynolds and Sadie.

“We were under full attack,” Reynolds said.

Reynolds tried to protect Sadie from the assault and ended up getting bitten on the knee. Meanwhile, Sadie was keenly taking evasive maneuvers.

“[Sadie] did an amazing job of keeping from getting injured,” Dick said.

After a great deal of yelling and tussling, the pit bull owner’s wife managed to get ahold of the attacking dog and drag it back to their house, Dick said.

Animal Control officers with the Yavapai County Sheriff’s Office were called out and a report was filed. As is required after a dog bites someone, the dog that bit Reynolds was quarantined for 10 days so its behavior could be monitored in case it had rabies, which they determined it did not.

Now five months later, Dick and Reynolds are still locked in a court case that will determine if the owner of the pit bulls will receive any fines or charges for the way his dogs behaved. This is the second time the pit bull owner has been brought to court for his dogs attacking another dog. In the first case, which was just resolved on May 20, 2019, a judge found him guilty of two counts of dog at large, which is a low-level misdemeanor.

No matter the outcome of this second case, Dick and Reynolds said they will never feel the same way about taking casual walks in their neighborhood.

“We haven’t been for a walk since it happened,” Reynolds said. “That whole feeling of walking in your neighborhood is so totally different now.”

“To me, the level of aggression that we’ve seen in the last year or two has escalated somewhat because we have more people with more dogs,” Dean said.

Chino Valley Police Department saw a similar spread of variety in their 18 dog bite reports between June 1, 2018, and May 10, 2019: five pit bull, three Chihuahua, two Saint Bernard, one Queensland heeler, one Labrador Retriever, one Weimaraner, one Beagle, one Belgian Malinois, one Red Heeler and two unknown.

Information from the Prescott Valley Police Department on the number of dog bite reports it has received in the past year and the breeds responsible for each attack could not be obtained before press time.

Certain breeds of dogs are perceived as more being prone to aggression than others. Often cited are Rottweilers, Dobermans, German Shepherds and pit bulls — which is a common name for a type of dog descended from bulldogs and terriers rather a breed in itself.

Dean said these types of dogs do have what is called a “high prey drive,” a term which refers to a dog’s eagerness or desire to work hard, especially if the work involves anything related to chasing and capturing prey.

However, she and other animal experts do not believe specific breeds of dogs are necessarily more vicious by nature than others.

Some factors that can play into a dog’s behavior are its living conditions, the way it is cared for in general and its mental health.

Longtime local dog trainer Heidi Dahms Foster said the largest influence on a dog’s behavior, in her opinion, is training.

“Any dog can be an issue if not properly trained and socialized,” Foster said.

Given this, she believes dog owners are really to blame if a dog is acting out in a negative way.

“I would lean way more toward it’s the people [than the breed],” she said.