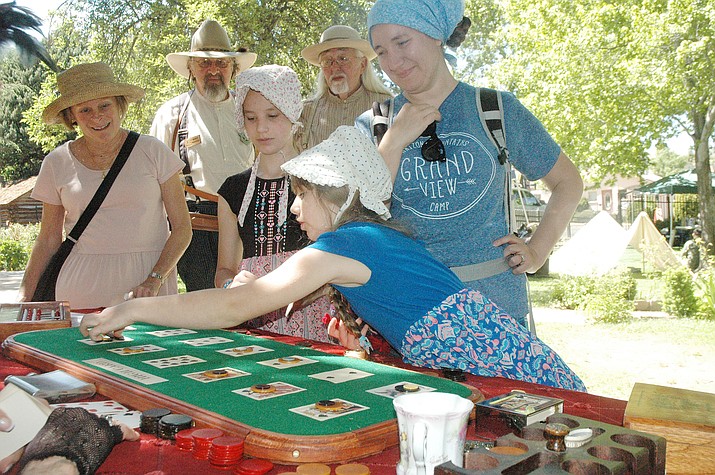 After a little game of Faro, Delilia and Aurellia Klein moved on to check out some weaving at the Sharlot Hall Museum’s 46th annual Folk Arts Fair on Saturday, June 1.

They really enjoy the museum, and if they can’t make it there during the rest of the year, they always make sure to attend the Folk Arts Fair so they can have fun, said their mother, Liana Klein. The family has attended for several years, she said.

“It really kicks off our summer,” she said. “I make sure we hit it every year.”

Teaching them Faro earlier was Della Dixon who said the game has some local history. Not only did Buckey O’Neill get his nickname from playing the game, but Virgil Earp and Doc Holliday dealt it on Whiskey Row, Dixon said.

With more equipment and more complicated rules, Faro is a little-known game these days, she said, noting that movies have taken it out of the public conscious by replacing it with poker.

“Faro was around much earlier than poker,” she said. 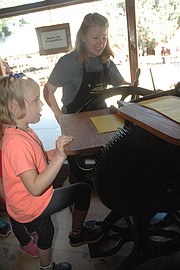 Eleanor Crosby works one of the printing machines, with some help by Jeryl Jones in the Sharlot Hall Museum print shop at the museum’s 46th annual Folk Arts Fair Saturday, June 1. (Jason Wheeler/Courier)

On the other side of Sharlot Hall’s campus were vintage baseball players showing how far baseball has come since its early days.

Bill Helm, a member of the Fort Verde Excelsiors, a vintage baseball team, said that in the early days of the game players caught the ball with ungloved hands. The balls were softer than they are today, mostly because they were made by hand, Helm said.

“Machines were busy doing other more important things than making balls for us to chase around,” he said. “You wanted a ball, you made it yourself. You can’t do that nearly as tight as a machine.”

Since pitches were thrown underhand, the balls weren’t traveling very fast, and the job of a pitcher was to get the motion going rather than to deceive the batter, Helm said.

Once the professional game developed, players began to see how far they could push the rules, and eventually it turned into overhand pitches with hardballs, but it was a gradual evolution, Helm said.

The original Fort Verde Excelsiors were comprised of soldiers stationed at the fort, he said. The current team picked up the name as re-enactors about 15 or 16 years ago, and now they play in the Arizona Territories Vintage Base Ball League.