Preservation of open space: A perennial issue in city elections 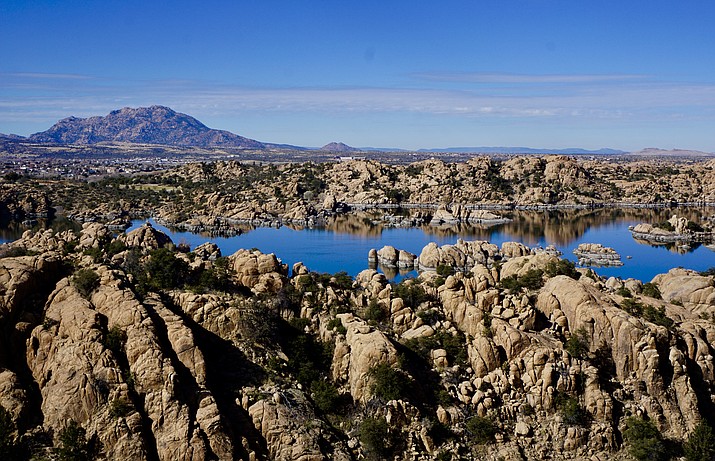 The City of Prescott’s 2017 purchase of 160 acres of Granite Dells land in the Storm Ranch North has led to the construction of a network of new recreational trails, some of which offer sweeping views of the nearby Watson Lake. (Cindy Barks/Courier)

Editor’s Note: This is the sixth in a series of questions that The Daily Courier posed to the five candidates running for Prescott City Council, leading up to the Aug. 27 primary. Watch for the seventh candidate question in Sunday’s Courier.

For two decades or more, the preservation of Prescott’s scenic, open land has been a hot-button issue in City Council elections.

This year is no different. Audience questions at candidate forums have regularly zeroed in on open-space matters – focusing specifically on the Granite Dells area.

Earlier this year, city officials stressed that buying and preserving open space has been a long-term goal for the city. In a March presentation, the city pointed out that nearly 1,900 acres of land had been preserved around Watson and Willow lakes in the Granite Dells area over the past 20 years or so.

Included in that total is the land that makes up the lakes themselves, the creekside terrain of the Flume Trail, the scenic boulders of the Constellation Trail and rolling granite of the Storm Ranch North.

A compilation of the city’s past Granite Dells purchases begins with the 1998 purchase of Willow and Watson lakes from the Chino Valley Irrigation District.

That $15 million purchase was the result of a voter-approved bond issue, which Prescott property owners paid off over the next 15 years through their property taxes.

Then, in 2000, voters again approved a preservation-related tax, when they agreed to extend the duration of the city’s existing 1 percent street sales tax and add in open space acquisitions.

That resulted in the purchase of about $18.3 million worth of open-space parcels over the ensuing years.

However, the total is considerably less than the $40.7 million that city officials promised back in the lead-up to the 2000 sales tax election — a point that open-space advocates have stressed.

In the wake of the streets/open space sales tax, which ended in 2015, the City Council agreed to set aside $3.8 million of the remaining tax revenue for open-space acquisitions.

The city used $2 million of that amount in late 2017 to buy 160 acres of the Storm Ranch North. Since then, a network of trails has been built through the parcel’s sea of granite.

Prescott Budget and Finance Director Mark Woodfill reported this past week that about $1.8 million remains in the open-space account.

Although officials have declined to discuss the specifics, Community Outreach Manager John Heiney said, “We are continually looking at potential sites for open space, and staff members are working with property owners.”

The Daily Courier asked each of the four candidates running for Prescott City Council, as well as one for mayor, to comment, in 70 words or less, on the importance of open space:

How important is open space in the community, and should the City Council be doing more to acquire open land? How would you pay for it?

Greg Mengarelli: Open space is extremely important to me personally and to our citizens. We have majestic vistas and lakes that have been preserved, but our work is not done. We will continue to look for opportunities to preserve open space well into the future. The most likely funding source will be working with developers to get important and iconic lands put into open space.

Cathey Rusing: Prescott citizens have consistently told me how much they value and want to enhance public open space. In 2000, voters approved a sales tax for roads and open space; $190 million was raised, but only $20 million was used for open space. We had the money, but not the leadership. Perhaps, once the unfunded PSPRS liability is paid off, voters may approve an exclusive smaller tax for open space.

Steve Sischka: Too often, open space is “I don’t want to look at houses.” The voters of Prescott soundly turned down the last open-space sales tax proposition a few years ago. What does that mean for the future of Prescott purchasing open space? Not sure. I do know that open-space purchases need to be strategic. I also believe that Prescott alone should not have to bear the price of purchasing regional treasures. Public, make the choice.

Billie Orr: Open space and trail connectivity are extremely important to Prescott and ecotourism. The city continues to acquire outdoor space for trails and recreation. We purchased 160 acres in the Granite Dells last year, accepted a gift of 25 beautiful acres in the Granite Dells, and granted an easement to ECOSA/Prescott College for six new miles of trails. We will continue to negotiate with conservation groups, state land officials and developers to acquire trail easements and land.

Jim Lamerson: Very. Assign a portion of bed tax and dedicate a percentage of current sales tax in a dedicated fund for current or future opportunities.