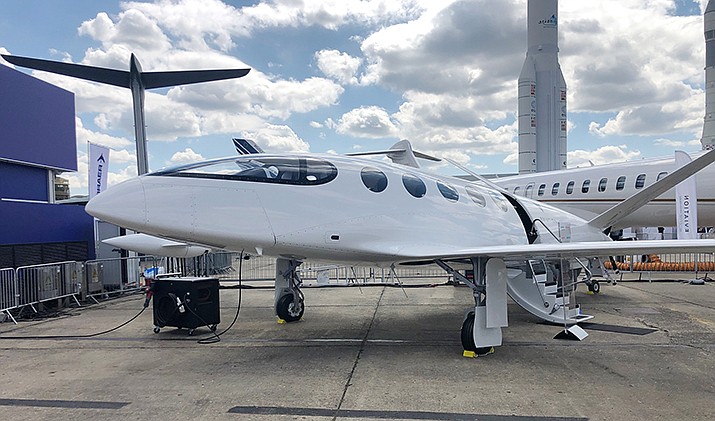 Prescott is making headlines locally and throughout the world of aviation. This June, City Manager Michael Lamar and I attended the Paris Air Show where Eviation’s newest technology was beautifully on display, and Prescott also took center stage.

At the invitation of Eviation CEO and Founder, Omer Bar-Yohay, on June 17-20 we were able to take part in the unveiling of “Alice” in Paris, France.

As a member of the NASA, FAA and GAMA electric aviation committees, Eviation is a leader and key proponent in the future of the aviation industry, particularly in regard to electric aircraft.

Alice is an electric aircraft currently under development; it is built from 95% composite materials and controlled by fly-by-wire and three propellers. She will be designed to take nine passengers up to 650 miles at a cruise speed of 240 knots, and that design will take place right here in Prescott.

Coverage of Alice’s unveiling at the Paris Air Show press conference was broad, and included publications and news outlets such as Forbes, CNBC, MSNBC, BBC News, Reuters, Bloomberg and Yahoo Business. Eviation’s ongoing relationship with Embry-Riddle Aeronautical University (ERAU) and the Prescott Regional Airport has been highlighted by these news outlets and will be paramount in the continuing development and growth of aviation in the Prescott community.

In addition to myself and Mr. Lamar, Arizona was represented in Paris by the Arizona Commerce Authority, which helped to promote our community and the entire state for leading-edge technology and aviation.

The Alice aircraft will be brought to Prescott and housed in a hangar at the Prescott Regional Airport. After being transported back from Paris later this summer, Alice will be reassembled for development work to continue, with the assistance of ERAU faculty and staff beginning in August. Eviation’s goal is to have full FAA certification of the Alice aircraft in 2021. We also expect that Yavapai College will play a role with training and certification for manufacture of the aircraft and associated components.

The bottom line is that partnerships with companies like Eviation, which see the potential and greatness that we all already know exists here, is incredibly beneficial for the City of Prescott and our community as a whole. The opportunity for students to work with a company of Eviation’s caliber and then potentially continue to work at that level while staying in our community is truly a dream.

Between development of the Alice aircraft and the ongoing beautification and growth of the Prescott Regional Airport, I am thrilled to see how the world of aviation can continue to positively impact Prescott.

Greg Mengarelli is mayor of Prescott.