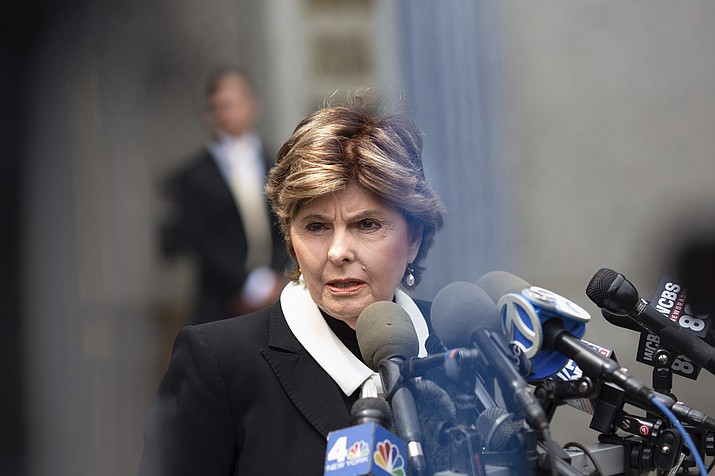 Attorney Gloria Allred addresses the media after attending a preliminary conference in the sexual misconduct trial of Jeffrey Epstein Wednesday, July 31, 2019, in New York. District Judge Richard M. Berman said Wednesday that June 2020 is the earliest Epstein will stand trial on sex trafficking and conspiracy charges. He has pleaded not guilty and is currently being held in a Manhattan jail. (Kevin Hagen/AP)

There was no mention at the Manhattan federal court appearance or any visible sign of injuries after the 66-year-old financier was found on the floor of his cell last week with neck bruises.

Epstein's lawyer, Martin Weinberg, refused to say what might have left his client with the bruises after the court hearing.

Assistant U.S. Attorney Alison Moe urged a June trial date for the man accused of arranging to have sex with girls as young as age 14, saying there is "a public interest in bringing this case to trial as swiftly as possible."

But Weinberg said the case is far from "ordinary," adding the defense team won't be ready before Labor Day 2020. He said prosecutors delayed bringing charges that relate to alleged crimes that occurred in the early 2000s at Epstein's residences in Manhattan and Florida.

U.S. District Judge Richard M. Berman said a trial projected to last four to six weeks could tentatively begin June 8, but he'll likely defer to defense lawyers' needs if they are not ready.

Epstein's demeanor in court was noticeably different from previous appearances, when he was actively engaged with his lawyers and looking through papers.

On Wednesday, he sat quietly, his hands folded in front of his face through much of the 20-minute proceeding. Occasionally, he looked toward courtroom artists and reporters seated in a jury box.

Epstein has remained at the Metropolitan Correction Center, which is adjacent to the downtown Manhattan courthouse.

He has pleaded not guilty to sex trafficking charges that carry the potential for up to 45 years in prison.

Berman refused bail after concluding he is a danger to the community and a flight risk. Prosecutors have said they fear he might try to influence a growing number of witnesses who support charges that he recruited and abused dozens of girls in New York and Florida in the early 2000s. His lawyers had argued he should be allowed to stay under house arrest in his Manhattan mansion.

His lawyers say an agreement reached with federal prosecutors a dozen years ago disallows the charges, and they say he has committed no new crimes.

The lawyers agreed to file written arguments about the agreement and double jeopardy claims by Sept. 13. Oral arguments will occur in October.

The non-prosecution deal was reached before he pleaded guilty in state court in Florida to prostitution-related charges involving underage girls. Afterward, he was required to register as a sex offender and pay restitution to many victims. While he served a 13-month jail term, he was permitted to leave jail to work for 12 hours a day, six days a week.

Epstein was arrested July 6 when he arrived at a New Jersey airport on a private jet from Paris, where he has a home.