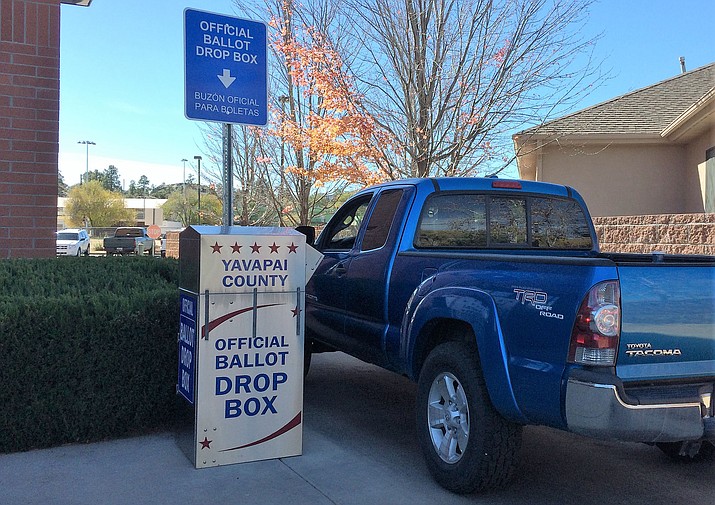 Ballots for the 2019 Prescott City Council primary are scheduled to go out in the mail on July 31. Prescott voters have until Aug. 27 to cast their ballots in the city primary – either through the mail, in person, or at a drop box. In a 2018 file photo, a voter casts a ballot at the Yavapai County official ballot drop box at the County Administration Building, 1015 Fair St., Prescott. (Les Stukenberg/Courier file)

More than 30,000 ballots will begin making their way to Prescott voters today, as the Yavapai County Recorder’s office launches the City Council mail-in primary for the city.

Yavapai County Registrar of Voters Laurin Custis reported Tuesday, July 30, that all 30,131 of Prescott’s registered voters will be mailed a ballot on Wednesday, July 31.

Earlier, city officials had estimated that the ballots would begin going out on Aug. 2, but Custis clarified this week that date is the deadline for ballots to go out. A number of ballots for recently registered voters likely will be mailed on Aug. 2, she added.

Custis explained that the early-voting option is a “no-excuse absentee” process, which means that any registered voter may cast a vote in person for any reason. The option would be convenient, for instance, for voters who expect to be out of town when they get their actual ballot in the mail, Custis said.

Early voters should visit the Yavapai County Recorder’s office at 1015 Fair St., Room 228, Prescott, from 8 a.m. to 5 p.m., Monday through Friday, to cast their early ballots.

For voters awaiting their regular ballots in the mail, the county is suggesting that they call the recorder’s office at 928-771-3248 if they have not received their ballot by Friday, Aug. 9.

The deadline for casting the mail-in ballots is 7 p.m., Tuesday, Aug 27.

The City of Prescott pointed out this week that the Aug. 27 primary will determine whether a general election will be needed on Nov. 5.

A July 30 news release from the city’s communications and public affairs office explained the process the city uses in determining a majority vote.

In the mayor’s race, a majority is calculated by taking the total number of valid ballots cast (using the number provided by the County Elections office), minus “undervotes, overvotes, and invalid write-ins.”

The city determines the majority vote by dividing that number in half and adding one.

Majority is calculated in the council race by taking the total number of valid ballots cast, as provided by the county elections office, minus over-votes. “This number is divided in half, and one is added to determine majority,” the news release states.

“The reason for this deduction is that the intent of the voter cannot be determined if more votes are made than the number of seats available to be elected,” the release adds. “Under votes and in-valid write-ins are not deducted because raw numbers are provided by the county and cannot be calculated, therefore the ballot is considered valid.”