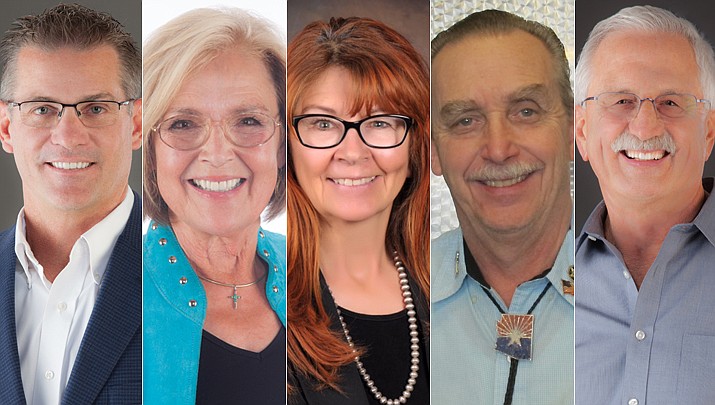 Editor’s Note: This is the fifth in a series of questions that The Daily Courier posed to the five candidates running for Prescott City Council, leading up to the Aug. 27 primary.

While Prescott officials say proposed changes in the way the city tracks and manages its water portfolio would more accurately reflect reality, a City Council challenger sees them as “pro-growth.”

Throughout the summer, city staffers have been rolling out a series of recommended changes in Prescott’s water policy.

Driven largely by two new water studies that showed that Prescott’s water use has been decreasing even as its population has been gradually increasing, the changes would adjust the way new development is allocated water.

Officials have explained that the existing water-management policy has tied the amount of water allocated to new development to projections of how much water each home will use.

Recently, the city adjusted that to 0.25 or 0.2 acre-foot per home (depending on the home’s conservation features). That amounted to about four or five homes per acre-foot of allocated water.

But by using current figures, the water use actually translates to about seven homes per acre-feet of allocated water, city officials say.

Because of the fluctuating and downward trend in water usage, the city is recommending doing away with the allocation amount altogether.

That is just one of the changes being proposed. Another would involve extending water service to development outside city limits.

A decision on the proposed changes is yet to come. A review of the changes is scheduled for 1 p.m. Aug. 27, and a vote on adoption is set for 1 p.m. Sept. 10. Meanwhile, candidate Cathey Rusing, the only challenger running for a seat on the council, has maintained that the changes would be “pro-growth.”

The Daily Courier asked each of the candidates running for Prescott City Council and mayor to respond, in 70 words or less, to a question regarding the water policy changes:

What is your opinion of the city’s proposed water-policy changes? Do you consider the policy changes to be pro-growth, and why or why not?

Jim Lamerson: I will abide by the policy the majority of the council establishes. The policy we currently have has served the community well.

Cathey Rusing: The city’s new policy is absolutely pro-growth. Allowable houses per acre-foot of water would double (from three to seven) and it ignores safe yield requirements. Water is a finite, precious resource that must be protected. Local conservation paired with regional planning and cooperation is vital. Instead of hiring out-of-town consultants, the council needs to collect data for strategic planning from our local, science-based experts, like CWAG (Citizens Water Advocacy Group).

Steve Sischka: I consider the policy changes to be pro-reality. This is not found water. We are pumping the same amount of water now as we were in the early 2000s, and the previous estimates of our water needs into the future had been greatly exaggerated. We are simply quantifying what we really have so that we can make realistic decisions in the future.

Billie Orr: I support water policy based on real-time data. Council began studying the policy changes in June and will conclude this fall. Ensuring our water policy is based on facts and data is long overdue. Technology has enabled the city to propose policy that is based on exact usage, not estimates.

No, the policy isn’t pro-growth or anti-growth. Our water policies should be based on true facts about assured water supply, conservation, demand vs supply conditions, recharge and recovery.

Greg Mengarelli: The city has had a very robust water-conservation program, and I believe the changes are beneficial in conserving even more water. The changes are intelligently designed to focus incentives where conservation can be the most effective. Based on two recent water studies we have conducted in the past six months, we can do an even better job improving our water policy because we have better and more up-to-date data. Based on our studies, I am certain we have all the water we need for the future build-out of Prescott for generations to come.