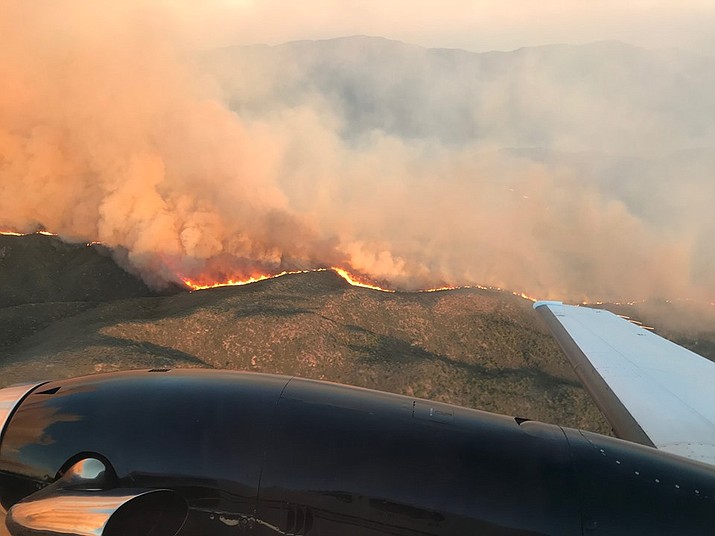 An aerial view of the Cellar Fire on July 17. (PNF/Courtesy, file)

The Prescott National Forest Burned Area Emergency Response (BAER) team has begun its initial assessment of the impacts of the Cellar Fire, which has burned more than 7,000 acres and remains 80% contained, according to spokesperson Debbie Maneely on Sunday afternoon.

The BAER program is designed to identify and manage potential risks to resources on National Forest System lands and lessen these threats through appropriate emergency actions to protect human life and safety, property and critical natural or cultural resources.

An air tanker getting prepped at Prescott Airport Wednesday morning, July 17, to fight the Cellar Fire, which is burning just south of Prescott. (Lucas Reed/Courtesy, file)

“The next phase involves completing a values-at-risk assessment for the Cellar Fire,” Maneely said in a press release Sunday. “This assessment will determine and prioritize work within the fire area; followed by modeling and analyzing data before completing a report that will be given to Forest Service officials.”

Located 16 miles south of Prescott on the Bradshaw Ranger District, the Cellar Fire was started July 14 by lightning and continues to burn grass, brush and chaparral.

Wildfires increase the potential for post-fire flooding, soil erosion and debris flows that could impact recreational areas, homes, structures, roads and other infrastructure within, adjacent to, and downstream from burned areas.

Maneely said residents and visitors should remain alert to possible flooding when traveling along roads downstream from the burned areas on the Forest.

“Everyone near and downstream from the Cellar Fire burned area should remain alert and stay updated on weather conditions that may result in heavy rains over the area. Flash flooding could occur quickly during heavy rain events,” Maneely said.