Candidates weigh in on AED annexation in Granite Dells 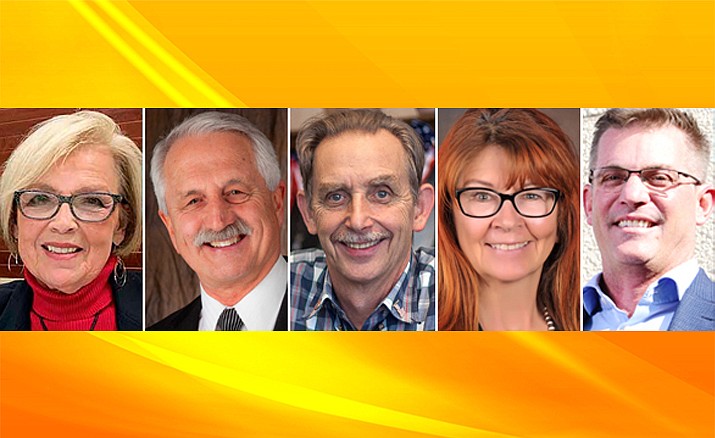 From left to right: Billie Orr, Steve Sischka, Jim Lamerson and Cathey Rusing have filed petitions to run for the three council seats that will be decided this year. Prescott Mayor Greg Mengarelli will not face an opponent in his bid for a second term. (Courier file photos)

Editor’s Note — This is the second in a series of questions that The Daily Courier posed to the five candidates running for Prescott City Council, leading up to the Aug. 27 primary.

For more than a year, the proposal by developers Arizona Eco Development (AED) to build hundreds of homes in the Granite Dells has generated controversy in the community.

During this year’s Prescott City Council election season, the pending development has been the No. 1 topic for questions from the audience.

The City Council recently discussed the proposed annexation and development in closed-door executive session, and city officials say the Planning and Zoning Commission’s review of the project has been pushed off once again — possibly until late August.

On July 16, Planning Manager George Worley reported that city staff completed its initial review of the submittal more than a month ago.

“We’ve done a review of all of the master reports (on roads, drainage, water and sewer),” Worley said. “Those were put back to (the developer) for revisions.”

He noted that revisions are a typical part of the review process. “It’s not unusual for us to do two to three reviews for big projects,” Worley said.

Once the developer gets the plan revisions back to the city, Worley said, it likely would take up to three weeks for city staff to review any changes.

The master reports deal with how the development will connect to and impact the city’s existing systems, Worley said, adding that the revisions were suggested by the city Public Works Department.

When AED submitted its complete application to the city in April, developers proposed preserving about 250 acres of open space, much of it near the iconic Point of Rocks.

Local Dells advocacy group Save the Dells has been pushing for 500 acres of preserved open space, and the group deemed AED’s final proposal inadequate.

The Daily Courier asked each of the four candidates running for Prescott City Council, as well as one for mayor, to respond, in 70 words or less, to a question regarding AED’s proposal:

What is your opinion of the AED annexation? How would you vote if the current proposal for 250 acres of preserved open space goes to the council?

Greg Mengarelli: Any annexation requires the council to thoughtfully consider the costs and benefits and then determine if it is a good deal for our citizens. The AED annexation involves some very sensitive and important natural assets that need to be preserved. Annexations are very complex agreements with lots of variables and factors involved. I don’t believe the latest proposal (that includes approximately 250 acres of public open space) is the best agreement the city can negotiate with the developer; therefore, I wouldn’t support it.

Jim Lamerson: I have not seen a completed proposal. After the Planning and Zoning Commission process I will be better positioned to have or share my opinion.

Billie Orr: While the AED annexation has been challenging, there is tremendous opportunity for the city to negotiate for magnificent public open space within the Granite Dells and for crucial land to the north to protect our airport and runway expansion. My goal is to acquire quality public open space in the Granite Dells that will include the Point of Rocks, No Name Creek, riparian area and without any additional crossings on the Peavine Trail.

No (on whether Orr would vote for the current proposal for 250 acres of preserved open space).

Cathey Rusing: I am not opposed to AED’s annexation. However, I would vote against the current proposal: A) In exchange for tremendously increased property values AED receives from annexation, and recognizing the long-term financial liability of providing ongoing services (water, sewer, roads, police and fire), the taxpayers deserve a better deal. B) We expect quantity AND quality public open space to protect the heart of the Dells. Only 250 acres sells Prescott short.

Steve Sischka: AED exercised its right to ask for annexation into the City of Prescott. As such, there are unique opportunities and obligations presented to the city as a result. We have to weigh those carefully before making a decision. We need to let the process go forward with public input so that there can be a possible mutually beneficial solution.