Pittsburgh marks its 4th alligator sighting since May 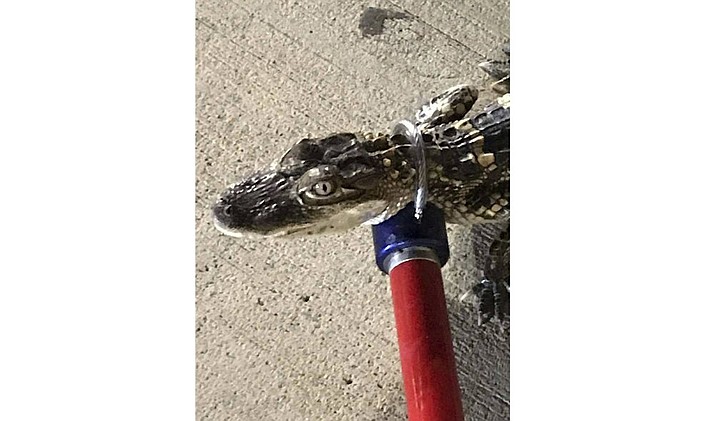 This photo provided by Shaler Township Police shows a baby alligator has been found in the parking lot of a grocery store near Pittsburgh. Shaler Township, Pa., Police Lt. Dave Banko says an employee found the 2-foot-long creature Friday, July 19, 2019 near a garbage can at the Giant Eagle grocery store. The police department posted on its Facebook page that reptile's owner should send them a message. Paul McIntyre, of Big Daddy Wildlife Removal, says the animal was healthy, docile and seems like a pet. (Shaler Township Police via AP)

PITTSBURGH — A baby alligator was found far from the tropics in the parking lot of a grocery store outside Pittsburgh on Friday morning, the fourth alligator discovered near the city since May.

An employee found the 2-foot-long (60-centimeter-long) creature near a garbage can at the Giant Eagle grocery store in Shaler, about 10 miles (15 kilometers) north of Pittsburgh.

“It looks like a little baby alligator,” Shaler Township Police Lt. Dave Banko told the Tribune Review newspaper. “Someone dropped it off or lost it.”

Paul McIntyre, of Big Daddy Wildlife Removal, came to take the animal from police and said it was healthy and docile.

“It was somebody’s pet, I can guarantee you,” McIntyre told the newspaper. “He’s so friendly. Somebody had him as a pet, couldn’t take care of him and let him go.”

Three other gators have been found around Pittsburgh since May.

Police speculate that the spate may at least partly stem from people who bought the animals as pets when they were little decided to release them when they started getting too big. It’s not illegal to own an alligator in Pennsylvania.

“We strongly discourage anyone from having a pet alligator. Just because you buy one that’s 8 inches long doesn’t mean it will stay that size,” said Pittsburgh police spokesman Chris Togneri. “And it’s very irresponsible to just let it go.”

Police determined the 5-foot-long alligator — which was named Chomp — had escaped from a home.

Chomp’s owner is now facing 33 counts of neglect, along with single counts of animal cruelty and recklessly endangering another person.

Police removed 32 animals from the owner’s home, including three more alligators; three snakes, including Burmese pythons, a lizard and some iguanas.