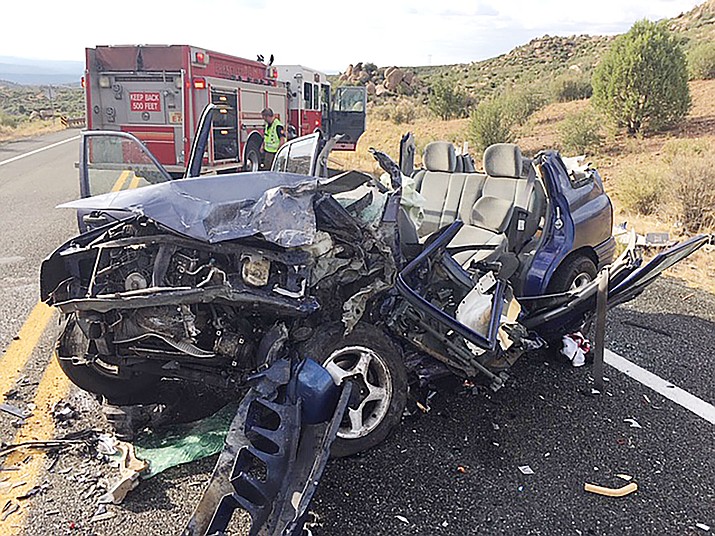 The driver of this SUV was flown to a Phoenix hospital Friday after suffering what appeared to be life-threatening injuries in a head-on collision on Iron Springs Road, the Prescott Fire Department reported. (PFD/Courtesy)

The driver of an SUV was flown to a Phoenix hospital on Friday afternoon after suffering what appeared to be life-threatening injuries in a head-on collision on Iron Springs Road, the Prescott Fire Department reported.

At around 4 p.m., fire engines from Central Arizona Fire and Medical Authority (CAFMA) and Prescott Fire Department (PFD) responded to reports of the crash near the Doce Pit recreational area, according to a PFD press release. Two engines and a battalion chief responded to the call along with Yavapai County Sherriff deputies.

Both vehicles came to a stop in the middle of the road, blocking traffic in both directions.

CAFMA Engine 51 began an extensive extrication on the SUV to gain access to the man, while Prescott Engine 74 provided treatment, as he had suffered multi-systems trauma in the impact, the release stated.

The man in the SUV was flown to a Phoenix hospital with life threatening injuries, while the driver of the pickup suffered minor injuries and ultimately refused treatment or transport, the release stated.

Traffic was rerouted down White Spar Road while Iron Springs Road was closed for approximately one hour in order to conduct the investigation.