Benevolent or fearsome? Yellowjackets can be both 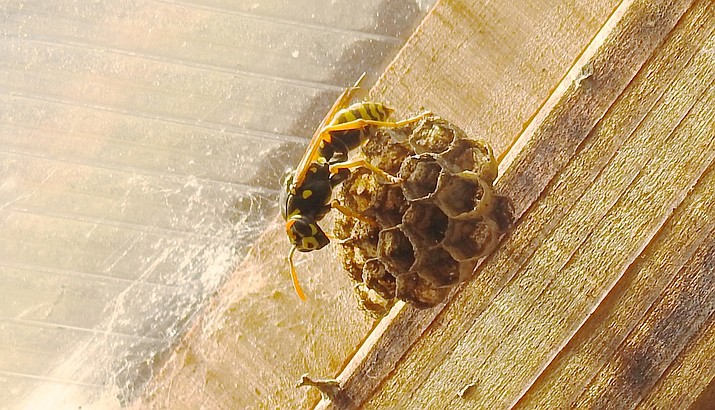 A Yellowjacket, on the ceiling of a hobby greenhouse. (Dean Fosdick via AP)

Yellowjackets play a supportive role in gardening but can be dangerous around families and pets. People sensitive to bee venom should be especially careful from August through October, when yellowjacket numbers peak.

They attack when threatened, and are known to crash cookouts too.

“Yellowjackets, hornets and paper wasps are all beneficial predators of soft-bodied insects such as caterpillars, grubs and flies,” said Heather Stoven, a horticulturist with Oregon State University Extension Service. “However, yellowjackets will often begin to scavenge late in the summer into fall as their typical food sources often become more limited.

“They begin to look for carrion (think your hamburger at a picnic) as well as sugary foods ... which can lead to increased negative encounters,” Stoven said.

Yellowjackets deliver the insects and food they forage to the young in their nests, while nourishing themselves on nectar from flowers.

That makes them inadvertent pollinators, although they aren’t as efficient as honeybees since their shiny bodies have little body hair where pollen can collect for transfer from plant to plant, Stoven said.

“Their nests are usually small and placed under protective overhangs on houses and garages,” said James Dill, a pest management specialist with University of Maine.

Gardens home to both helpful, harmful insects
Backyard Gardener: Harvester ants are beneficial, should be left alone
Backyard Gardener: What you need to know about odorous house ants
Powers: Wildlife around us!
Safely manage insects on indoor plants