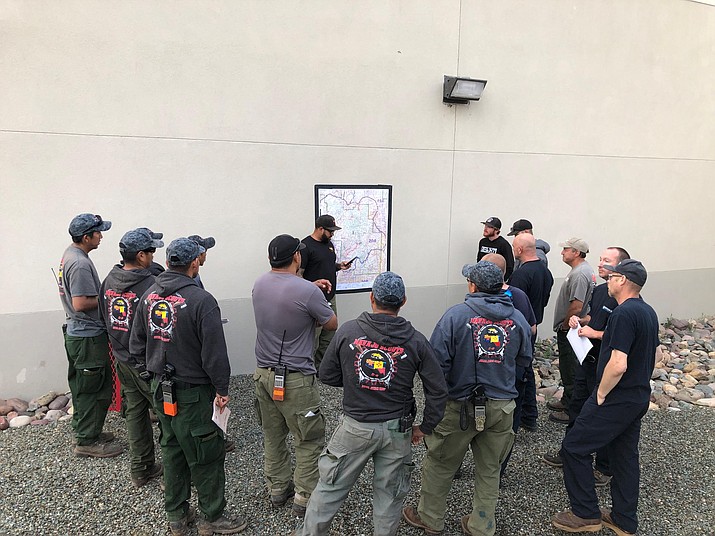 Firefighters meet a morning briefing about the Cellar Fire Tuesday, July 23, to discuss their assignment for the day. (USFS/Courtesy)

The cool, moist weather is keeping the Cellar Fire in check, with no additional growth since Saturday, July 20, the Forest Service reported.

The fire, which was started by lightning about 16 miles south of Prescott on July 14, is burning on the Prescott National Forest in Ponderosa pine, brush, grass and chaparral. As of Wednesday morning, it was about 7,512 acres in size and 58% contained. Resources still assigned include 314 personnel — made up of one Hotshot crew, three Type 2 initial attack crews, two Type 2 crews and seven fire engines.

With minimal fire activity expected moving forward, the Southwest Area Type 1 Incident Management Team Num. 1 that took command of the operation Thursday, July 18, plans to transition the fire back to the Prescott National Forest (PNF) at 6 a.m. Thursday, July 25. Demobilization of resources was already underway Wednesday. All evacuation and pre-evacuation notices have also been lifted by the Yavapai County Sheriff's Office.

Fire managers will continue to monitor the fire by air, as much of the uncontained fireline on the east side of the fire is in steep, rugged, remote terrain, Maneely said.

As thunderstorms continue in the area, she said firefighters are prepared to respond to changing conditions, including gusty outflow winds, heavy rain and frequent lightning.

The Prescott National Forest Cellar Fire Public Safety Closure Area was reduced in size as of 6 a.m. Wednesday. Detailed information and a map are available on Inciweb at https://inciweb.nwcg.gov/incident/6443.

A Temporary Flight Restriction (TFR) remains in effect. Wildfires are a No Drone Zone.

“If you fly, we can’t,” Maneely said. “Every time a drone is spotted near the fire, all aircraft are grounded until we can be sure the drone is clear of this area.”

As fire activity winds down and monsoon activity continues, people living downstream of the burn scar should consider the potential for post-fire flooding. The Yavapai County Flood Control District provides information on how to prepare for such flooding: www.ycflood.com.

Watch the Courier for additional updates.