Manieri: If only President Trump would channel George Costanza 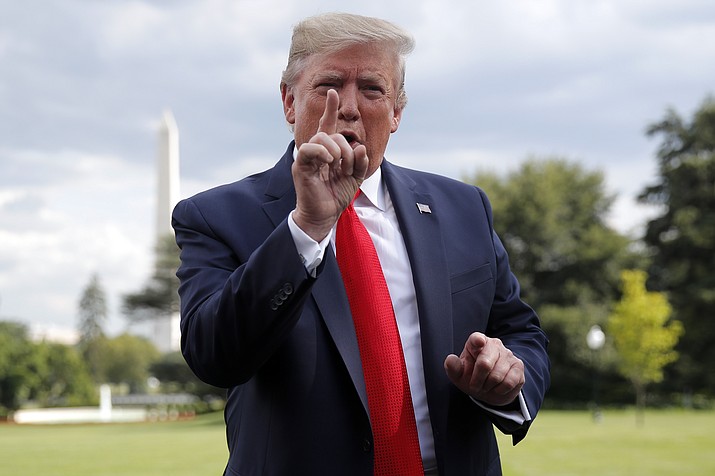 President Donald Trump speaks to members of the media at the White House in Washington, Wednesday, July 24, 2019,

My father once told me, “Sometimes, doing nothing is doing something.”

It’s a little Yogi Berraesque, but it makes a lot of sense when you really think about it.

This, of course, is not President Donald Trump’s philosophy of life.

He’s more of a tweet-tweet-and-tweet-some-more kind of a guy.

Trump sees social media, Twitter in particular, as a way to deliver his unfiltered thoughts directly to the masses without dealing with what he believes — and correctly so — is a media establishment that can’t stand the sight of him. Not a bad strategy if the person tweeting doesn’t have the temper of Yosemite Sam.

Two weeks ago, the Democrats were taking turns poking each other in the eye. It was great theater, and the beauty for Trump and the Republicans was they didn’t have to do anything other than sit back and watch the Democrats unravel.

The Squad appears hell-bent on taking the party farther and farther to the left until eventually doing a Thelma and Louise off the precipice.

If only the president would channel George Costanza.

“Everybody’s doing something. We’ll do nothing!”

Instead, while the Democrats were sowing chaos, and thereby doing everything possible to ensure another Trump victory in 2020, Trump fired off one of his trademark Sabbath tweets on July 14, apparently aimed at The Squad.

“So interesting to see “Progressive” Democrat Congresswomen, who originally came from countries whose governments are a complete and total catastrophe, the worst, most corrupt and inept anywhere in the world (if they even have a functioning government at all), now loudly … and viciously telling the people of the United States, the greatest and most powerful Nation on earth, how our government is to be run. Why don’t they go back and help fix the totally broken and crime infested places from which they came.”

There are a lot of things wrong with the tweet, not the least of which is three of the congresswomen, with the exception of Omar, who was born in Somalia, “originally came from” the United States.

The media have spent the last few days referring to Trump’s “racist tweets.”

There’s a difference between racist and dumb, as Andrew McCarthy wrote last week in National Review.

“Is it ‘racist’ to tell people who have contempt for the country — who abhor the common culture that makes us American — that they ought to go back to where they came from?” wrote McCarthy. “It has nativist and reactionary overtones, but I don’t think it is racist.”

Nevertheless, the tweets seemed a gift to the Democrats, courtesy of their nemesis in the White House.

The tweets did bring Democrats together, united them against a common foe — for about half an hour.

By last Tuesday, The Squad and Pelosi were making fists at each other once again.

In an interview with CBS, Tlaib called out Pelosi to “acknowledge the fact that we are women of color ...” insinuating that Pelosi’s criticism of The Squad was somehow racially motivated.

The reality is that Pelosi has enough sense to know that if the progressive/socialist wing of the Democratic Party continues to gain traction, Trump will win re-election in a walk.

We know that Trump will never be content to simply observe while the Democrats destroy themselves. Trump is not apologizing for his July 14 tweets, and we know there will be more tweets and, in response, more selective, moral outrage.

In the midst of all of this bickering about who’s the bigger racist, we long for a voice of reason.

Is there someone out there who can restore order? Who can bring decorum back to our political discourse?

On July 16, the former vice president and current presidential candidate challenged Trump to a push-up contest. Biden appeared to be joking but who really knows anymore.

Either way, it’s a fantastic idea.

Who doesn’t want to see two major political figures, in their 70s, stripped down to their skivvies, trying to max out?

No, this wouldn’t prove anything, would be a complete waste of time and would ultimately amount to nothing.

Rich Manieri is a Philadelphia-born journalist and author. He is currently a professor of journalism at Asbury University in Kentucky. His book, “We Burn on Friday: A Memoir of My Father and Me” is available at amazon.com. You can reach him at manieri2@gmail.com.