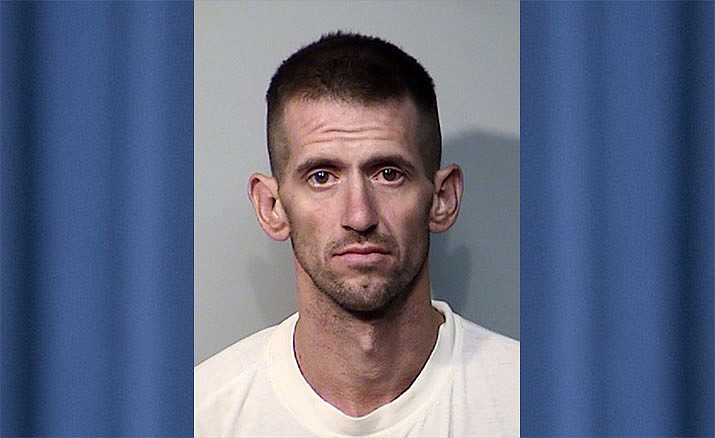 Seth Jackson, 35, was arrested on July 19 on charges of fraudulent schemes and artifices, theft and acting in the capacity of a contractor without a license. (YCSO/Courtesy)

A Cordes Lakes man was arrested on July 19 for accepting money to do a roofing job and then using the money for personal purchases, all the while falsely posing as a licensed contractor.

Deputies with the Yavapai County Sheriff’s Office (YCSO) received the fraud complaint from a man whose home is being constructed on Russell Flats Road in Cornville, YCSO reported.

The victim told deputies he directly deposited $19,500 with Seth Jackson, 35, so materials could be purchased for a new roof. Jackson had told the victim he was a licensed contractor and had a new business called “24/7 Roofing” supposedly based in Camp Verde. The victim knew Jackson had been associated with roofing companies in the past, so believed the deal to be legitimate, YCSO reported. The original agreement between the two men was negotiated and signed in December of 2018.

When the basic structure was ready for roofing, Jackson never brought out the necessary materials to begin the project, according to the victim statement. Instead, he brought out a small trailer containing junk metal parts and claimed it was part of the job. As the lack of any work continued, the victim had to repair and replace the felt roofing material due to the weather, deputies were told. Jackson then put on a small amount of flashing material around edges, but never started roofing the home.

The victim provided deputies with text exchanges between him and Jackson over the next several months. Jackson admitted using some of the money to cover issues related to personal problems and buy tools, YCSO reported.

“Nothing in the agreement permitted the use of the victim’s money for these purposes,” YCSO spokesperson Dwight D’Evelyn said.

The victim eventually reported Jackson to the Arizona Registrar of Contractors while providing the opportunity over the last several months to complete the work, even offering to help when needed, YCSO reported. At one point during this time, the victim even received photos via text from Jackson purporting to show roofing work on the victim’s home, when in fact it was not the victim’s home, D’Evelyn said.

Since the report on June 30, deputies attempted to locate Jackson in the Camp Verde area without success – he had apparently been evicted from a residence on West Northern Avenue. They confirmed he was not a registered contractor and had several unrelated law enforcement contacts in the area.

Deputies eventually found Jackson at a family home on South Black Mountain in Cordes Lakes on July 10. When confronted, he claimed he was working for another roofing company after being unable to get his business running. He admitted he was not a licensed contractor, YCSO reported. Deputies contacted that company and discovered Jackson was not on their payroll and used this job reference as a means of telling the victim this other roofing company would complete the work, Develyn said.

The case review continued and resulted in probable cause to arrest Jackson for fraudulent schemes and artifices, theft, and acting in the capacity of a contractor without a license. He has since been booked and remains in-custody on a total bond of $11,500.

The Arizona Registrar of Contractors is conducting a separate investigation into Jackson’s activity, YCSO reported.

“This case is an example of the need to do your research and verify licensing information before signing contracts and providing down payments,” D’Evelyn said.