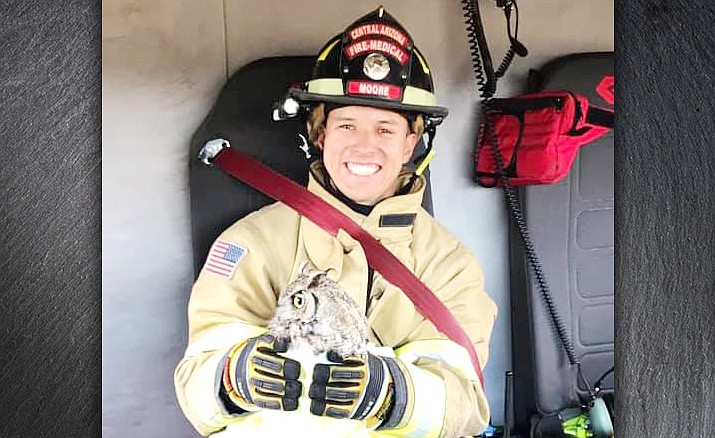 Central Arizona Fire and Medical Authority firefighter Aaron Moore holds an owl that he and several other firefighters rescued in Prescott Valley on July 10. Moore was burned while mopping up a mulch fire in Camp Verde on Sunday, July 21. (CAFMA/Courtesy)

A Central Arizona Fire and Medical Authority (CAFMA) firefighter and a Coconino National Forest firefighter were burned while cleaning up a mulch fire in Camp Verde on Sunday, July 21, according to fire officials.

The accident occurred at the Camp Verde Transfer Station, where a one-acre, slow-burning mulch fire has been burning since July 10.

Crews were extinguishing hotspots at the scene when a Forest Service firefighter fell into a pit of hot ash.

“He burned his lower torso and legs,” said Brady Smith, public affairs officer with the Coconino National Forest. “From what I understand, it was about 24% of his body.”

While the firefighter was attempting to roll out of the pit, a CAFMA firefighter, Aaron Moore, tried to assist him.

“Right as the Forest Service employee got out, Aaron fell in,” said Cody Rose, a CAFMA battalion chief. “He pushed to get out pretty quickly, but not before getting burns on his legs.”

Both firefighters were transported to a burn center in Maricopa County and their families are receiving help from the Professional Fire Fighters of Arizona and other firefighter support organizations.

Moore remains “stable and in good spirits,” Rose said. However, doctors said it could take up to a month for him to fully recover and be able to return to work.

Anyone who wishes to donate money or assist the injured firefighters in some other way may call Rose at 928-713-9526.