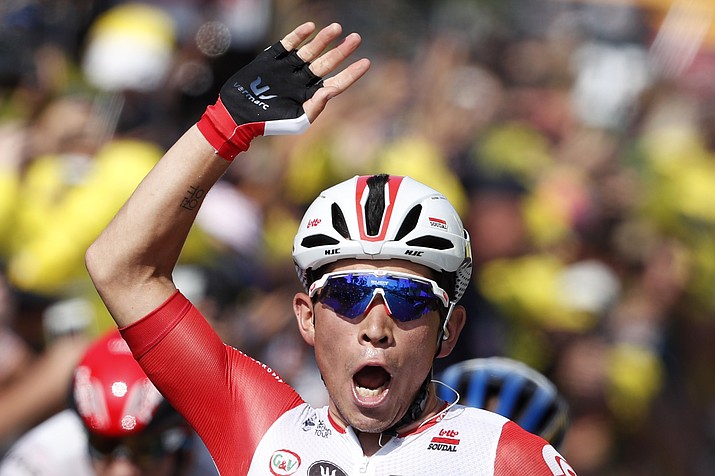 Australia’s Caleb Ewan celebrates as he crosses the finish line to win the 16th stage of the Tour de France over 117 kilometers (73 miles) with start and finish in Nimes, France, Tuesday, July 23, 2019. (Thibault Camus/AP)

After hitting the ground twice over the past two weeks, the Welshman fell off his bike one more time on Tuesday as a heat wave engulfed the race ahead of grueling days in the Alps when the Tour will reach its climax.

Once again, Thomas was lucky enough to escape with bruises and scratches, but the timing of his crash in the rural hinterland of the antique Roman city of Nimes was unfortunate. Although Thomas quickly got back on his bike and did not lose time, crashes always have a lingering effect on riders’ bodies. It’s generally after 48 hours that the soreness reaches its peak, and that’s when he will be fighting in high altitude with rivals trying to take him off his perch.

Lagging 1 minute, 35 seconds behind race leader Julian Alaphilippe with the race now going into its five last stages, Thomas was caught off guard under a scorching sun about 40 kilometers into the stage won by Australian sprinter Caleb Ewan.

The peloton was not riding at full speed, but Thomas was surprised.

“I just had one hand on the bars, and the gears jumped and jammed and I got thrown off my bike on a corner,” he said. “I knew the race wasn’t on so I just got back into the group. It’s just frustrating. It was such a freak thing.”

Danish rider Jakob Fuglsang, who stood ninth overall, was not as lucky and was forced to abandon the Tour with a left hand injury after falling late in the stage as the peloton pedaled past the picturesque town of Uzes.

Thomas, a former track specialist who transformed into a Tour de France contender after years spent working in support of four-time champion Chris Froome, has always been prone to crashing. Just last month, his preparation for the Tour was cut short by a spill during a race in Switzerland.

But he has also shown in the past that he can soldier on in pain. Six years ago when riding the Tour as Froome’s loyal teammate, Thomas fell off his bike on a Corsican road in the opening stage and broke his pelvis. But he kept racing for 3,000 kilometers to reach the finish.

He will need to be at the top of his form on Thursday for the start of an Alpine trilogy of stages including six climbs over 2,000 meters. This is when the race — the most exciting in the last decade — will be decided before Sunday’s ceremonial ride to Paris.

Sixteen stages out of 21 have been completed, but the suspense remains intact, with six riders separated by little more than 2 minutes. Behind Alaphilippe and Thomas, Steven Kruijswijk remained third, 1:47 off the pace and 3 seconds ahead of Thibaut Pinot. Thomas’ Ineos teammate Egan Bernal lags 2:02 behind and Emmanuel Buchmann has a 2:14 deficit.

Bernal, a Colombian and one of the best pure climbers in the Tour, played down Thomas’ crash and said the race in the Alps will suit him more than the Pyrenees, where both Ineos leaders conceded time to Pinot.

“He crashed but with no consequence and I don’t think he’ll suffer from it in the coming days,” Bernal said. “We’re approaching the Alps. The climbs there are longer and steeper. They’re more of the Colombian style of climbing. I’m ready and I feel good.”

Ewan said he suffered from the heat throughout the stage — temperatures soared as high as 40 degrees Celsius (40 F) — but it did not slow him down in the finale. The Australian Tour debutant edged Elia Viviani and Dylan Groenewegen to post his second stage win following his maiden success in Toulouse last week.