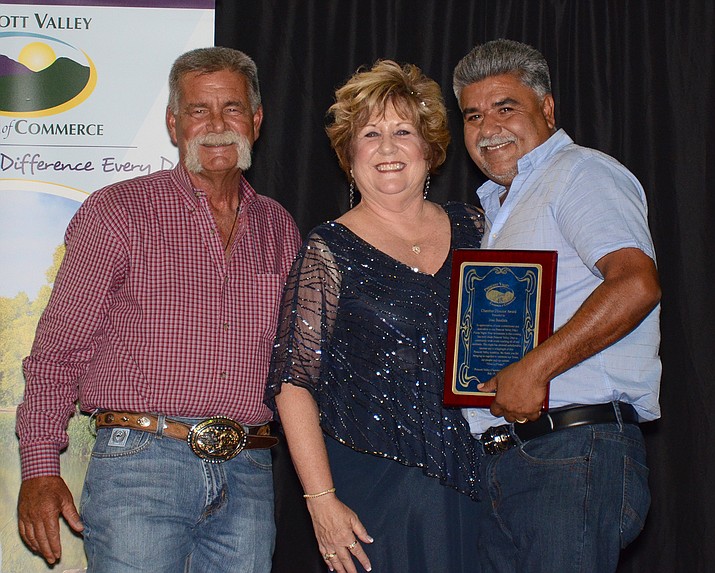 The Prescott Valley Chamber of Commerce conducted its annual awards ceremony and banquet Friday, July 19, at the Findlay Toyota Center. Here are the people and businesses honored for 2019. 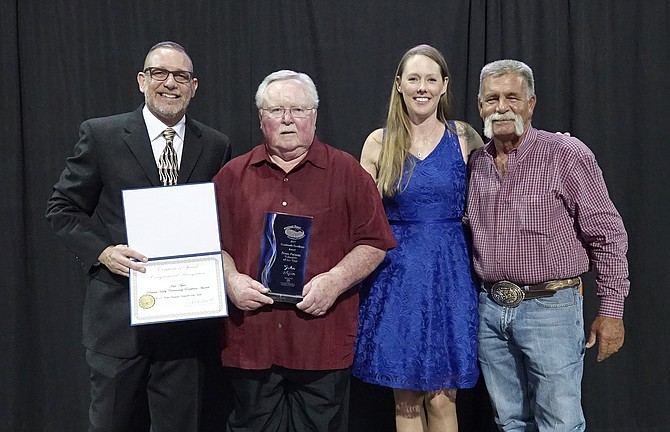 2019 Norm Pariseau Volunteer of the Year award — John Agan’s passion for service to nonprofits, as well as his background in finance, makes him a sought-after volunteer and board member by many organizations. He has been a member of the Prescott Valley Early Bird Lions Club for 13 years, serving in all leadership positions including president; he currently is treasurer. He also is a board member of the Humboldt Education Foundation, Prescott Chamber Orchestra, Prescott Chorale, Prescott Pops Symphony and the Prescott Center for the Arts. 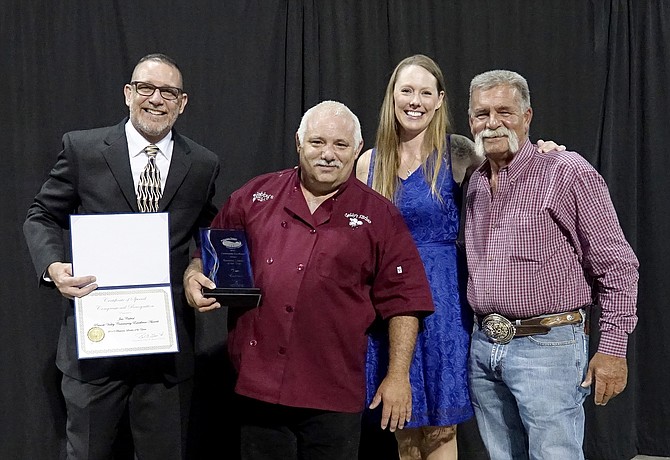 2019 Business Leader of the Year — Jim Cabral owns and operates several Prescott Valley businesses, including Gabby’s Family of Restaurants with five different restaurant and catering operations. He also runs the concession stands at Findlay Toyota Center. He is a big supporter in the community, especially of Bradshaw Mountain High School football team, band, and also youth football organizations. He also is a member of the Chamber’s board of directors. 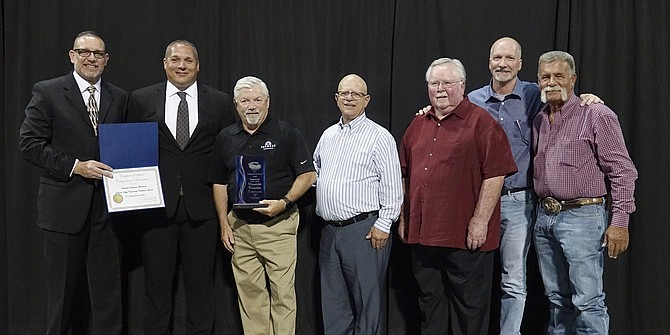 Humboldt Education Foundation receives the 2019 Organization of the Year Award.

2019 Organization of the Year — Humboldt Education Foundation, established in 2015, provides community support for excellence in education throughout the Humboldt Unified School District. One way it impacts students’ lives is by supporting and administering the Hungry Kids Project in Prescott Valley and Dewey-Humboldt, providing food over the weekend for 180 students in need. HEF also recognizes Teachers of the Year on an annual basis, gives grants and scholarships to teachers, and scholarships to graduating seniors. It recently initiated a student orchestra for fifth- and sixth-grade students. 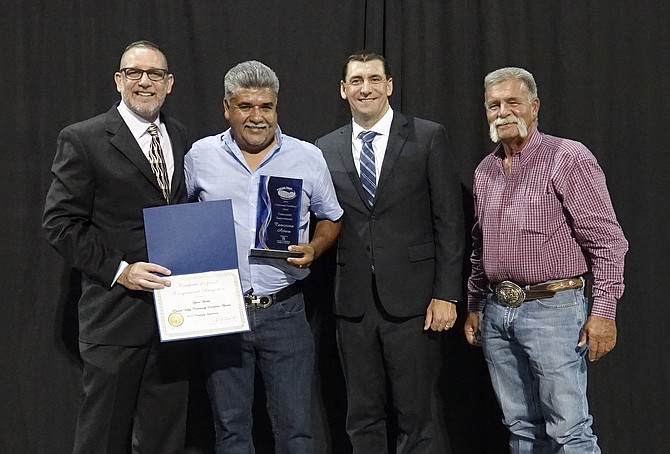 2019 Community Improvement Award (Small) — Owner Jose Bautista took a strip mall on Spouse, which held a variety of miscellaneous businesses, and developed it into a destination marketplace catering to the community with a focus on quality Mexican foods and cuisine, Carniceria Azteca. He developed 4,770 square feet into a new market that offers everything from freshly mesquite-grilled chicken and carne asada to fresh produce, homemade salsas and fresh tortillas with other bakery items. The market also includes a restaurant area that offers an extensive taco menu. Carniceria Azteca has brightened and enhanced the Highway 69 retail corridor and serves as an example of what someone with vision and purpose can accomplish. 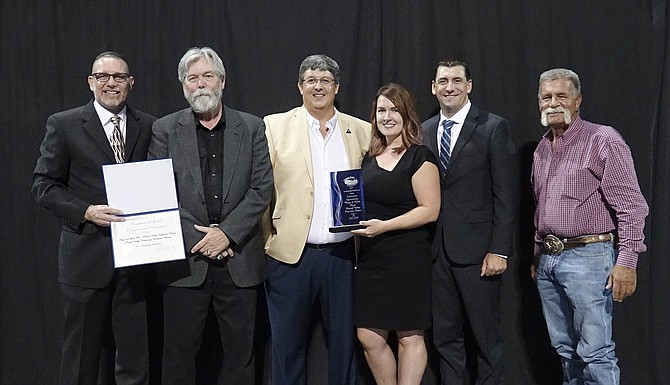 The 2019 Community Improvement Award (large) is given to the Prescott Valley Boys and Girls Club.

2019 Community Improvement Award (Large) — The expansion project on the Boys and Girls Club facility at Loos and Robert roads was much needed in the community. The 10,300-square-foot expansion includes a new NBA-sized gym, training room, restrooms and foyer. A Community Development Block Grant and support from the Fain Family, Massie Foundation, Phoenix Suns Charities, MI Windows and Doors, Musco Lighting, Alliance Lumber, the Boys and Girls Club, and the Town of Prescott Valley Parks and Recreation Department made this project possible. The expansion also will be used by the Northern Arizona Suns as a practice facility, in addition to recreational programming opportunities for town residents. 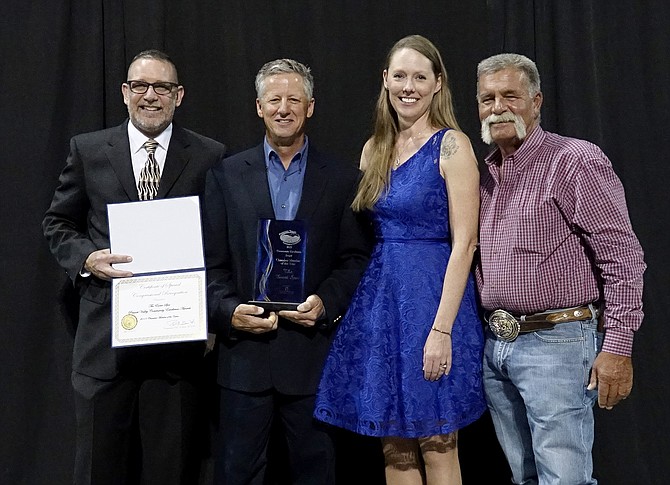 The 2019 Chamber Member of the Year award is presented to Ken Foote, owner of The Event Spot, second from right. Posing with Foote are, from left, Jeff Timm, representative from Rep. Paul Gosar’s office, Erin Vredevelt, past chair, and current chair, Chris Graff.

2019 Chamber Member of the Year — The Event Spot filled a gap in the community’s available meeting spaces with its venue able to accommodate large or small groups for meetings or special occasions. It has hosted workshops birthday parties, receptions and business meetings such as the Chamber Quarterly Breakfasts. It has state-of-the-art audiovisual and computer networks and is considered a first-class meeting place that benefits Prescott Valley. 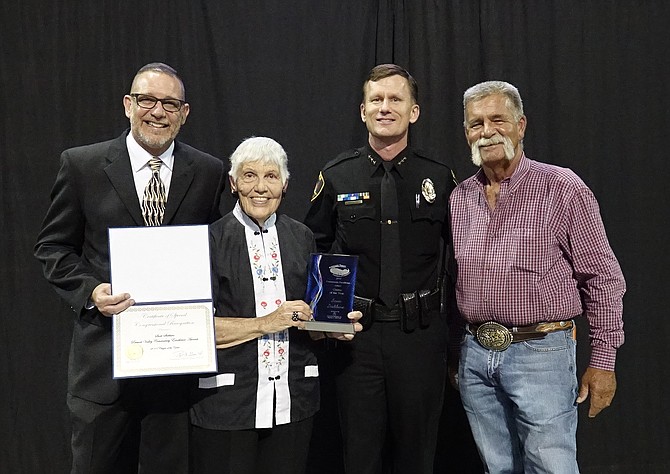 2019 Citizen of the Year — President of Class 1 of the Northern Arizona Regional Training Academy, Lt. Scott Stebbins earned his Arizona certification 30 years ago in the first NARTA class, and continues to work for the Prescott Valley Police Department as one of four lieutenants. He balances his work life with family life with his wife Mistie, five adopted children, and an adult stepson. Recently, Stebbins was nominated at the national level as Veterans of Foreign Wars Law Enforcement Officer of the Year, having earned the award locally from Buckey O’Neill Post 541 and at the state level. 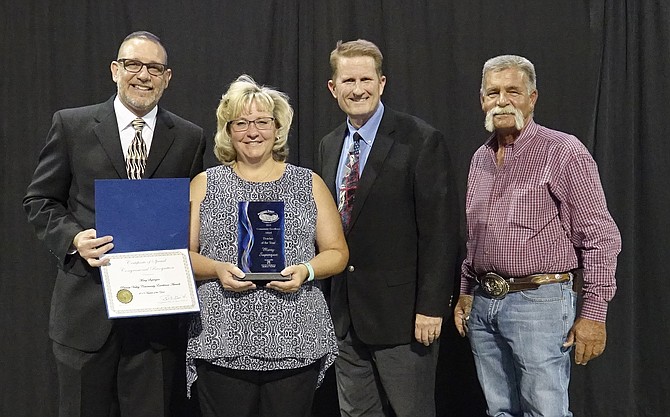 2019 Teacher of the Year — Mary Supergan, 30-year veteran of Humboldt Unified School District, has taught music, choir and theater at Glassford Hill Middle School for the past eight years. She recently directed 12- and 13-year-old students in a production of the musical “Oklahoma.” She also is the school’s Student Council advisor, and organized and participated in taking more than 40 middle school students on an annual Disneyland Leadership Trip for Student Council and National Jr. Honor Society student members. 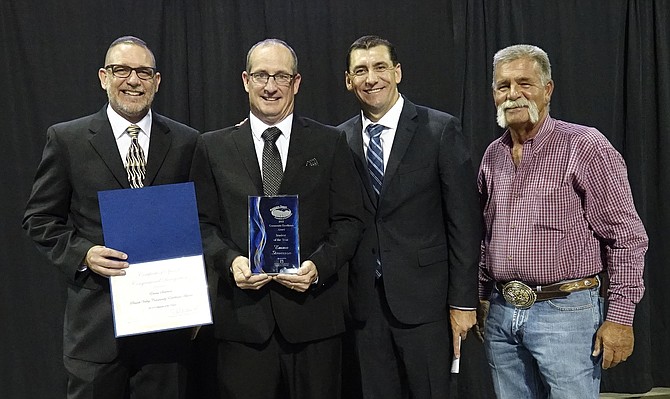 Emma Steverson could not be present to accept the 2019 Student of the Year Award. Accepting for her are Bradshaw Mountain High School Principal Kort Miner, second from left, and HUSD Superintendent Dan Streeter. Jeff Timm, representative from Rep. Paul Gosar’s office, left, and Chamber Chairman Chris Graff pose with them.

2019 Student of the Year — A Class of 2019 graduate of Bradshaw Mountain High School, Emma Steverson ranked in the top 4% of her class. Her musical talent contributed to 17 different musical and theater performances. She sang with the Bradshaw Mountain High School Chamber Choir as well as the Yavapai Youth Choir. In addition, she was section leader for clarinets in the school’s marching band and played in the wind ensemble. She is an active volunteer, peer mentor, and tutor for students with special needs. Emma currently is working at a summer camp for special needs children and was unable to attend the banquet and awards ceremony. 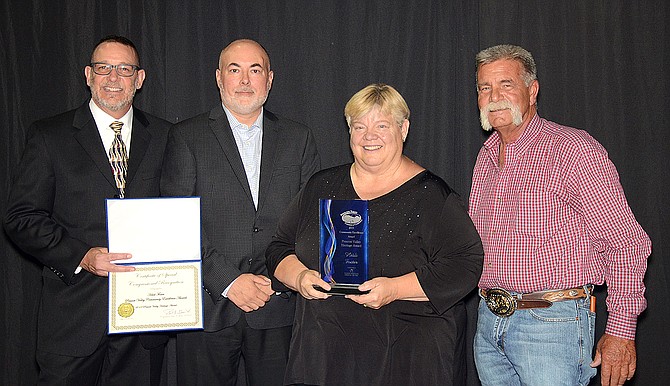 2019 Prescott Valley Chamber Heritage Award — Heidi Dahms Foster, Communications Relations coordinator for the Town of Prescott Valley, worked for many of her 27 years former employment with Prescott News Network as managing editor of the Prescott Valley Tribune. During this time, she was instrumental in organizing community events such as Prescott Valley Days and the Festival of Lights. Now working for the town, she created the Volunteer Central program, and helps with Block Watch and National Night Out activities. She is a gardener, a singer, an award-winning photographer, and continues to write articles for regional and national publications. She and her husband, Randy, raise championship (multiple best of breed) Australian Shepherds.

2019 Special Award — In appreciation for his time, support and contributions to the 26th annual Pronghorn Golf Tournament, the chamber gave a special Volunteer Award to Bob Armbruster. 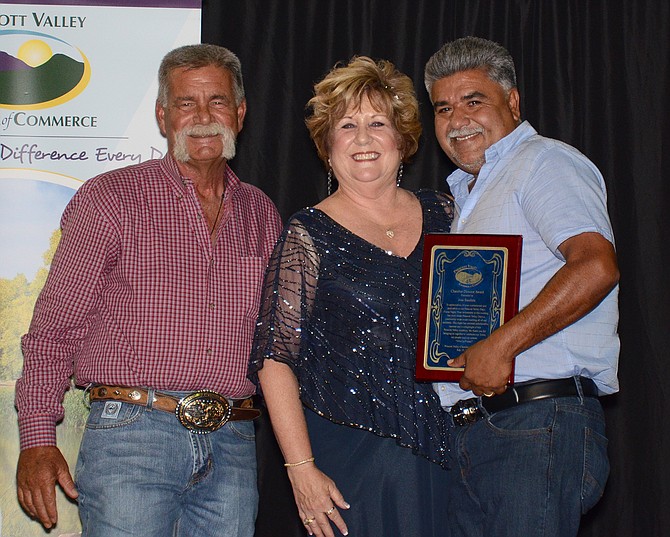 The Chamber gave the 2019 Chamber Director’s Award to Jose Bautista for his commitment and dedication to the Chamber’s Prescott Valley Days Fiesta Night. This community-wide event is a highlight of the Prescott Valley tradition and brings residents together to celebrate the culture of the town. 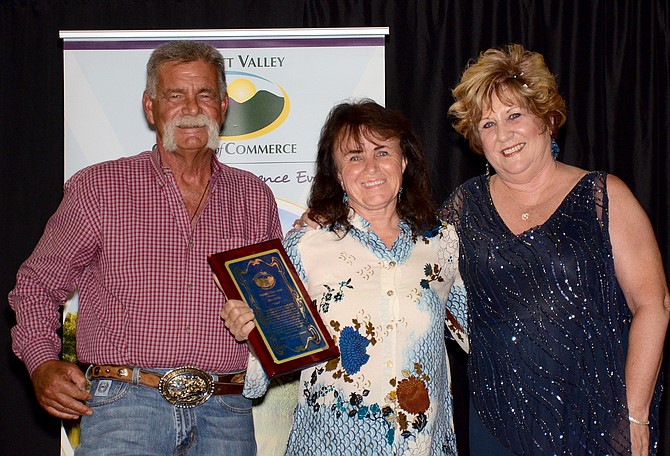 The Chamber honored Darla DeVille with the 2019 President’s Choice Award in appreciation for DeVille’s support, huge smile and her big “Aloha.” She is a leader, an inspiration, and a friend. 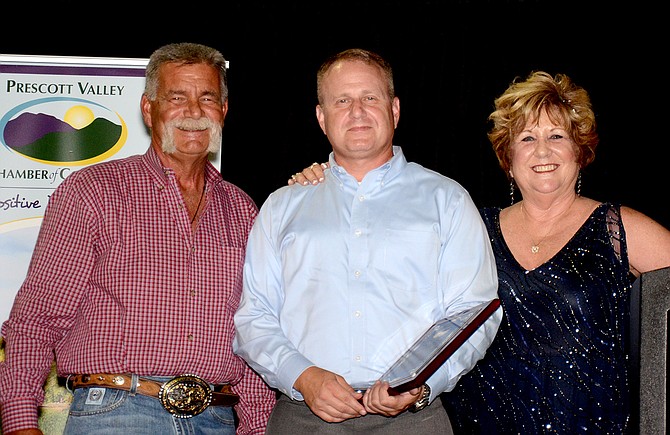 The Chamber honored Central Arizona Fire and Medical Authority with the 2019 Chamber Partner Award for its generous support of the Flying High Turkey Drive and the Team Up to Clean Up events. The relationship between CAFMA and the Chamber is built on mutual respect, support and fun.