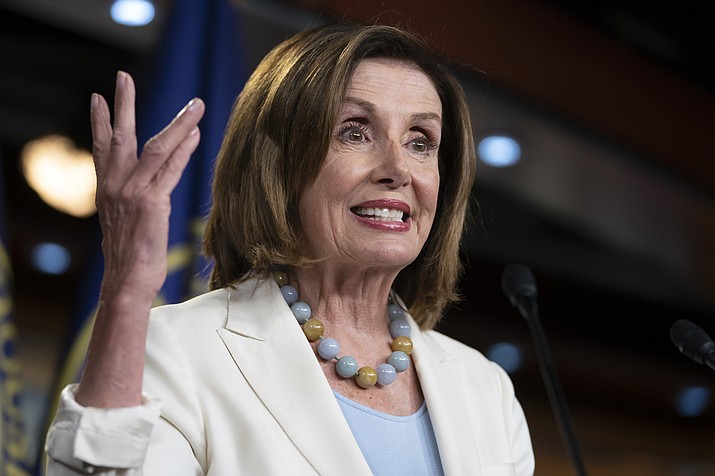 WASHINGTON — The Trump administration and House Speaker Nancy Pelosi are on the cusp of a critical debt and budget agreement, a deal that would amount to an against-the-odds victory for Washington pragmatists seeking to avoid politically dangerous tumult over fiscal deadlines.

Aides on both sides of the talks say the tentative deal would restore the government's ability to borrow to pay its bills into the next administration and build upon recent large budget gains for both the Pentagon and domestic agencies. It would mostly eliminate the risk of a repeat government shutdown this fall.

The agreement is on a broad outline for $1.37 trillion in agency spending next year and would represent a win for lawmakers eager to return Washington to a more predictable path amid political turmoil and polarization, defense hawks determined to cement big military increases and Democrats seeking to protect domestic programs. Nobody can claim a big win, but both sides view it as better than a protracted battle this fall that probably wouldn't end up much differently.

It also comes as budget deficits are rising to $1 trillion levels — requiring the government to borrow a quarter for every dollar the government spends — despite the thriving economy and three rounds of annual Trump budget proposals promising to crack down on the domestic programs that Pelosi is successfully defending now. It ignores warnings from deficit and debt scolds who say the nation's fiscal future is unsustainable and will eventually drag down the economy.

"This agreement is a total abdication of fiscal responsibility by Congress and the president," said Maya MacGuineas, president of the Committee for a Responsible Federal Budget, a Washington advocacy group. "It may end up being the worst budget agreement in our nation's history, proposed at a time when our fiscal conditions are already precarious."

The aides who spoke Monday about the emerging deal did so on the condition of anonymity because they were not authorized to speak on the record before a deal was final. A person close to the talks said final obstacles are down to technical issues.

A push by the White House and House GOP forces for new offsetting spending cuts was largely jettisoned, though Pelosi, D-Calif., has given assurances about not seeking to use the follow-up spending bills as vehicles for aggressively liberal policy initiatives.

Fights over President Donald Trump's U.S.-Mexico border wall, other immigration-related issues and spending priorities will be rejoined on follow-up spending bills that are likely to produce much the same result as current law. The House has passed most of its bills, using far higher levels for domestic spending. Senate measures will follow this fall, with levels reflecting the accord.

At issue are two separate but pressing items on Washington's must-do agenda: increasing the debt limit to avert a first-ever default on U.S. payments and acting to set overall spending limits and prevent automatic spending cuts from hitting the Pentagon and domestic agencies in January.

The threat of the automatic cuts represents the last gasp of a failed 2011 budget and debt pact between former President Barack Obama and then-Speaker John Boehner, R-Ohio, that promised future spending and deficit cuts to cover a $2 trillion increase in the debt. But a bipartisan deficit "supercommittee" failed to deliver, and lawmakers were unwilling to live with the follow-up cuts to defense and domestic accounts. This is the fourth deal since 2013 to reverse those cuts.

Mnuchin was eager to avert a crisis over the government's debt limit. There's some risk of a first-ever U.S. default in September, and that has added urgency to the negotiations.

The pact would defuse the debt limit issue for two years, meaning that Trump or his Democratic successor would not have to confront the politically difficult issue until well into 2021.

Details on spending levels have been kept under wraps so far, but the complicated accounting under Washington's arcane budget rules gives each side a way to paint the numbers favorably. Generally speaking, the deal would lock in place big increases won by both sides in a 2018 pact driven by the demands of GOP defense hawks and award future increases consistent with low inflation.

Pelosi was positioned to claim rough parity between increases for defense and nondefense programs, but the veteran negotiator retreated on her push for a special carve-out for a newly reauthorized program for veterans utilizing private sector health care providers.

In the end, domestic programs would on average receive 4% increases in the first year of the pact, with much of those gains eaten up by veterans increases and an unavoidable surge for the U.S. Census. Defense would jump to $738 billion next year, a 3% hike.

Trump retains flexibility to transfer money between accounts, which raises the possibility of attempted transfers for building border barriers.

The results are likely to displease many on both sides, especially Washington's weakening deficit hawks and liberals demanding greater spending for progressive priorities. But Pelosi and McConnell have longtime histories with the Capitol's appropriations process and have forged a powerful alliance to deliver prior spending and debt deals.

If sealed Monday, the measure would first advance through the House this week and win the Senate's endorsement next week before Congress takes its annual August recess.

Trump has yet to weigh in publicly, and his options seem limited, especially if the deal receives strong votes in both the Democratic-controlled House and the GOP-held Senate. Any veto threat or other blow-up that craters the deal would create a crisis that would be rejoined in September and generate more losers.